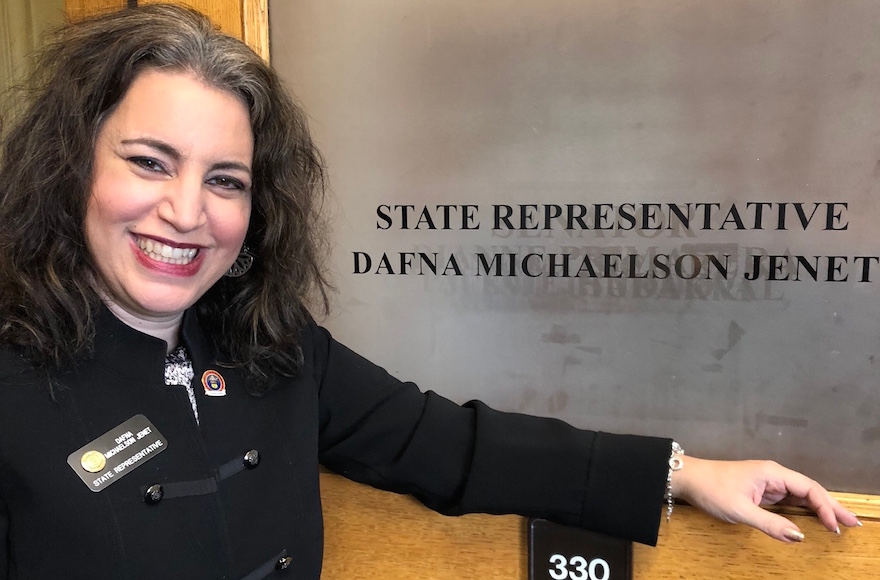 Dafna Michaelson Jenet says her experiences in BBYO and Hadassah gave her “the underpinnings I needed to be a legislator.” (Sophia Laster)

(JTA) — Dafna Michaelson Jenet traces her political career back to conversations around the Shabbat table as a 14-year-old. She remembers hearing her parents and their friends discuss the challenges facing Cincinnati, where they were living. But the conversations would quickly be forgotten once the day of rest came to an end.

“I was distressed by this because I truly believed that they had the answer to the problems that I cared strongly about, that were plaguing our community, and they didn’t fix them,” Michaelson Jenet said.

That feeling led Michaelson Jenet, now 45, to resolve not to complain about problems unless she was willing to solve them, a promise she calls “a driving factor” in her life.

After a career in nonprofit organizations and a yearlong trip around the country, which she documented in a book, the promise led her to local politics in Colorado, where she currently lives.

In 2016, she was elected to the Colorado House of Representatives as a Democrat with the endorsement of President Barack Obama. Last week, Obama again endorsed her, along with 80 other Democrats, ahead of the November midterm elections.

Michaelson Jenet’s legislative focus is on helping struggling youth, a passion that stems from the challenges faced by her son, Eytan, 16. He struggles with a severe learning disability but was unable to qualify for an individualized education plan in school, a setback that Michaelson Jenet believes contributed to his attempted suicide at age 9.

“I knew that I had the access, the privilege, the means to be able to get my son the help he needed, and I was still failing my son, failing him so much that he wanted to end his life,” she told JTA in a phone interview Tuesday.

Through volunteering at juvenile correction facilities, Michaelson Jenet came in contact with boys who faced similar problems but had far fewer resources available to them than her son.

“Who was fighting for them? Ultimately when I was asked to run for this seat, I realized that I could make such a significant difference for children like my son and that I could work to end youth incarceration,” she said.

Michaelson Jenet has introduced a number of bills to help young people in her state, including to allow children as young as 12 to obtain confidential mental health services. Other measures expand access to free school lunches and provide sexual abuse prevention training to early childhood providers.

Her journey to politics was a roundabout one. In 2008, she decided to quit her job at a Denver hospital in order to travel America and meet with people who were making a difference in their communities. Each week she visited a new state. Her subjects ranged from Alfred Tibor, a well-known sculptor who created art to commemorate the Holocaust, to a woman in a small community in Alabama who started an afterschool program to keep local youth from becoming involved in gun violence.

Michaelson Jenet filmed the encounters and wrote about them on a blog.

“No matter what they looked like, what they sounded like, how much money or education they had, I [felt I] could show people that they had the power to solve the problems in their communities,” she said.

The project caught the attention of writer Maya Angelou, who interviewed her on the “Oprah Radio Show.” Michaelson Jenet also spoke about her journey on “CBS Sunday Morning.”

In 2015, as Michaelson Jenet was working on a book about her trip, she ran into a local politician who suggested she run for office. A year later she defeated Republican incumbent JoAnn Windholz by an 8 percent margin.

Michaelson Jenet was born in Tel Aviv, and her parents moved to the United States when she was a baby. She grew up in an Orthodox household, but struggled with her religious identity. She recalled being asked not to sing at the Shabbat table when she was 12 since her stepbrother was observing a law forbidding men from hearing a women’s singing voice.

“I had to silence myself, so that the whole family could be at the table, and that was the kind of not fitting in that went on through my life,” she said.

Michaelson Jenet felt more at home in non-Orthodox Jewish settings and said her experiences in BBYO, a nondenominational Jewish youth group, and Hadassah, a women’s Zionist organization, gave her “the underpinnings I needed to be a legislator.”

Another challenge to her faith came when after divorcing her first husband, she fell in love with a non-Jewish man. Michaelson Jenet remembers visiting the Western Wall during a trip to Israel and asking God for clarity.

“Why do you put this man in my life who isn’t Jewish and is the best thing that ever happened to me? Clearly he’s my bashert,” she remembers saying, using the Yiddish word for soulmate.

The two eventually ended up marrying, though the decision led to several family members cutting ties with her.

Today, Michaelson Jenet is involved with two Conservative synagogues, the Hebrew Educational Alliance in Denver and Congregation Bonai Shalom in Boulder. She calls her husband “the greatest enabler of my faith.”

Prior to entering politics, Michaelson Jenet worked as director of the Holocaust Awareness Institute at the University of Denver and, before moving to Colorado with her first husband, ran March of the Living for the Board of Jewish Education of Greater New York. While working for March of the Living, she ended up taking Jared Kushner, then 17 years old, on one of its pilgrimages to Auschwitz.

Though Michaelson Jenet is no longer in touch with Kushner, who went on to marry Ivanka Trump and is now a key adviser to her father, President Donald Trump, she remembers him fondly as a teenager.

“He was amazing, he was adorable,” she said. “He really liked our kids from Denver, he ended up dating one for a little while, and when he married Ivanka and all of this stuff, quite frankly I’m like ‘Oh no, Jared,’” she said.

Michaelson Jenet says that being part of a political campaign in 2016, when Hillary Clinton ran for president, was “an unbelievable time to run for office and be a woman.”

Under the Trump administration, she is focused on protecting rights for Colorado residents that she believes could be at risk, including women’s reproductive rights.

“I am really grateful that I am elected to serve in a state legislature, and we are authorized under the 10th Amendment to do what we need to do to run our state,” she said. “That means that if I see something coming down the pipe that I think is going to be harmful to my citizens, I can run a bill to protect them.”