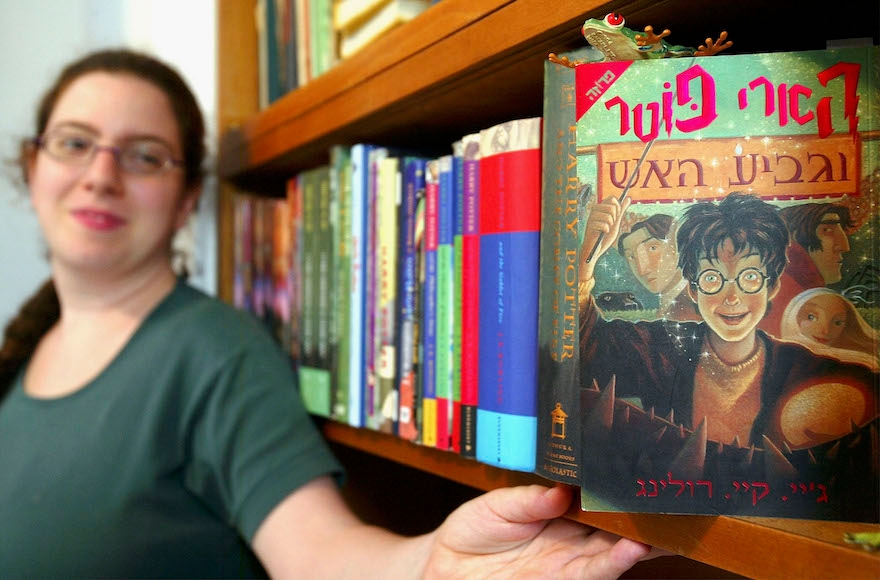 Gili Bar-Hillel with her Hebrew-language version of “Harry Potter and the Goblet of Fire,” one of the four Harry Potter books she translated, in her Tel Aviv office, June 23, 2003. (David Silverman/Getty Images)

(JTA) — If you read the “Harry Potter” series in Hebrew you may have noticed a curious Jewish fact: Though Sirius Black isn’t Jewish, the character sings a Hanukkah song in one scene.

Instead, she referenced a well-known Hanukkah song, “Mi Yimallel (Gvurot Yisrael)” so that Jewish readers would be able to relate.

“There were fans who ridiculed this and said that I was trying to convert Harry to Judaism, but really the point was just to convey the cheer and festivity of making up words to a holiday song,” she said. “I don’t think any of the characters come off as obviously Christian, other than in a vague sort of cultural way, so I didn’t feel it was a huge deal if I substituted one seasonal holiday for another!”

That wasn’t Bar Hillel’s only translation dilemma. She struggled with finding the right phrase for “Pensieve,” a container used to store memories. After weeks of thinking, she came up with the term “Hagigit.”

The phrase is “a portmanteau of ‘hagig’ — a fleeting idea — and ‘gigit’ — a washtub,” Bar Hillel said.

It doesn’t seem like author J.K. Rowling would mind the liberties Bar Hillel took. The British author has recently become a vocal critic of anti-Semitism, using Twitter to call out people peddling anti-Jewish arguments.  Her latest book even includes a villain whose obsessive hatred of Zionism turns into anti-Semitism.

The post How a Hanukkah song made its way into the Hebrew translation of Harry Potter appeared first on Jewish Telegraphic Agency.