How a Guggenheim helped put modern Israeli art on the map

TEL AVIV (JTA) — In 1952, Israel had its third showing at the Venice Biennale, one of the world’s most prestigious art shows, with an exhibition of three painters — Reuven Rubin, Marcel Janco and Moshe Mokady.

Israeli contemporary art is “as young as the new Jewish settlement,” wrote Eugene Kolb, director of the Tel Aviv Museum of Art and curator of the 1952 Israeli exhibition, in the show’s catalog. “Artists of Israel seek, through different individual ways, something that is common to them all, to try to represent the characteristic spirit of their country, nature and people.”

Among the visitors impressed by the Israeli showcase was the American Jewish art collector and patron Peggy Guggenheim — daughter of businessman Benjamin Guggenheim, who was killed on the Titanic, and niece of Solomon Guggenheim, who established the eponymous museum in New York City.

She would end up gifting 16 oil paintings and 20 works on paper to the Tel Aviv Museum of Art — her largest donation to a single museum apart from the gift of her entire collection to her uncle’s Solomon R. Guggenheim Foundation upon her death.

The move would help jump-start the Tel Aviv museum’s collection, and more significantly position Israel as a player in the international contemporary art scene.

Guggenheim’s home in Venice was already a fixture by 1952, when Kolb accompanied 54 canvases from Tel Aviv’s Rothschild Boulevard along the canals of northern Italian city. Hailing from the established Guggenheim and Seligman families of New York, Guggenheim used her inheritance to amass and exhibit a collection of groundbreaking contemporary art. When she made Venice her permanent home in 1947, she was celebrated for bringing cubism and kinetic sculpture to a city heralded for its traditional Titians and Tintorettos.

Guggenheim moved to an unfinished 18th-century palace along the Grand Canal, the Palazzo Venier dei Leoni, which quickly became an art destination. As of 1951, she opened her palatial home to the public three afternoons a week from April through October. There they could enjoy the surrealist and abstract paintings, a custom Alexander Calder-designed bed head and an array of sculptures (including Marino Marini’s nude equestrian figure with a detachable penis). This schedule continued until her death in 1979, when the palazzo became an eponymous popular museum operated by the Guggenheim Foundation. 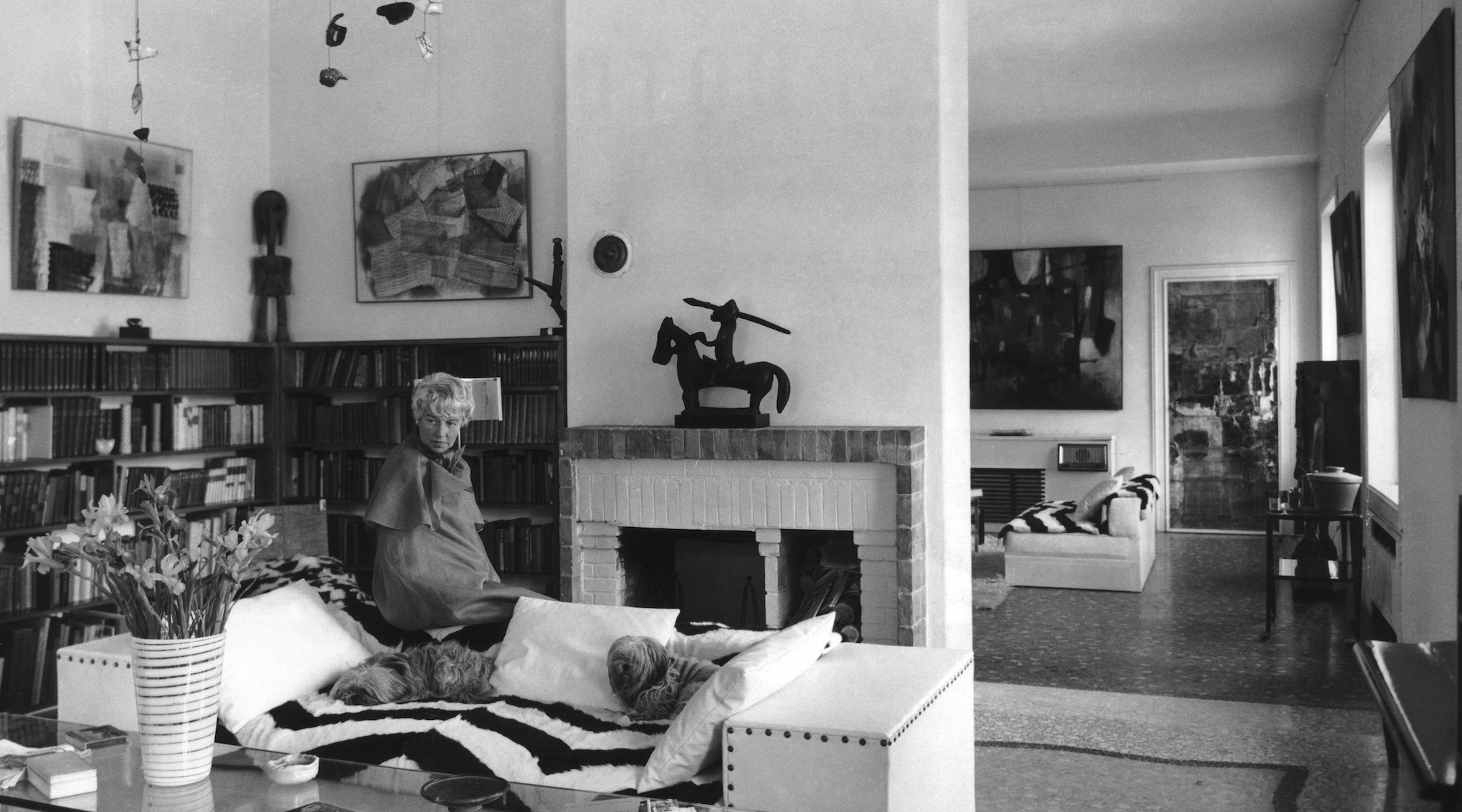 Guggenheim at her home in Venice with her dogs, December 1961. (Keystone Features/Hulton Archive/Getty Images)

And so in addition to ensuring the safe arrival and proper installation of Israeli paintings at the 1952 Biennale, Kolb knew to include a visit to Guggenheim on his itinerary. He went to her palazzo numerous times, and eventually asked the celebrated collector to lend some paintings to the Tel Aviv Museum of Art for an exhibition.

“He asked me to lend him a large number of pictures to show there,” Guggenheim later recalled in her autobiography. “I gave him 34, and later some more.”

What Kolb had conservatively requested as a loan became, at Guggenheim’s initiative, a substantial gift of 36 artworks. In her autobiography, Guggenheim downplays the donation as a convenient way to rid her damp basement of an overflow of paintings. But that was likely a way to minimize the weight of this deliberate gesture, which linked Guggenheim with her Jewish heritage.

“[Guggenheim’s] harrowing experiences fleeing Europe during WWII and the social discrimination she faced in the U.S. both before and after the war, as well as what we could call the ‘Jewishness’ or Jewish aspects of the avant-grade milieu of her adult life that included many Jewish artists, patrons and collectors, and her lifelong connections to her Jewish family are all elements that speak to Guggenheim’s Jewish identity,” Jill Fields, a history professor at California State University, Fresno, told the Jewish Telegraphic Agency.

During her lifetime, Guggenheim donated artworks to over 20 institutions, mostly in American cities that lacked access to surrealist and abstract artworks, such as Phoenix, Kansas City and Raleigh. But none other than the Tel Aviv museum were located outside the United States.

“Guggenheim made this major gift to an Israeli museum because she was Jewish,” Fields said. “Being Jewish had remained meaningful for her despite her secular adult life amidst the avant-garde art world.”

“Your gesture shows real understanding for the needs and troubles of our young institution to get our public acquainted with such important trends of this century’s art,” Kolb said in a 1953 letter thanking Guggenheim now located in the Tel Aviv museum’s archives.

To show off this new boon to the museum’s collection, Kolb curated an exhibition in 1955 showcasing Guggenheim’s gift titled “Abstract and Surrealist Paintings.” The show was the first of its kind in Israel and attracted over 50,000 visitors to the museum’s original building at 16 Rothschild Blvd. The museum was then unaccustomed to such crowds, except for when its ground floor galleries were used as the site of the Declaration of the Establishment of the State of Israel a few years earlier, in 1948.

“At the time, the museum didn’t have a lot of international works, especially important contemporary works,” Sophia Berry Lifschitz, assistant curator of modern art at the museum, explained to JTA. “It was very important to show Israeli audiences what was happening overseas, both in the United States and in Europe, especially with regards to American abstraction and surrealism.”

Though infinitely smaller and narrower in scope, the 1955 exhibition replicated the Venice Biennale in its presentation of art trends of the moment.

“This is an important exhibition,” concluded a review of the show in The Jerusalem Post, “which should not be missed by anyone desiring to know more of the international art situation.” 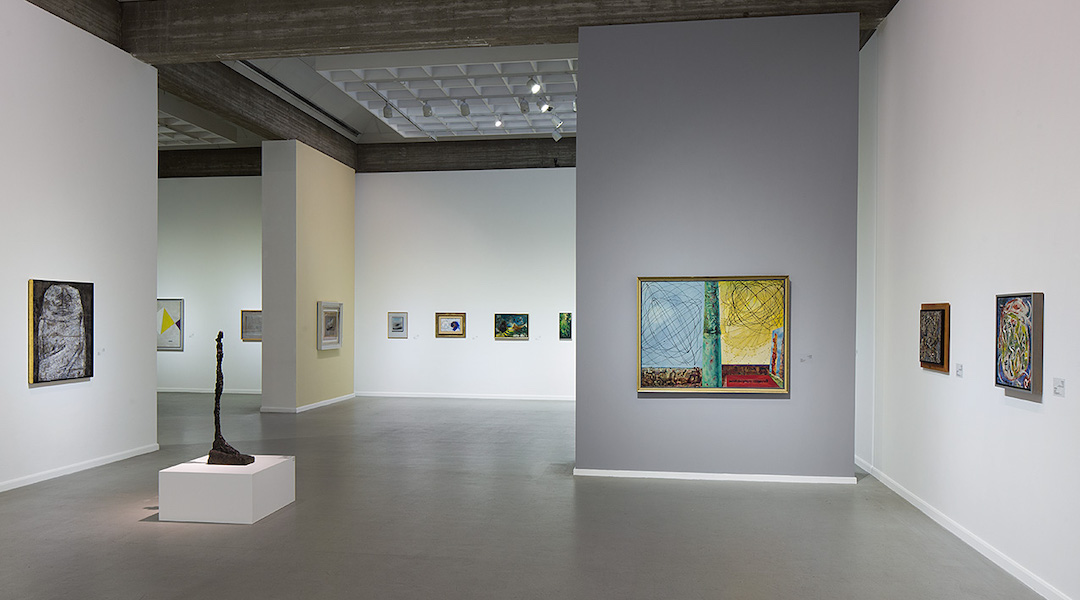 A view of the permanent display of the works from Guggenheim’s collection at the Yehuda Assia Gallery of the Tel Aviv Museum of Art. (Elad Sarig)

Despite Kolb’s repeated invitations to Tel Aviv, Guggenheim herself remained in her adopted home of Venice. Save for a short stopover in Jerusalem in 1924 as part of a larger Middle Eastern tour, she never visited the Holy Land.

“I do not give up hope to see you one day here in Israel,” Kolb exasperatedly wrote Guggenheim in a 1955 letter.

“I’m terribly sorry not to see the show,” she replied. “I wish you great success.”

This year at the Biennale, which opens May 11, the Israeli showcase is “Field Hospital X,” by Aya Ben Ron. It simulates a health clinic where visitors sit in a waiting room before proceeding to watch videos packaged in “care-kits.” Each video addresses a different social injustice through a specific story and contains “second opinions” — commentary by experts in relevant fields.

Its artistic team says the project “is committed to researching the way art can react and act in the face of social ills.” The exhibition will tour internationally following the Biennale.

So even though Guggenheim never made it to Tel Aviv, her gift — which allowed Israelis to glimpse artistic possibilities that cross borders, boundaries and genres — lives on.