MUNICH (JTA) — Walking alongside two young men around this city’s main synagogue, Charlotte Knobloch looks like a Jewish grandmother enjoying a stroll with her grandsons.

Knobloch, the 89-year-old president of the Jewish Community of Munich and upper Bavaria and likely the only Holocaust survivor leading a large Jewish community today, is indeed a grandmother of seven. But the men are not related to her.

They are police officers belonging to a security detail that was assigned to her years ago in connection with threats on Knobloch’s life by neo-Nazis.

One of the best-known Jews living in Germany today, Knobloch’s personal life story is intertwined with the unlikely revival of German Jewry after the Holocaust — and the growing uncertainty about its future.

She spoke about both narratives — the personal and the communal —  in her direct and candid style during an interview with the Jewish Telegraphic Agency on a chilly morning last month outside her office, which was closed to outside visitors due to COVID-19 measures.

“This is the time we are living in,” Knobloch said. “Antisemitism has always existed in Germany and beyond. It just moved to the background after World War II and has reemerged recently, hardened and ugly. That’s why I have police protection.”

Knobloch is also a specific target due to her penchant for speaking out against Germany’s rising far right, including the Alternative for Germany party, or AfD. Created in 2013, it has since doubled its membership to 32,000 and garnered 10% of the vote in the 2021 federal elections.

A attorney’s daughter who served as a one-time deputy in Germany’s Federal Assembly — a special chamber whose members elect the president — Knobloch in 2019 singled out the AfD in a speech during a Holocaust commemoration at the Bavarian State Parliament.

A departure from the unwritten rule against bringing politics into such events — especially by representatives of nonpartisan Jewish communities — her speech prompted the AfD faction to walk out of parliament in protest, in what the Süddeutsche Zeitung daily described as a “scandal.”

The “so-called Alternative for Germany bases its policy on hatred and exclusion,” she said in her speech about the party, which seeks to limit immigration to Germany and has had supporters and leaders who downplayed the Holocaust. Her speech led to a torrent of hate mail and threats on her life. 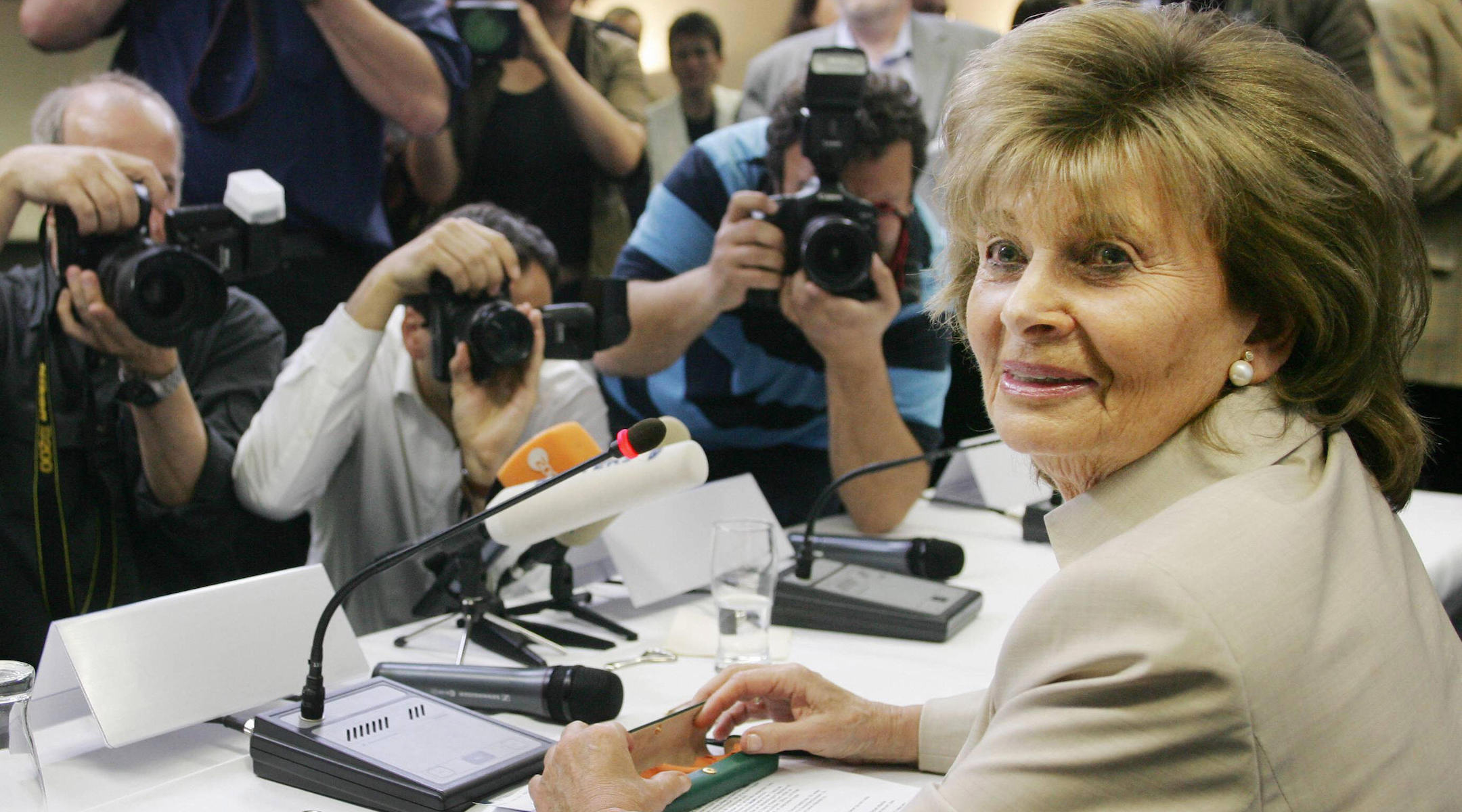 Charlotte Knobloch at a press conference in 2006 after being elected president of Germany’s Central Council of Jews, in Frankfurt am Main, Germany, June 7, 2006. (Thomas Lohnes/DDP/AFP via Getty Images)

But the issue runs deeper than any one particular party, Knobloch said.

“Yes, it’s necessary,” she said of the security detail. “When I walk on the street, a lot of people who recognize me greet me or smile. But there are others who look, and you can see what they’re thinking. The concern is that one of them might decide to do more than just look.”

In 2019, a far-right armed terrorist tried to break into a crowded synagogue in Halle, a city about 80 miles southwest of Berlin. He killed two people, a patron at a kebab shop and a passerby, on the street after failing to enter the synagogue.

Almost half of the 522 antisemitic incidents recorded by the RIAS watchdog group in the first half of 2021 occurred in May, when Israel was exchanging fire with Hamas in Gaza.

There are also positive developments connected to German Jewry, Knobloch noted: The government this year is celebrating 1,700 years of documented Jewish presence in Germany in a series of events and projects. A Jewish group is returning to the Cologne annual carnival for the first time since the Nazis banned Jews from attending. There was the inauguration this year of the first Jewish chaplain in the German army in decades, and a flurry of Jewish themes in mainstream entertainment in Germany.

Knobloch is widely credited with spearheading the Jewish revival in her native Munich. She was the driving force behind the 2006 opening of a $51 million Jewish community center and synagogue. She began focusing on that project after leading the communal effort to absorb thousands of Jewish immigrants from the former Soviet Union.

A talented administrator with extensive connections in government, the media and beyond, Knobloch is Munich’s “iron lady,” said Gady Gronich, the Munich-based CEO of the Conference of European Rabbis.

“You saw it in the COVID-19 crisis,” he said. “At a time when Munich had one centralized vaccination point with a line half a mile long, Charlotte got the health department to include the Jewish community in the program and particularly to make sure that the remaining Holocaust survivors would get their shots as quickly as possible. After that, vaccinations for members of all age groups continued until the summer.”

Knobloch dismissed it as “a matter of making some phone calls.”

What made her happy, she said, “is that we had this facility.” She gestured at the community center and the adjacent synagogue, an imposing building and complex that dominate the centrally located St. Jacob Square. “It puts us on the map. And it makes me elated every time I see it, which is several times a day.”

Being a Holocaust survivor has little bearing on her policies as the leader of Munich’s Jewish community, which is Germany’s second-largest with 9,500 members, according to the Institute for Jewish Policy Research. “It does give me a certain perspective on how precious all this is,” she said, gesturing at her community’s beating heart. “And how close we came to having nothing at all.”

But the future overall seems uncertain for German Jewry, according to Knobloch, a former president of the Central Council of Jews in Germany, the main representative group of organized Jewish communities in the country.

“We need to hang in and hope for better days,” she said. “They won’t come soon. Certainly not in my lifetime. Maybe they won’t come at all. But we have to hope.”

Knobloch knows something about hoping for the best in desperate circumstances.

In 1942, when she was 10, her father, Fritz Neuland, arranged for her to go into hiding in a small town with the family of a Catholic woman, Kreszentia Hummel. The locals assumed that Knobloch was Hummel’s illegitimate daughter — an ignominy the woman endured to save Knobloch’s life.

“I was alone but I never forgot who I was, my Jewish identity,” she said of the three years she spent with Hummel. 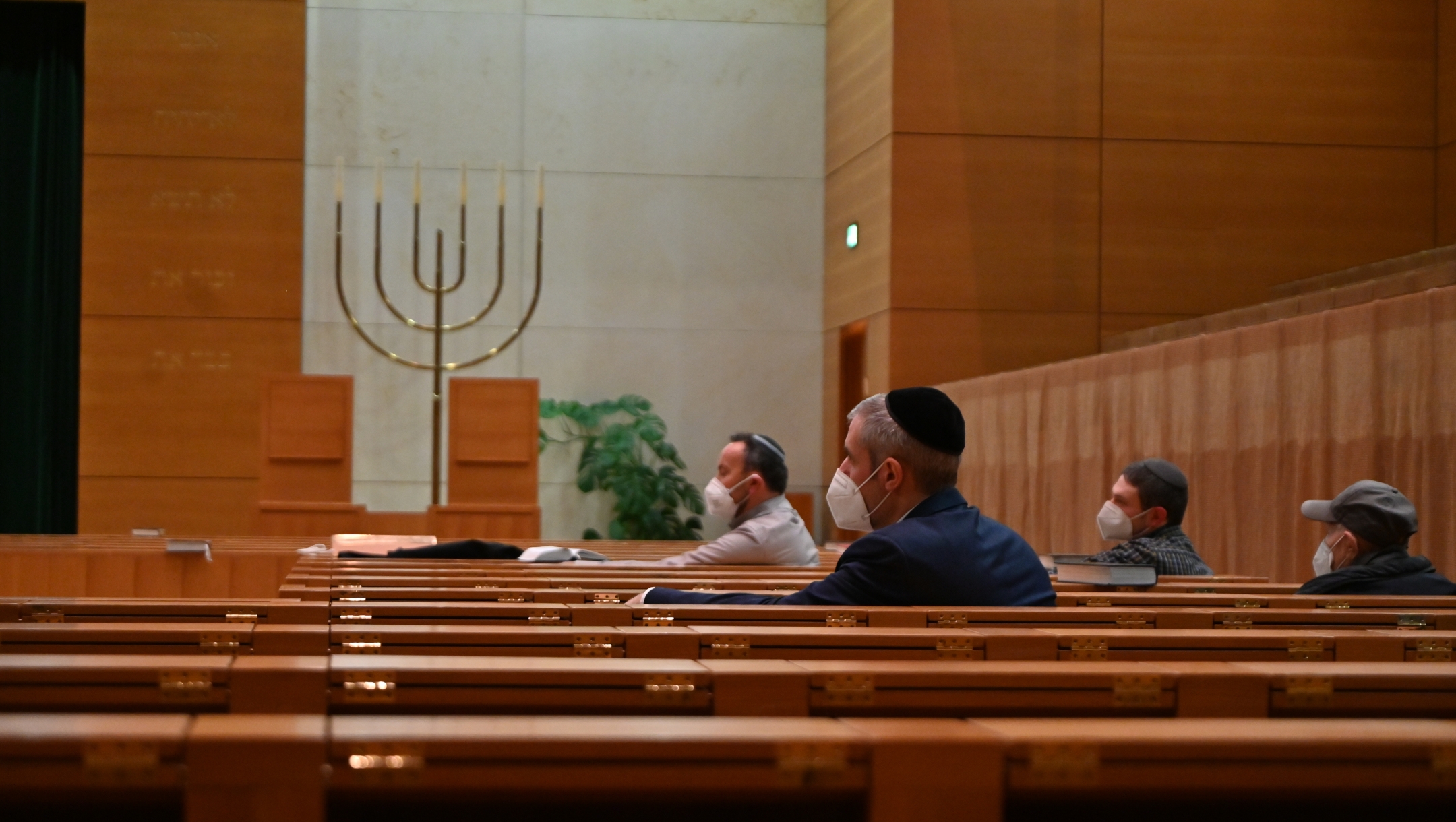 Religious issues had strained relations between Charlotte’s father and his family, Knobloch said in an interview in April for the WDR radio station. Her mother eventually abandoned her husband and her young daughter in their time of need. That impacted Knobloch for the rest of her life, she told WDR.

“No, you can’t forgive something like that, naturally,” Knobloch said.

Knobloch developed a deep attachment to her paternal grandmother, Albertine Neuland, who taught her the principles of Judaism and served as her first female role model.

“She was an extremely religious woman. She loved religion and practiced it to the fullest,” Knobloch told WDR. “And this deep piety did not prevent her from dedicating herself to life and enjoying it.”

But weeks before Knobloch went into hiding with the Hummels, her grandmother was deported to Theresienstadt, a concentration camp from which she never returned.

Knobloch and her father, who also survived the Holocaust, returned to Munich after the war. There were almost no Jews in a city whose Jewish population had numbered 10,000 in 1933.

In the 1940s, Munich’s once-great Jewish community “was crushed, its few survivors haunted by the ordeals they had experienced,” Knobloch recalled to JTA.

“There were people who didn’t understand at all that they survived, and even regretted it,” she told WDR. “The fact that their children, their parents, were murdered, whereas they survived — they hardly forgave themselves that.”

But there was also a desire among survivors “to celebrate life, to celebrate survival,” Knobloch said in the WDR interview, adding that she now finds this “almost unbelievable.”

It was at one such celebration in 1948, a Purim party for Jewish teenagers, that Knobloch, then 15 years old, met her future husband. Samuel Knobloch, a refugee from Poland whose entire family was murdered, planned to emigrate to Australia.

During her wedding in 1951, her father, who had been adamant in his refusal to either leave Germany or let his daughter go, finally gave them their blessing during an emotional farewell speech, wishing the newlyweds best of luck and causing many of the guests to shed tears.

“He had been furious and begged me to stay beforehand many times, but that didn’t impress me back then,” she said of her father’s position. “I was sad, but I just wanted to leave the country.”

The couple decided to move to the United States instead of Australia. Charlotte, whose father was a jurist, intellectual and lover of fine art, trained as a dressmaker to improve her chances of getting a visa and employment in the States. The couple had jobs lined up for them in St. Louis, Missouri, through HIAS, the Jewish immigrant aid service.

She doesn’t regret staying in Munich. 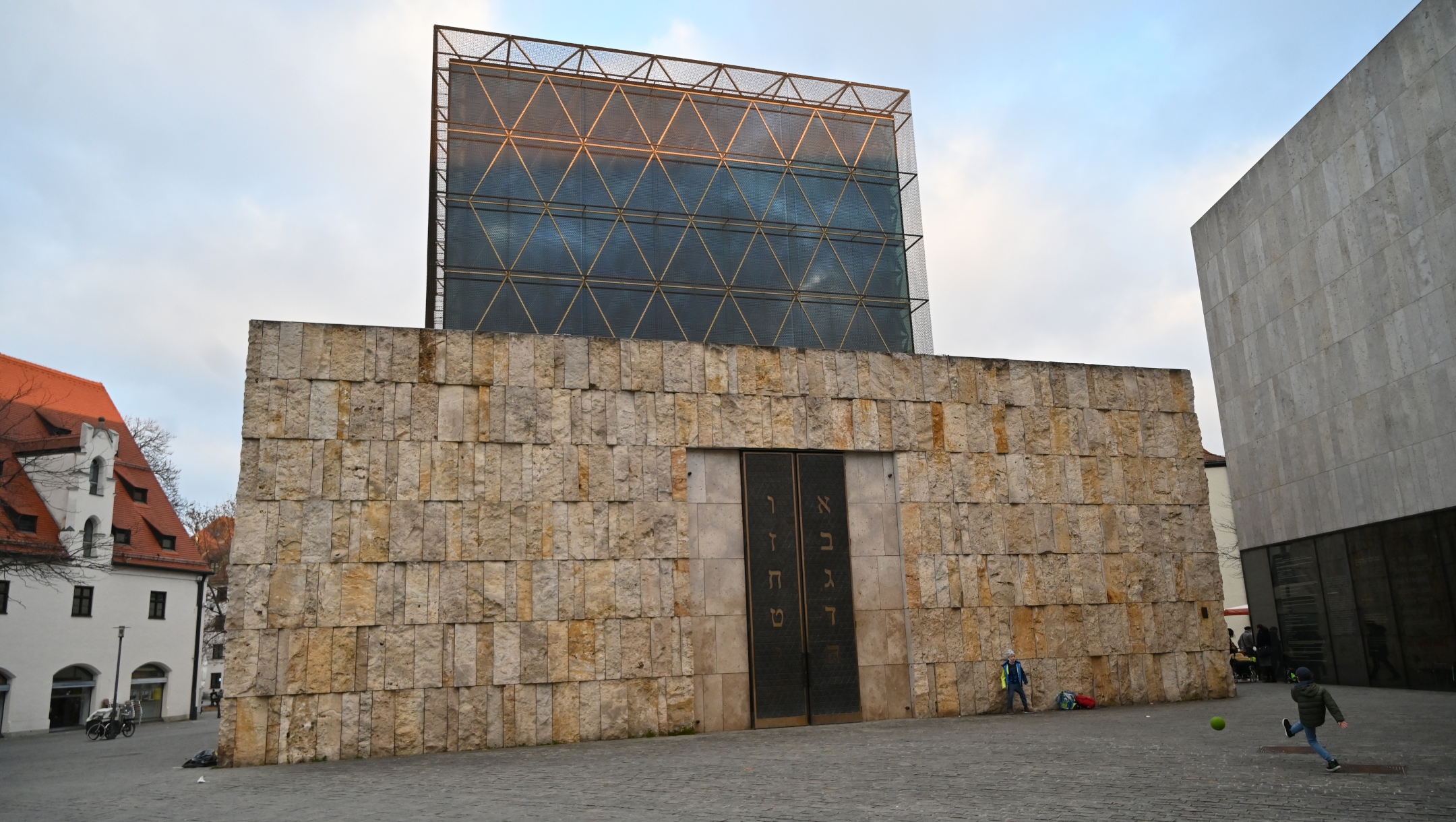 “To be a part of something like this, to rebuild Jewish life in Germany after such a tragedy, I’m very grateful that I have been able to play a part in something historic,” she said.

Knobloch, who grew up with few expressions of affection from her parents, devoted herself to raising her children, becoming a full-time mother. (She often says that “raising children is too important to delegate to strangers.”)

But as her children grew older, Knobloch devoted herself to Jewish communal life. She was elected as head of her community in 1985. When the Soviet Union collapsed, caring for the newcomers became her main occupation.

Her three children have given her seven grandchildren and five great-grandchildren. None live in Munich, and most live abroad, including Israel and the United Kingdom.

“They come on holidays and it’s very nice. And this,” she said, pointing at the Jewish community center where her office is located, “this is my life.”