Netanyahu has justified his outreach to leaders in countries like Poland and Hungary as a way to  counterbalance the E.U.’s more Palestinian-friendly western states.

But his critics say he may be sacrificing efforts to counter Holocaust revisionism, especially by leaders who are trying to downplay their countries’ complicity with the Germans in World War II.

“In recent years, some European governments try to present, and even force, a historical picture which is very different than the one well known based on documentation and on historical research,” Havi Dreifuss, a historian of the Holocaust in Eastern Europe at Tel Aviv University, told JTA.

“We see those phenomena mainly, but not only, regarding the assistance of locals to Nazi Germany murderous acts. It is most disturbing when there is no correction or comment from the Israeli side especially when these distorted narratives are part of an attempt to shape the public sphere and the public discourse,” said Dreifuss. “When Israel does not clearly correct these historical distortions it is very concerning, because it is not only history that shapes the past but also the public debate.”

On Monday, with the announcement that the Visegrád Group’s next summit will be held in Jerusalem, Netanyahu felt Israel had much to celebrate.

An alliance of Hungary, the Czech Republic, Poland and Slovakia, the Visegrád Group represents the nationalist and conservative wing of the European Union. Gaining their support in the international arena should count as an uncontested diplomatic coup.

However, some in Israel see Netanyahu’s political triumph as deeply problematic.

In a scathing condemnation, Yair Lapid, head of the centrist Yesh Atid party, tweeted that the summit will feature a “prime minister who passed a law that humiliates the memory of Holocaust victims and a prime minister who publishes anti-Semitic content.”

“It is the loss of all national pride and causes us damage in the international arena,” Lapid continued. “The prime minister must overcome his passion for election photography and cancel it.”

The increasingly close relations between Jerusalem and countries such as Hungary and Poland have liberals here worried because both countries’ governments have taken steps to undermine independent institutions and the press. Both European countries are seen as rolling back the process of democratization begun after the fall of communism.

But the specter of World War II casts a distinct shadow in the Jewish state. According to a study released last week by researchers from Yale University and Grinnell College, Holocaust revisionism has been on the rise in Europe. Some of the worst offenders were found in Poland and Hungary.

“Holocaust remembrance is under clear threat in Poland,” according to the report.

Netanyahu has taken notice. Responding to the public outcry in Israel and around the world over Poland’s “Holocaust law,” Netanyahu condemned the legislation, stating that Israel had “no tolerance for distorting the truth, historical revisionism, or Holocaust denial.”

However, as relations between Warsaw and Jerusalem hit a new low, Netanyahu became conciliator, releasing a joint statement with Morawiecki claiming that “that structures of the Polish Underground State supervised by the Polish Government-in-Exile created a mechanism of systematic help and support to Jewish people.”

Netanyahu has also come under fire for praising Orban for “preserving the memory of the past” despite the Hungarian prime minister’s public praise for wartime leader and Nazi ally Miklós Horthy, as well as the anti-Soros campaign. 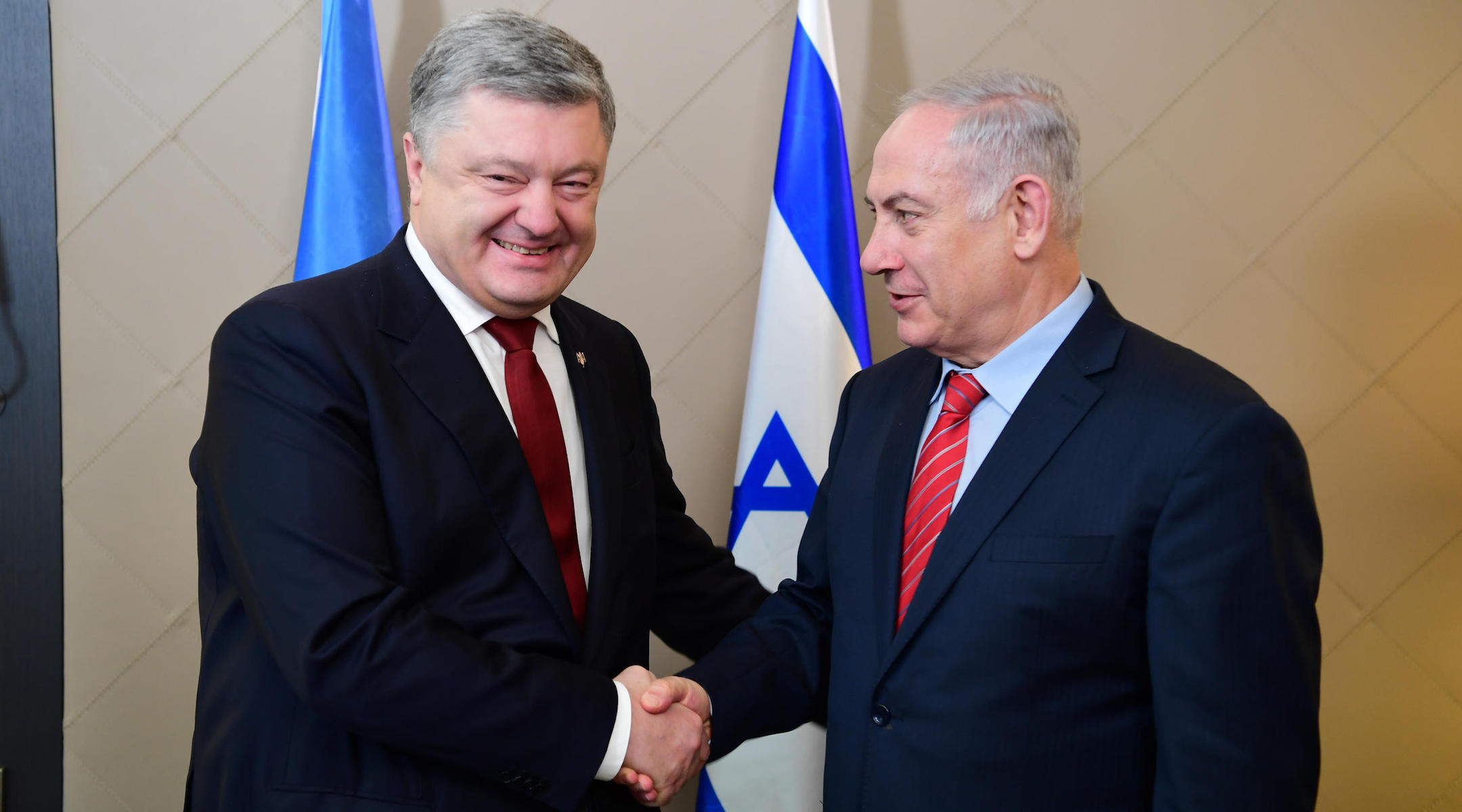 Jerusalem has also ignored Holocaust distortion among non-EU allies on the continent, critics charge. Last week Ukrainian President Petro Poroshenko visited Jerusalem for the signing of a free trade agreement that had been in the works for several years.

The visit was an “absolute disaster” from the perspective of “dealing with Holocaust distortion and the fight against anti-Semitism,” claimed Efraim Zuroff of the Simon Wiesenthal Center. He said Netanyahu failed to publicly address Kiev’s official policy of rehabilitating local Nazi collaborators who had participated in the murder of Jews and Poles.

“I have no reason to believe that [this week’s] visit of the Lithuanian Prime Minister [Saulius Skvernelis] will be any different,” he continued. “As many people recall, when Netanyahu visited Lithuania in the fall, not only did he not criticize the Lithuanian government for its efforts to distort the Holocaust but he actually praised them for the manner in which they commemorated the Shoah. This is the problem. Israel and Netanyahu have knowingly abandoned their role as the defenders of the memory of the Holocaust.”

Israel’s failure to protest the passage of a 2015 bill honoring Ukrainian nationalists who murdered Jews was disappointing, said Eduard Dolinsky, the Kiev-based director of the Ukrainian Jewish Committee, an advocacy group. While it was a “big deal” when Israeli President Reuven Rivlin spoke out against honoring collaborators during a speech a year and a half later, Dolinsky believed that more should have been done.

“Israel should react stronger when the Holocaust is distorted and Nazi collaborators are glorified,” he said. “We expected that Israel would react. The matter is that Ukrainian government agencies and organizations involved in the process of glorification are closely watching what Israel would say. Therefore when Israel is silent they can go forward and ignore the Jewish community statements. I don’t want to criticize Israel, but her reaction could be stronger and sharper.”

Yehuda Bauer, one of Israel’s most respected Holocaust scholars, told JTA that “the distortion of Holocaust memory and the facts of the Holocaust by official authorities in Poland, Hungary, Ukraine and Lithuania in different forms has been accepted by the the Israeli government.”

Deborah Lipstadt, a Holocaust scholar at Atlanta’s Emory University and the author of a memoir about her own fight against Holocaust denial, is also wary of the new alliances.

“I think that, possibly for reasons of realpolitik, Israel has been a bit malleable when it comes to overtly anti-Semitic actions by countries such as Hungary [and] Poland,” she said. “These countries may vote in favor of Israel in international bodies, but I think it is a dangerous game to give them a pass on their anti-Semitic actions.”

Closer to home, a Knesset member who chairs a lobby on anti-Semitism in the former Soviet Union says it is incredibly difficult to get the government to speak out on such issues.

“I’ve sent dozens of letters that were addressed to heads of embassies and heads of states and not even once did the Foreign Ministry became active and join me in [my] condemnation,” said Ksenia Svetlova of the opposition Zionist Union. “I would hate to think that anti-Semitism and Holocaust and historical memory became nothing more than cheap change in the political game but it seems to me that it is increasingly becoming so.”

“A constant Israeli policy”
Such sentiments are far from universal, however. Some analysts insist that the issue is more nuanced than Netanyahu’s detractors believe.

“The state of Israel, like every other state, often has little choice but to establish ties with countries with less-than-perfect human rights records such as Egypt, which allows an uncomfortable amount of anti-Semitism in semi-government-controlled media,” said Tom Gross, a journalist and Mideast analyst.

“I would say that from what I know of Netanyahu, he is not insensitive and cares greatly about anti-Semitism and the Holocaust and is fully aware of the minefield he is in,” added Gross. “The government of Israel has to balance all kinds of considerations,” one of the primary ones being its own security.

However, said Gross, that does not mean that issues of commemoration should necessarily fall by the wayside and in the case of a country like Ukraine “the Netanyahu government should have done more.”

Israel’s Foreign Ministry disagreed. A spokesman told  JTA that “broadly speaking, and this is Israel’s policy, we will not relinquish historical memory in favor of other interests. This has always been our position.”

This position was echoed by Joel Lion, Israel’s recently appointed ambassador to Ukraine. Notably, he has been significantly more outspoken on revisionism than most other officials on this issue.

Dore Gold, a former director-general of the Ministry of Foreign Affairs under Netanyahu and the current President of the Jerusalem Center for Public Affairs, also defended the government.

“My view is that the memory of the Holocaust is a constant Israeli policy, whether it’s foreign or educational policy, and it’s not an issue we can compromise on in any way, shape or form, but whether the accusations made about Israel somehow sacrificing that memory for purposes of realpolitik are highly questionable,” Gold told JTA.

But even some on the moderate right who support realpolitik in foreign policy have expressed reservations about Netanyahu’s approach.

While “one does not shy away from necessary things,” politics cannot be “totally devoid of moral values,” said Dan Meridor, who served as Netanyahu’s Deputy Prime Minister between 2009-2013. He currently heads the Israel Council on Foreign Relations, a Jerusalem think tank affiliated with the World Jewish Congress.

In extreme cases where anti-Semitism is perceived, such as Orban’s anti-Soros campaigns, “you should say something about it.”