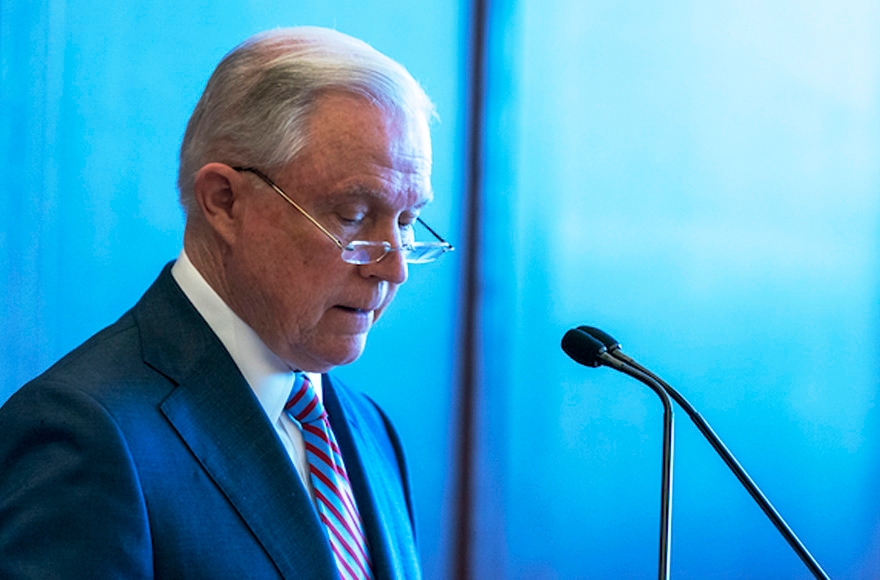 (JTA) — Let me start by stating what should be obvious: Holocaust comparisons are lazy and more often than not hysterical. They diminish Nazism and genocide by making them synonyms for “very bad things.” You may regard the Trump administration’s zero-tolerance stance at the border, and its policy of separating parents and children, as inhumane and un-American. But if you think that’s Nazism, you don’t know Nazism.

But wow, how weird was Attorney General Jeff Sessions’ reply when Laura Ingraham asked him about the Nazi comparisons?

Here’s the June 18 exchange on Fox News’ “The Ingraham Angle”:

Ingraham: This is how your opponents, [Attorney] General Sessions, are demagoguing this issue. … Nazi Germany, concentration camps, human rights violations. Laura Bush has weighed in. Michelle Obama, Rosalynn Carter, you’ve got all of the first ladies, going back to Eleanor Roosevelt, she’s apparently weighed in as well. General Sessions, what’s going on here?

Sessions: Well, it’s a real exaggeration, of course. In Nazi Germany, they were keeping the Jews from leaving the country. But this is a serious matter. We need to think it through, be rational and thoughtful about it. We want to allow asylum for people who qualify for it, but people who want economic migration for their personal financial benefit, and what they think is their families’ benefit, is not a basis for a claim of asylum. But they can make that claim, we will process it, and I will review the situation and make a decision.

Let’s start with the word “exaggeration.” If a wife accuses her husband of adultery, and he replies “You’re exaggerating,” I’m pretty sure this marriage can’t be saved. “Exaggeration” suggests you are overdoing it, but there’s, you know, a continuum.

It gets weirder when you finish Sessions’ thought for him after he says “they were keeping [people] from leaving the country.” As opposed to what: “We are trying to keep them out”? That’s the difference between the Nuremberg Laws and our immigration policy? You can almost hear the thought process as, “Yes, we both had problems with alien populations. But ours is ethically defensible because they aren’t our citizens.” It’s telling that it’s the first distinction he can think of.

If somebody compared something I did to the Nazis, I hope in outrage I would jump right to the heart of Nazism: “The Nazis’ aim was to harness all the power of the state to industrial-scale murder and the destruction of an entire race. Unless you are actually talking about genocide, it’s demagoguery to compare any policy with which you disagree to Nazism.”

I hope I wouldn’t narrowly parse what I and the Nazis do and don’t have in common.

I don’t believe Sessions is soft on Nazism. The problem here is defending what more and more people on both sides of the aisle insist is an indefensible policy. And it’s what happens when some members of your own administration insist there is no such policy, others insist it is a necessary policy, others — namely Sessions — defend it on biblical grounds and still others — namely, the president — say they hate the policy but lie about their own ability to rescind it. Confused and indefensible policy leads to confused and indefensible thinking and rhetoric.

It also leads opponents to overdo it. A detention center or shelter is not a concentration camp, as upsetting as it is to see children and adults separated into facilities that include chain-link holding areas. Wikipedia has even included the U.S. Customs and Border Protection facilities on a list of concentration and internment camps. But these centers are troubling and cruel on their own terms. Putting them on the same list as Auschwitz and Sachsenhausen only diverts the conversation — and actually gives the purveyors and defenders of a bad policy, a la Ingraham, the opportunity to claim hurt and insult.

Holocaust analogies also force Jews to become language police over a policy most seem to abhor. Nearly 30 Jewish groups have signed a letter asking the government to suspend its family separation policy, including representatives of all the major Jewish denominations. As author Ijeoma Oluo put it so succinctly on Twitter, “Hey, if Jewish people say that they are uncomfortable with the use of ‘concentration camps’ to describe the horrific treatment of undocumented immigrants bc it feels like an exploitation of their trauma from genocide, IT’S NOT BECAUSE THEY DON’T CARE ABOUT WHAT’S HAPPENING.”

Responsible Jewish groups guard against loose Holocaust analogies not because they want to claim all the world’s suffering for themselves, but because they believe distinctions matter. And they fear that if you can prove that something isn’t Nazism, then hey, it might not be all bad. But as Oluo continues, “We don’t actually have to invoke the deep trauma of Jewish people in order to point out that separating families is wrong and putting people in cages is wrong. It is outrageous on its own. It should be enough to force us into action on its own.”

So Jeff Sessions is right: “[T]his is a serious matter. We need to think it through, be rational and thoughtful about it.” Being rational is putting our immigration policy in proper historical and political perspective. And being serious is listening to your critics and taking responsibility for the actions you and your colleagues have ordered and defended.