History shows that epidemics can carry dangerous side effects for Jews: deadly anti-Semitism

NEW YORK (JTA) — Over the course of our millennial history, Jews have had many encounters with contagious diseases. Often we’re blamed for them.

Maybe I’m paranoid, but I can’t help feel uneasy with the amount of attention the New York Jewish community is receiving because of the first confirmed cases of the coronavirus. (We are hardly first: Asians around the globe already faced prejudice because of the epidemic’s origins in Wuhan, China.) The ominous flow charts demonstrating the spread of the contagion, featuring silhouettes of unnamed individuals connected with Jewish schools and synagogues, makes me think of the “hidden hand” propaganda of the 1940s — and also the long, horrible history of anti-Semitic charges that Jews spread disease. I’m sure it’s nothing — I’m just starting to feel a little queasy, that’s all.

Given Jewish history, it’s vital to avoid anti-Semitic tropes about the spread of disease — and sobering to know the consequences when we don’t. 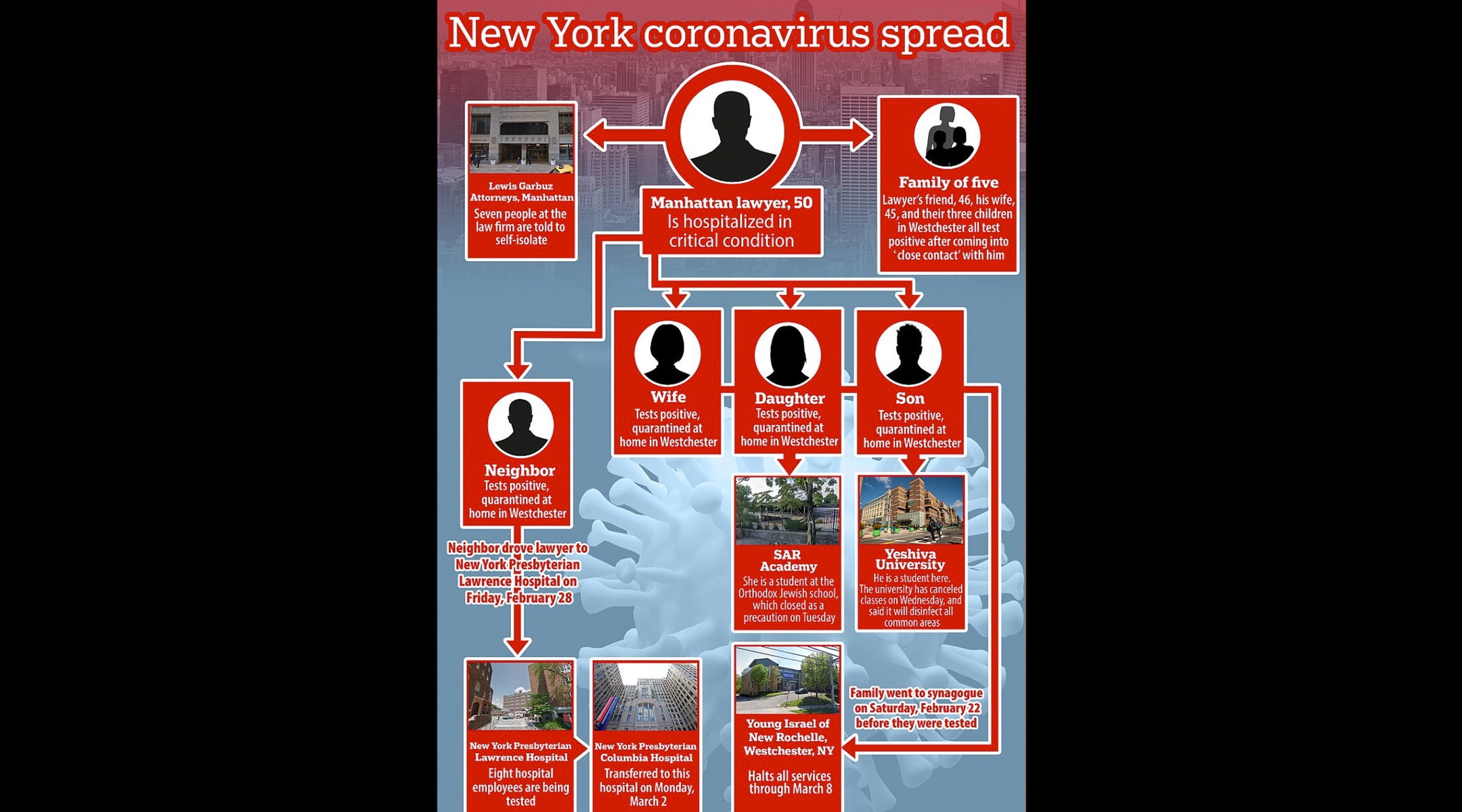 An ominous flow chart shows how the coronavirus has affected New York Jewish institutions. (Screenshot from the Daily Mail)

Manetho, an Egyptian priest who lived 2,300 years ago, was probably the first to level this charge against Jews. He retold the Exodus with rather creative flair, arguing that the Jews weren’t redeemed from slavery with signs and wonders — they were, he claimed, expelled by the Egyptians because they were a source of contagion. Not unlike the Nazis, who justified the walling off of the ghettos as a prophylactic against the spread of typhus, Manetho sought to associate Jews with the silent spread of the dreaded plague, as invisible as it is unstoppable.

Manetho’s ethnocentric, sour-grapes reading of Jewish history might have had some credibility if there were any reason to assume that Jews were less susceptible to disease than non-Jews. This widely held myth is especially associated with stories of the Black Death, the horrific plague that ravaged Europe from 1348 to 1351.

I’ve read all kinds of wishful thinking on this topic: Some hold that Jews dodged the plague because they were inherently cleaner (they do wash their hands sans soap before eating bread, but bathing in the 14th century was at most a weekly affair). Also, since there’s an assumed historical tradition for Jews not keeping dogs as pets, the Jewish cats kept the rats away, along with their plague-bearing fleas. These are wonderful, heartwarming theories. It’s just too bad there’s no historical evidence to support them.

If anything, Jews tended to suffer from plagues at a greater rate than the population at large, particularly because they were far more urbanized than the peasantry (plague is part of what some scholars call the “urban health penalty”) and had a much higher level of contact with potentially infected individuals. In many cities they lived in extremely cramped quarters, hemmed in by residency restrictions, often with limited sources of barely potable water.

But that hardly stopped anyone from blaming the Jews for the Black Death, notorious for its fatality rate approaching 50% of the infected. On the contrary, unhinged conspiracy theories circulated widely, building on centuries-old charges that Jews were poisoning wells out of a deep-seated misanthropy.

The intellectual roots of the slander of poisoning stretched back centuries, given the Jews’ unusually prominent role as medical professionals: a risky business, especially whenever one’s patient expired. As late as 1610, the medical school in Vienna had no compunction making the bizarre assertion that Jewish law required physicians to poison one patient in 10.

The heroic Jewish historian Joshua Trachtenberg (heroic because he published a stunning work on the history of anti-Semitism in 1943) identified the trope of the Jewish doctor/sorcerer/poisoner in several works of early modern literature, including this bit of dark dialogue from John Malston’s “Malcontent” (1604):

Historian Iris Ritzmann has demonstrated, contrary to long-held opinion, that the wide-scale persecution of Jews cannot solely be understood as a reaction to the plague-borne social hysteria. Its roots clearly lie a few decades earlier in the popular association of Jews with unlikely partners in crime: lepers, perhaps the only people more despised than the Jews themselves.

Already in the 1320s, lepers were apprehended for suspected well poisonings, and after a judicious application of torture, “confessions” were provided. Complete, detailed recipes of poisons were listed, including such rare toxins as human blood and urine, spiders, snakes’ heads, toads’ legs, women’s hair, and of course communion wafers pilfered from the Church.

With the beginnings of the Black Death, Jews also were seized and tortured, although the confessions often demanded a wider net of culpability: In one 1348 trial held near Lake Geneva, Jews were forced to assert that the Torah requires every Jewish person over the age of 7 to participate in the poisoning of wells — the absurd claim forming the flimsy justification for the genocidal wave of persecutions that followed.

According to historian Hillel Ben-Sasson, some 300 Jewish communities were destroyed in the mass hysteria associated with the plague. Much of the agitation came from the local population: Church officials often issued appeals on behalf of the Jews, including Pope Clement VI, and Emperor Charles IV and Peter IV of Aragon urged an end to the violence, to no avail.

Jewish communities charged with well-poisoning were typically taken out to their own graveyards, ordered to build their own funeral pyres, and set alight. Aware of their ultimate fate, the Jews of Nordhausen dressed themselves in their Sabbath finery before proceeding to their fiery deaths.

The horrific massacres proceeded apace until 1351, undoubtedly accelerated by the practice of distributing the confiscated property of the murdered Jews among the villagers who participated in the public burnings. In 1349, the municipality of Brandenburg actually indemnified the pogromists in advance by warning the Jews that they would be held to blame if plague broke out in the city.

Samuel Cohn, who has written extensively on the relationship of plague and anti-Semitic violence, noted that authorities often returned to more “rational” explanations of the plague only after the Jews were dispatched. The Burgess of Narbonne, for example, issued the final word by pinning the plague deaths not on the Jews but on “the effect of the planets.”

But as late as 1401, a half-century after the Black Death, Jews in Freiburg were accused of “poisoning the air.”

So yeah. In terms of Jewish history, it’s not always about the virus itself. It’s what might happen after the virus.

is a specialist in Jewish history and thought who currently serves as a dean of Touro College in Brooklyn, New York.
The views and opinions expressed in this article are those of the author and do not necessarily reflect the views of JTA or its parent company, 70 Faces Media.