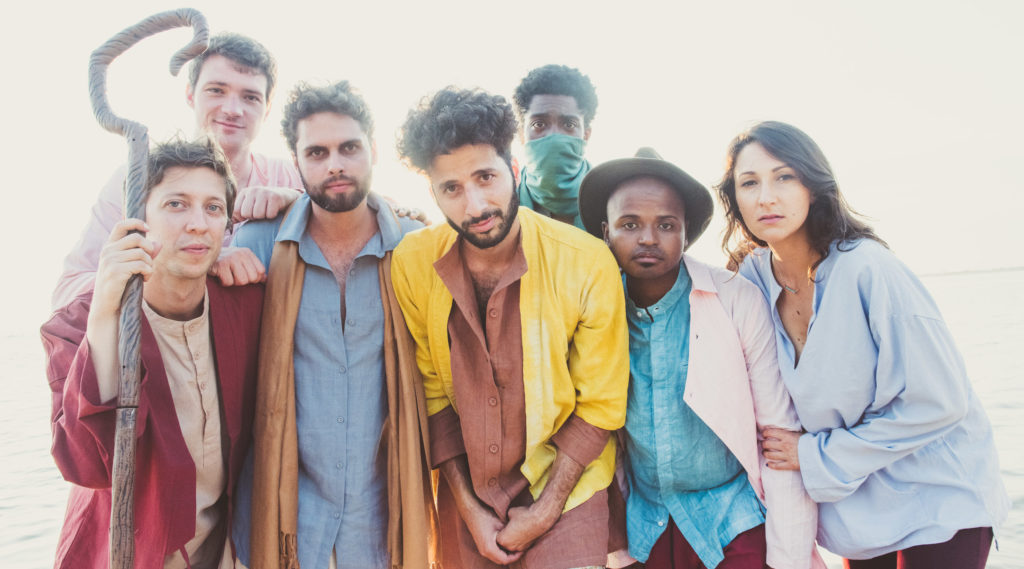 (JTA) — Sammy Miller and his girlfriend Misha grew up in vastly different cultures: Sammy was raised Jewish in suburban Los Angeles, while Misha was raised Muslim in Karachi, Pakistan, moving to the United States when she was 12.

Miller also happens to be a musician — he leads Sammy Miller and the Congregation, an up-and-coming poppy jazz group that sounds like a cross between the Preservation Hall Jazz Band and the Ben Folds Five.

Now he’s written a humorous song, titled “Date a Jew,” about the pressures he and his girlfriend felt during the early days of their relationship.

The “Date a Jew” music video, which features stunning shadow puppetry by the Hit the Lights! Theater Co., is premiering here.

“There was one thing in this world my momma said, you gotta date a Jew,” Sammy sings at the start of the song.

A few lines later he sings that Misha “learned at the mosque” not to date Jews.

Fortunately, in real life, the pair got past the early hurdles. Miller approached Misha when he was 16, at a Model U.N. conference for high school students.

He wasn’t the type to make a bold move — even now at 28 he speaks softly and chooses his phrases deliberately — but he walked up to her and told her he thought she was pretty.

“She didn’t say anything because it was kind of a weird thing to say,” Miller said.

So nothing came of that at first. But about 10 years later, Misha showed up at one of Sammy’s concerts, in Chicago. The rest is romantic history.

These days they share each other’s traditions — Sammy recalls, for example, how Misha sat with him through his grandfather’s shiva, and how he then learned about Islam’s equivalent of the Jewish Mourner’s Kaddish prayer.

The philosophy of openness preached by the song dovetails perfectly with Miller’s musical ethos as well: making jazz fun and accessible again to all. Miller, a Juilliard graduate, believes that the contemporary jazz world has become too serious and insular, which starkly contrasts with some of the genre’s icons, like the late Louis Armstrong and Duke Ellington, who were storytellers.

“I’m trying to create material that is very much of our moment, which is my experience. … We’re not dressing up in bow ties and pretending like it’s 1927,” he said. “We want to create space for people to be themselves, and I feel like Misha did that for me and I did that for her.”

Miller isn’t very religious these days, but just about everything about his band’s aesthetic has a Jewish vibe, from the congregation in the name to the album title’s Exodus reference to the Moses-like staff pictured in some promotional photos (like the one attached to this article).

“[‘Leaving Egypt’] is us leaving the conventions of our jazz world,” Miller said. “We’re leaving what we knew for something unknown.”