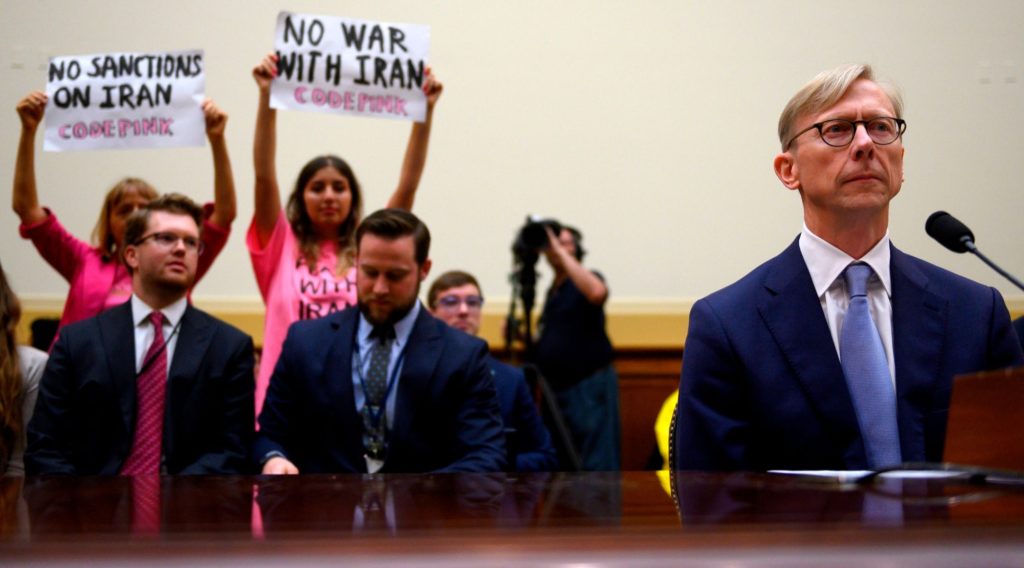 “We’re looking at Iran,” he said Tuesday when a reporter asked him what he had planned beyond sending another 1,000 U.S. troops to the area as tensions there appear to be escalating. “We have a lot of things going with Iran. We have — we’re very prepared for Iran. We’ll see what happens. Let me just say this: We are very prepared. Regardless of what goes, we are very, very prepared.”

Trump was short on details, which has unnerved Democratic members of Congress and presidential candidates, who have derided Trump on the campaign trail for an incoherent foreign policy that they say is escalating tensions.

“I hope Iran chooses a different path,” Sen. Elizabeth Warren, D-Mass., who is emerging as a frontrunner in her party’s presidential stakes, said Tuesday on Twitter. “But let’s be clear: Trump provoked this crisis. He has no strategy to contain it, he’s burned through our friends and allies, and now he’s doubling down on military force. We can’t afford another forever war.”

Republicans and Trump administration officials say their critics’ concerns are overwrought. They say that everything is going exactly as planned: Iran is reeling from increased sanctions and other forms of pressure, and is lashing out before it realizes the error of its ways.

“This administration has implemented an unprecedented pressure campaign with two primary objectives: first to deprive the Iranian regime of the money it needs to support its destabilizing activities, second to bring Iran back to the negotiating table to conclude a comprehensive and enduring deal,” Brian Hook, the top State Department official handling the Iran brief, said at congressional hearing Wednesday.

The following day, Iran’s Revolutionary Guard said it shot down an “intruding American spy drone” after it entered into the country’s territory, CNN reported, citing the state-run Press TV. A U.S. official confirmed to CNN that a drone had been shot down, but said the incident occurred in international airspace over the Strait of Hormuz, not in Iranian territory. It is not clear when the drone was shot down.

In recent days, attackers damaged two oil tankers in the Strait of Hormuz, which the Trump administration says is the work of Iran. Iran said it would break the limits imposed on its stockpile of enriched uranium imposed by the 2015 Iran deal. Trump committed the troops to the region.

Rep. Ted Deutch, D-Fla., an Iran hawk within his party who opposed the 2015 Iran nuclear deal, on Wednesday convened the oversight hearing by the Middle East subcommittee he chairs to address Trump’s Iran policy.

“I question its coherence, its impact on our international leadership, its effectiveness and, at times, its recklessness,” Deutch said.

Among the concerns Deutch outlined:

Here’s how the Trump administration and defenders of its Iran policy are explaining what’s going on.

Hook told Deutch at the hearing that ramped-up sanctions and the threat of U.S. engagement were weakening Iran and deterring it from any serious actions.

Rep. Michael McCaul, R-Texas, the ranking Republican on the Foreign Affairs Committee, said at the same hearing that Trump’s reimposition of sanctions had impoverished the Iranian regime.

“In my view, the sanctions are working,” McCaul said. “It is crippling Iran, it is crippling their economy, they are cash-starved and Hezbollah,” Iran’s terrorist ally in Lebanon, “is now begging for cash. To me, these are all positive signs.”

Rep. Joe Wilson, R-S.C., also on the Foreign Affairs Committee, said what the Trump administration was doing was no different than the sanctions and pressure that President Barack Obama used in the early part of this decade to get Iran to the negotiating table.

“It was the international sanctions regime against Iran that finally brought the Iranian regime to the table,” Wilson said at the hearing. “We must restore deterrence against Iran.”

No one wants war, guys …

“Oh goodness, President Trump has said very clearly he doesn’t want to go to war,” Pompeo said when host Margaret Brennan asked if a U.S. military strike was on the horizon.

The endgame is peace, Hook told Deutch at the hearing.

“President Trump and Secretary Pompeo have expressed very clearly our willingness to negotiate with Iran,” Hook said. “When the time is right, no one should be uncertain about our desire for peace or our readiness to normalize relations.”

… but we need war’s threat to keep Iran off kilter.

“President Trump has done everything he can to avoid war,” Pompeo told Chris Wallace on “Fox News Sunday.” “We don’t want war. We’ve done what we can to deter this. The Iranians should understand very clearly that we will continue to take actions that deter Iran from engaging in this kind of behavior.”

Democrats raise the specter of another long-term, open-ended and destructive war, of the kind President George W. Bush launched in 2003 with Iraq — the “forever war” Warren mentioned.

Eli Lake, a Bloomberg News columnist, said invoking Iraq misses the mark. There is no sign that Trump is planning the scale of invasion that Bush led in 2003.

The better comparison, Lake said, was what was once known as “cruise missile” diplomacy — targeted attacks to send a message, not to launch a war. Lake said he had heard from Trump officials that one option under consideration was limited attacks on Iranian naval facilities.

“There was a lot of criticism of President Bill Clinton’s decision to strike targets in Sudan and Afghanistan in response to al-Qaida’s bombing of two U.S. embassies in Africa,” Lake wrote. “But there was no credible argument then that the attacks were a pretext for a U.S. invasion, and there isn’t one now that limited strikes against Iranian naval facilities will lead to a ground war.”

A repeated theme in explanations of Trump’s Iran policy is that he is getting around to dealing with a regime that since its 1979 revolution has waged a nonstop war on U.S. and allied interests through terrorist attacks, regional adventurism and pokes against U.S. forces,

“I think you have to put it in the context of 40 years of behavior inside the Islamic Republic of Iran,” Pompeo said on “Face the Nation.” “This is consistent with how they have behaved previously. They did it when they were in the JCPOA [the 2015 nuclear deal]: They built their missile program; we relieved sanctions; they took American sailors hostage. This is a regime that has caused much trouble around the world.”