Haredim sue to stop police use of skunk spray 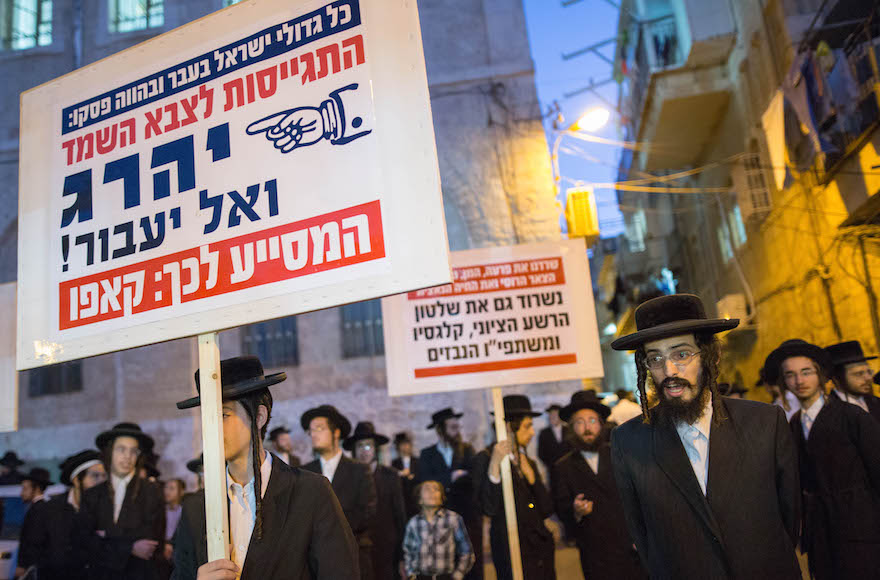 JERUSALEM (JTA) — Several Haredi residents of Jerusalem have petitioned the High Court of Justice to stop the police’s use “skunk spray,” a foul-smelling chemical compound initially developed for use against Palestinian rioters. Last year the police started using the spray against fervently Orthodox rioters protesting the draft.

According to Haredi news website Behadrei Haredim, the four haredi Orthodox plaintiffs have claimed that the use of skunk spray in dense urban neighborhoods constitutes collective punishment and a “grave violation of human rights.” Two of them complained that their shops suffered thousands of shekels of damage due to the spray when it was used against nearby demonstrators. A third complained of police shooting the spray onto his balcony as he watched a protest. He said that the spray entered his home, causing damage and injuring one of his grandchildren.

Members of the haredi Orthodox Jerusalem Faction, which was founded by the late Rabbi Shmuel Auerbach, regularly hold protests against the IDF at which they block streets and clash with police. Nearly 50 protesters were arrested following a protest in Jerusalem earlier this month during which demonstrators attempted to block a major street.

“No kind of rain – they spray it on us in direct trajectory, on purpose,” one yeshiva student said in describing the skunk spray to Haaretz last year. “Whoever it hits is flung a few meters back and falls down. I took it directly in the back a few times. I’m not even talking about the horrible smell, which is indescribable, but there’s no doubt that they are trying to injure you deliberately.”

A video posted to YouTube late last year shows a bystander being hit by skunk spray and thrown several feet during a protest down the street from the Jerusalem Central Bus Station.