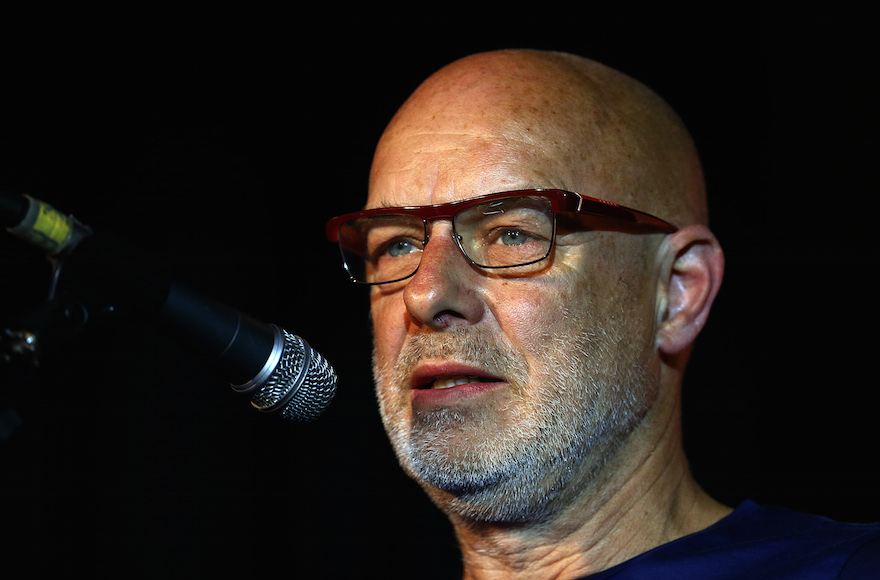 (JTA) — Organizers of a music festival in Düsseldorf, Germany, withdrew their invitation to the composer and singer Brian Eno over his longtime involvement in attempts to boycott Israel.

Eno was slated to appear at the Electricity Conference festival in October, but last week he signed a letter urging a boycott of the Eurovision Song Contest that will be held next year in Israel, the Jewish Chronicle of London reported Thursday.

Festival organizer Rüdiger Esch told the Westdeutsche Zeitung that it “was the only right decision” to disinvite Eno because “we don’t want to invite anyone who supports activities against the State of Israel, even if you cannot agree with the current settlement policy.”

Esch said he had visited Israel for five days and that personal experience had made him more aware of the Boycott, Divestment and Sanctions campaign, or BDS, directed at the country.

Organizers said Eno’s appearance had been planned since last November but his support for BDS had not been known to them. Eno has joined several BDS petitions in recent years.

He had been due to open an exhibit of his video paintings and lead a workshop at a local college, the newspaper reported. It also said that “a large sponsor of the festival” terminated its support because of Eno’s pro-BDS activity.

Directors Ken Loach and Mike Leigh and the musician Roger Waters were among the high profile figures who joined Eno in calling for a boycott of next year’s Eurovision. The signatories said they supported “the heartfelt appeal from Palestinian artists to boycott” the event “until Palestinians can enjoy freedom, justice and equal rights.”

Israel won the right to host the contest after Netta Barzilai’s victory in this year’s edition of the song contest.