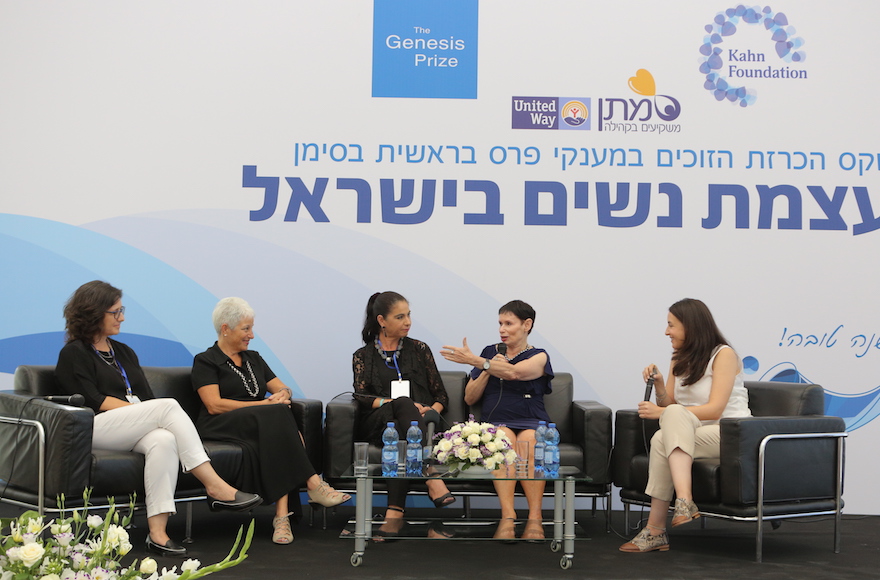 A panel at a Genesis Prize women’s empowerment event including, from left to right: Daphna Hacker, head of Gender Studies at Tel Aviv University; Amanda Weiss, CEO and founder of the Bible Lands Museum; Hamutal Guri, CEO of the Dafna Foundation; Aliza Shenhar, ex-rector of Haifa University and ex-ambassador of Israel in Moscow; and journalist Lucy Aharish. (Courtesy of the Genesis Prize Foundation)

TEL AVIV (JTA) — Hundreds of women, representing dozens of organizations, sat in the auditorium in this city’s Yitzhak Rabin Center listening to speaker after speaker stand and deliver paeans to feminism. In response, the women clapped raucously.

Their enthusiasm was understandable. Representing some 37 organizations dedicated to the advancement of women, they were celebrating their shares of a $1 million grant from the Genesis Prize Foundation and the Kahn Foundation.

Chosen by the Genesis Prize’s 2018 laureate, actress Natalie Portman, the theme of “advancing women’s equality” is shining a spotlight on the gains here in women’s empowerment as well as the challenges still facing women in all sectors.

The announcement of the grantees on Tuesday morning acknowledged both sides of the issue.

In a recorded message, U.S. Supreme Court Justice Ruth Bader Ginsburg, who recently received a lifetime achievement award from the Genesis Prize Foundation, said she was “pleased and proud of contributions that will be made to organizations that are doing great things to improve the lives of women and girls, and particularly of bringing together communities – Arab Israelis, Jews, Bedouins – all Israeli women. I think women can contribute a great deal to achieving, some day, a lasting peace.”

The organizations chosen focused variously on Jewish women; the Arab, Bedouin and Druze sectors; and the LGBT community.

Portman, citing her political differences with Israeli Prime Minister Benjamin Netanyahu, chose not to attend a ceremony earlier this year awarding the Genesis Prize, a partnership between the Israeli government and private sector that honors individuals for their commitment to Jewish values, heritage and Israel.

Following the Portman decision, Genesis said it remained committed to donating the $1 million in prize money to the cause she had chosen. The foundation received 220 applications from Israeli NGOs; another $2 million will be given away in the United States in a matching program offered by philanthropist Morris Kahn.

The full list of Israeli grantees ranged from Ajeec Nisped, which guides Arab high school graduates toward university and the workforce, to Katef Le Katef, a support program for single mothers, to She Codes, The Organization for Gender Equality in Tech. “Grants announced today cover all geographies, all social strata, and all ethnic and religious groups in Israel, including Jews, Arabs, Christians, Druze and Bedouin,” Sana Britavsky, deputy CEO of the Genesis Prize Foundation, said in a statement. “This is a systemic, across-the-board effort to support the women’s movement in Israel over the next two years.”

The director of one of the grantees, the Van Leer Jerusalem Institute’s Center for the Advancement of Women in the Public Sphere, said that while superficially things appear to have become better for women in Israel, a closer look reveals persistent inequalities. Hadass Ben Eliyahu said gender inequality has persisted at similar levels since the early 2000s, when her center launched its Gender Index measuring 74 indicators in 12 areas of Israeli life.

The center aims to fill in gaps in gender research, such as comparing women’s salaries with men’s over time. Without such data, Ben Eliyahu said, there was a lack of context in women’s studies research and a subsequent lack of reliable hard data for use by activists and policymakers.

“It’s important because if you just see the situation of women, you will see great improvements over the years,” she told JTA.

However, despite advances, women have yet to catch up with men — and in the case of the salary gap have actually fallen behind over the past two years.

While the rate of women earning university degrees has increased dramatically (“women are now more educated than men in Israel,” Ben Eliyahu said), this has not translated into greater equality in the workplace.

“Look at the Cabinet,” she said, referring to the government’s circle of ministers. “There will never be more than four or five women ministers.”

Other indicators have been more positive.

According to a 2015 Treasury report, Israeli women have entered the workforce at a faster rate than their counterparts in the Organization for Economic Cooperation and Development. At the same time, the average monthly salary for an Israeli woman was 7,666 shekels ($2,100) versus 11,219 ($3,100) for men. Some 62,880 women were in senior managerial positions versus 100,835 men, according to the Gender Index, and men were five times more likely than women to be CEOs.

This is something that another of the grantees is trying to change. Jasmine trains women to serve as members of corporate, public and NGO boards. Only 21-23 percent of members of corporate boards in Israel are women, according to Smadar Tzalalichin-Sabo, who volunteers at the organization.

“Only 4 percent of small businesses are owned by women,” she said, “and in the Arab sector it’s even smaller.”

While women have yet to reach full equality in the Cabinet, when it comes to national politics as a whole, “you can definitely see an improvement,” said Chen Friedberg of the Israel Democracy Institute. Female representation in the Knesset has increased dramatically, from 12 woman legislators in the late 1980s to more than 30 today.

“It’s not 50 percent yet, but it’s a nice improvement,” she said, adding that while the haredi Orthodox parties still ban females from their electoral lists, many other parties are now or have been headed by women.

One of the most discussed examples of gender inequality in Israel is the Chief Rabbinate’s control over marriage and divorce issues. Women are unable to unilaterally divorce their husbands and require a writ of divorce known as a get. Women are also prohibited from serving on rabbinical courts, creating a power imbalance.

Genesis awarded grants to a number of groups working in the haredi sector, including Kemach (Movilot) and Mati, which support haredi (and in the case of Meti, Arab) women in the workplace; We Power, offering advocacy training for underprivileged Orthodox and Arab women; and Women and Their Bodies, which educates Arab and Orthodox women on sexuality, reproductive health and reproductive rights.

“We have tremendous civil rights and women are achieving top positions, but individually there are areas where a woman does not have control over her life,” said Shoshanna Keats Jaskoll, co-founder of Chochmat Nashim, an organization that “combats extremism and the erasing of women in Orthodox Jewish society.” (It was not a grantee.) “You have a situation where a woman can be a Supreme Court justice but can’t get a divorce. It’s a big dichotomy.”

However, she said, while it is happening slowly, change is occurring. While women cannot sit on religious courts, they have started appearing on the committees that appoint rabbinical judges and to appear in religious courts as advocates.

“It’s a big change, but it’s not enough yet,” Keats Jaskoll said.

Overall, Ben Eliyahu cautioned that the situation is too complicated to be measured by one or even several yardsticks.

“There are different kinds of indicators that can show improvement, but the overall picture is very stable and that is the [index’s] strongest finding,” she said.

“People think that everything is much better now and we don’t need all these feminists, but when we look at the hard data it’s not true. The gap persists and remains stable.”