Gaza escalation holds both promise and perils for Netanyahu 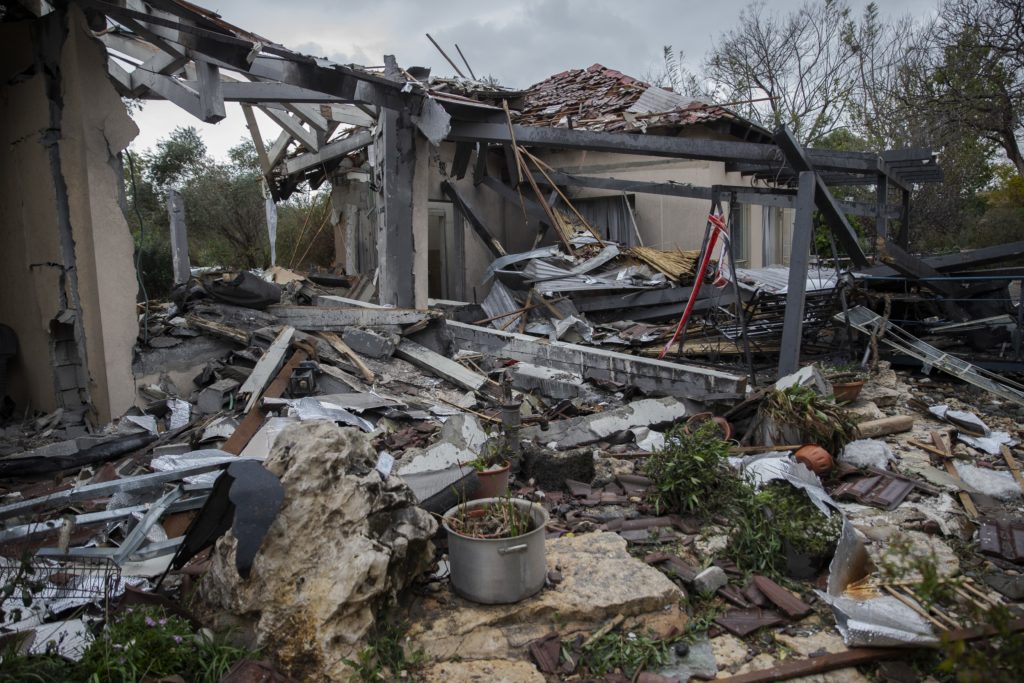 JERUSALEM (JTA) — Benjamin Netanyahu’s week had been carefully scripted: Less than one month away from Israeli elections, the prime minister was traveling to Washington, D.C., to meet with President Donald Trump. A friendly photo op would become even friendlier when Trump announced that he wanted to recognize Israeli sovereignty over the Golan Heights.

From there Netanyahu was going to speak to the annual conference of the American Israel Public Affairs Committee, reminding viewers back home that he is the essential man in shepherding the vital U.S.-Israel relationship.

And then the script changed.

By Tuesday, troops were massed along the Gaza border following an unexpected escalation that saw dozens of Hamas rockets rain down on Israeli towns, including one that destroyed a home near Netanya and injured seven.

And while a tense calm has descended on the region, Israeli news outlets have cited a senior official close to Netanyahu as saying that “there was no agreement over a cease-fire” and that the conflict was “not over.”

Some political pundits mused that the prime minister may have welcomed a limited conflict with the Palestinians as a way of shoring up his security credentials in a tough re-election race. His main rivals, the centrist Blue and White alliance, include three former IDF chiefs of staff among its leaders: Benny Gantz, Moshe Yaalon and Gabi Ashkenazi.

Netanyahu has long positioned himself as the only leader who can provide Israel with the security its citizens so desperately crave. A recent survey of more than 1,000 Hebrew and Arabic speakers found that security was the No. 1 concern among Israelis over employment, education and corruption. (Former Netanyahu staffer Mitchell Barak conducted the poll on behalf of the Konrad Adenauer Stiftung.)

Netanyahu has largely succeeded in turning this fact to his political advantage. Even the recent announcement that the country’s attorney general plans on indicting Netanyahu for corruption has not had the effect many of his detractors have wished. A Channel 12 poll released Sunday showed that even though Blue and White leads his Likud party by several seats, it will likely be unable to muster enough partners to form a ruling coalition in the 120-seat Knesset.

The prime minister “has only always run on the security ticket and the danger and fear ticket, and has convinced Israelis he’s the best and only guy when it comes to Israel’s security,” Barak, the pollster, told JTA. The “drama” of Netanyahu’s abrupt exit from Washington, D.C. — he flew home after meeting with Trump — in order to supervise Israel’s response showed Israelis that “he’s the commander in chief and in control and [they] can feel safe.”

Despite his security bona fides, however, risking an escalation would be an extreme political risk for Netanyahu, said Yohanan Plesner, president of the Israeli Democracy Institute.

Netanyahu, who has been prime minister for a decade, is widely considered responsible for the current security situation “and the public at large is not satisfied with the way this policy is going,” Plesner said. In other words, focusing on the audacity of Hamas may be the last thing he needs right now.

Figures released Monday by the Israeli Democracy Institute show that while 60 percent of the Israeli public thinks the Israel Defense Forces is dealing very well with maintaining security along the Gaza border, only 22 percent thought as highly of the government’s handling of the conflict. (Israelis trust the military more than civilian decision-makers as a rule.) And while nearly 70 percent of Israelis approved of Netanyahu’s decision not to launch a large-scale operation in Gaza in late 2018 in response to similar provocations, a Midgam poll conducted in November showed that nearly three-quarters of Israelis initially expressed disapproval of the prime minister’s handling of that escalation.

In other words, no one can predict how public attitudes will shift in times of conflict.

“There are a lot of different scenarios of how things can play out, and it’s very difficult to know where this can go,” political analyst and Jerusalem Post senior contributing editor Lahav Harkov said. “There’s no winning with Hamas. Nobody is satisfied at the end of one of these rounds of violence. I keep seeing these foreign press analyses that Bibi wants a war because it will bolster him. There’s no evidence that this has ever happened. Bibi is a status-quo person who is very cautious. People get frustrated. People are still talking and annoyed about the last cease-fire a few months ago.

Netanyahu’s political opponents have certainly taken the opportunity to criticize his handling of the latest escalation. Gantz accused him of being weak on security and “paying protection to Hamas.” Labor leader Avi Gabbay said the prime minister, who doubles as the defense minister, wasn’t hitting Gaza hard enough to stop the attacks. Kulanu party head Moshe Kahlon called for a return to targeted killings of Hamas leaders.

“Some people are tweeting a lot of tripe about Netanyahu wanting to fight an ‘election war’ in Gaza,” Haaretz journalist Anshel Pfeffer tweeted.

“Bibi is totally aware once he cries havoc in Gaza the dogs can’t be leashed easily again. War on April 9 won’t bring him voters. Netanyahu doesn’t trust the IDF, certainly not its ground forces, to deliver the result he needs — a fast operation with minimal Israeli casualties. He only used large-scale ground forces once in 10 years, in 2014, and that was after being dragged in despite his wishes.”

And that is not the Netanyahu brand.

“Netanyahu’s biggest asset in this election is having kept the calm for a decade without giving the Palestinians concessions,” Pfeffer said. “Soldiers coming back in coffins will lose that asset. He’s in a lose-lose situation now after being shown up so many times recently by Hamas rockets.”

Meanwhile, the current escalation appears to have overshadowed the proclamation Trump signed Monday recognizing Israel’s authority over the Golan Heights, which was expected to burnish Netanyahu’s diplomatic credentials with voters.

Netanyahu expressed anger at the media for what he perceived to be their failure to headline an important event.

“That you haven’t covered this more than a minute is something you will be held to account for, but in the reckoning of history,” he told Israeli reporters in Washington, Globes reported.

On the other hand, the conflict has also pushed the latest developments in the corruption cases against the prime minister off  the front page.

In sum, the timing of this week’s violence isn’t the political boon some pundits are making it out to be.

“We’re 2 1/2 weeks before an election and it’s hard to see any possible outcome that will be good for him,” Harkov said. “No matter what comes out of this, it will be very easy for opponents to criticize him and people won’t be happy.”