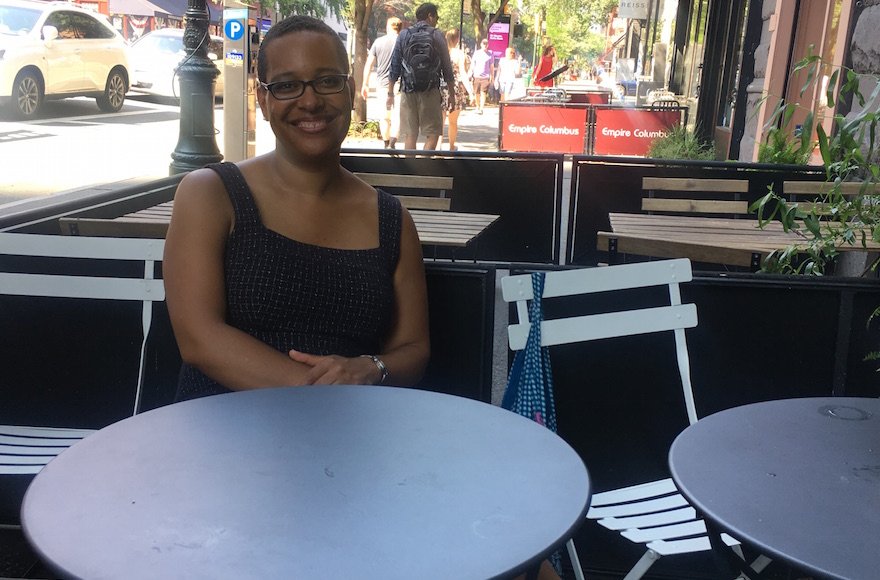 Rabbi Georgette Kennebrae grew up in a military family that moved between Japan and Oklahoma. (Josefin Dolsten)

NEW YORK (JTA) — As a Jew of color, Rabbi Georgette Kennebrae has had her fair share of experiences that have made her feel less than welcome in the Jewish community. People sometimes assume that she is a member of the synagogue janitorial staff rather than the rabbi. Sometimes when visiting a synagogue, she’ll be asked if she’s lost.

In her position as the newly installed rabbi of West End Synagogue, a Reconstructionist congregation on the Upper West Side, Kennebrae aims to challenge notions of what a Jew looks like.

Kennebrae, 42, wants to make people “understand that I’m not rare as a Jew of color, that there are many of us and that it shouldn’t be an automatic assumption that I’m a Jew-by-choice because I’m brown,” she said at a coffee shop near her congregation.

Earlier this year she was awarded a Schusterman Fellowship, an 18-month leadership development program of the Charles and Lynn Schusterman Family Foundation.

Jewish organizations are increasingly focusing on embracing diversity within their own communities and highlighting the voices of Jews of color. Though 11 percent of American Jews do not identify as white, according to the Steinhardt Social Research Institute’s American Jewish Population Project, there are relatively few people of color in visible leadership roles in the Jewish community.

Kennebrae, who was installed last month and has been working at the synagogue since last August, was born in Japan, where her father was serving in the U.S. Air Force. His job later took the family to Oklahoma, when Kennebrae was 2 years old, and then back to Japan for a year when she was 9.

She enjoyed moving around and says it helped her gain skills that prove useful in her work as a congregational rabbi.

“When you are constantly moving, you have to be open to what is there and being where you are, and meeting people where they are and figuring out ways to build bridges and connect,” Kennebrae said, “and I think that’s what we do as congregational rabbis as well.”

Her family was Protestant but not religious, and she did not attend church growing up. In college, she joined an African-American Southern Baptist church but found there was still something missing.

Her interest in Judaism came as she was struggling with another aspect of her identity: her sexual orientation. As she grappled with coming out as a lesbian, a friend gave her the book “The Chosen,” by the late Jewish author Chaim Potok. The book’s chronicling of two Orthodox boys struggling with religion appealed to her.

“I just loved the ability to ask questions — that wasn’t present in my Southern Baptist community,” she said. “I really longed for that, so I started exploring.”

Kennebrae eventually ended up converting to Judaism, and found similarities between being part of a military family and being Jewish.

“They’re both deeply rooted in tradition, they both have cultures of their own, they both have their own language, or sets of languages that they use, so you either know it or learn it, and they’re largely centered in various places,” she said.

Her experience in a military family made her want to support others in similar situations. Her original goal in enrolling in the Reconstructionist Rabbinical College was to be a chaplain. During her studies, Kennebrae realized that she wanted to be able to build long-term relationships with the people she would serve — and that required a different route.

“When you move every two or three years it’s a little more challenging to make that happen, so I fell in love with congregational work,” she said.

“I love the fact that I can do a baby naming, I can marry people, officiate at their weddings and when the time comes, God forbid, I bury their parents or their grandparents. It takes longevity in order to build those relationships.”

During rabbinical school, she did internships at the Reconstructionist Synagogue of North Shore on Long Island, the Bristol Jewish Center in Pennsylvania and Congregation Beit Simchat Torah, an LGBTQ synagogue in Manhattan.

Kennebrae, the mother of three teenagers, is passionate about encouraging conversations on difficult topics, including death and end-of-life decisions. She thinks that as families shifted away from caring for elderly relatives in the home, the topic has become more taboo and scarier.

“I deeply believe that when one is able both individually and as a community to look at our mortality, and to acknowledge it and to acknowledge our fears and our worries, and to work through them and to plan for it, it exponentially enhances one’s life,” she said.

Judaism has rituals that help mourners deal with loss, such as the weeklong shiva and 30-day shloshim period that follows a death. But there is less of a focus on preparing for death before it happens, Kennebrae says. She is participating in What Matters, an initiative at the Marlene Meyerson JCC Manhattan that uses Jewish values to encourage conversations about end-of-life decisions.

“We are working on what happens before death,” she said. “Do we have our ethical wills in place? Have we done our legal wills? Have we decided what we want or not to happen to us if we’re in a hospital?”

“I feel really blessed,” she said. “People sometimes ask me about my community, and West End Synagogue has a black, lesbian, female rabbi, and that’s just another celebration of Judaism.”

The post Gay and African-American rabbi wants to shatter stereotypes of what a Jew looks like appeared first on Jewish Telegraphic Agency.