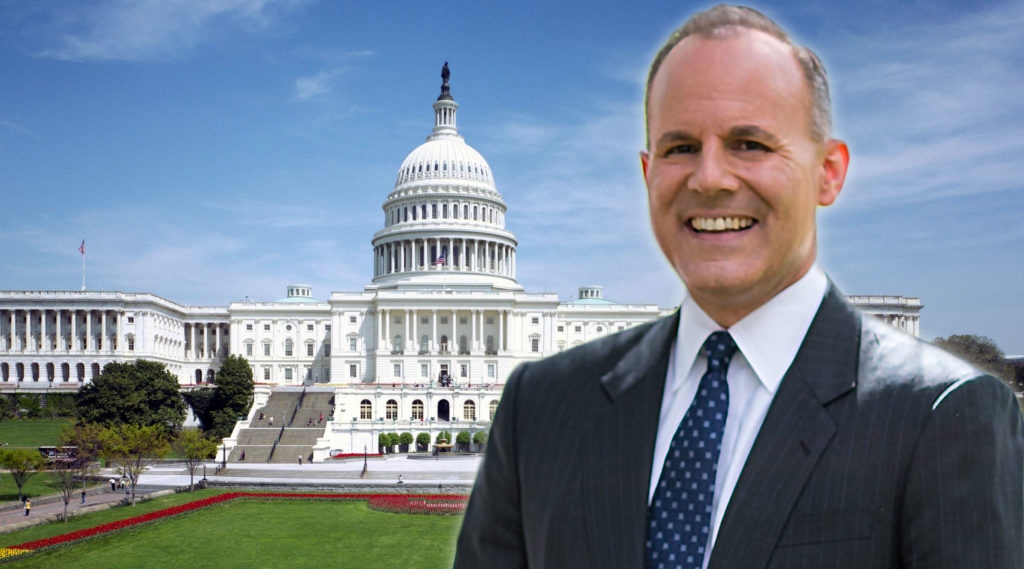 That makes him perfect for his new job as the State Department’s special envoy to monitor anti-Semitism, according to people most familiar with his appointment, which was made public on Monday.

Ira Forman, Carr’s predecessor, who has been leading calls for President Donald Trump to fill the position — unfilled since Forman’s departure two years ago — said Carr’s CV speaks well of the skills he brings to the post.

“His political skills should serve him well because part of the job is the art of the possible,” he said, referring to the gang prosecutor’s 2014 run for Congress in a Los Angeles-area district. Carr won a spot in the runoff but lost to Ted Lieu, a Democrat. Carr ran as a moderate pro-immigration Republican.

Forman, who has yet to meet with Carr, also cited his successor’s background in the U.S. Army, his leadership of a Jewish fraternity, his day school background, his mixed Mizrahi-Ashkenazi heritage and his fluency in Arabic and Hebrew.

And Forman, whose background before he was anti-Semitism monitor was partisan Democrat — he was the longtime head of a Jewish Democratic group — said the community should be grateful now that Trump and Secretary of State Mike Pompeo have filled the job.

“We’ve all been complaining it hasn’t happened and we should now be happy it’s happened,” said Forman, who now works with Human Rights First, an NGO, to monitor and combat anti-Semitism.

Indeed, some of the organizations that have been leading the criticism of Trump for the delay could barely contain their pleasant surprise: There were rumors that Trump might fill the slot with an unqualified donor or, worse, someone linked to the far-right elements that helped propel Trump to power and have influenced some of his policies, particularly on immigration.

Instead they are getting Carr, an affable, cross-the-aisle type of Republican who has gotten down and deep combating anti-Semitism and anti-Israel activity on campuses.

“Carr knows all too well the scourge of hate,” Greenblatt said. “His grandfather was imprisoned after an anti-Semitic show trial in Iraq, where Elan later served as a U.S. Army judge advocate. He has been a leader in the fight against anti-Semitism on college campuses and has long advocated for working across the aisle to craft thoughtful compromises, including in support of Israel.

“We deeply admire his public service and look forward to working with him in his new role,” the statement concluded.

The American Jewish Committee said it was “grateful” for the appointment, and also noted in its statement the intensive lobbying by the Jewish community and others to fill the congressionally mandated job.

Jewish Democrats in the U.S. House of Representatives welcomed the appointment, but also emphasized the long wait.

Rep. Nita Lowey, D-N.Y., the chairwoman of the Appropriations Committee, said the appointment was “long overdue.” Rep. Eliot Engel, also D-N.Y., the chairman of the Foreign Affairs Committee, praised Carr for his past work “across partisan divides” but added, “It is unacceptable to have waited over two years for this appointment. For too long, the Trump Administration failed the global Jewish community.”

Groups that have smoother relations with the Trump administration were, not unexpectedly, enthusiastic without qualifications. The Wiesenthal Center said Carr “brings to the Special Envoy position boundless energy and a keen legal eye.” B’nai B’rith International called the appointment “outstanding” and the Israeli American Council said there is “nobody more qualified” than Carr.

“I’m very impressed with him,” said Rabbi Andrew Baker, the representative on combating Anti-Semitism for the OSCE, who first met with Carr last week. “He’s smart, he’s thoughtful, he’s fully ready to roll up his sleeves and put himself into this.” Baker is also AJC’s director of international Jewish affairs.

Carr has met or planned meetings with predecessors from both Republican and Democratic administrations.

“He sees this as a nonpartisan job,” said Matt Brooks, the executive director of the Republican Jewish Coalition who has known Carr for decades. “He’s got real seichel,” common sense, “in picking brains and not feeling threatened by his predecessors.” Carr did not return a request for an interview.

Carr, 50, has since 2004 served as a criminal prosecutor in Los Angeles County, specializing in gang violence. His approach has been holistic, focusing on the circumstances that drive youths to crime and not just on the crimes.

“It is agonizing to me to see so many of our kids deprived of a nurturing and empowering education and the chance at a good job after high school,” Carr said in 2016, when he mounted an unsuccessful run for the Los Angeles Board of Supervisors.

The big picture emphasis could serve him well in the job of anti-Semitism monitor, where he will be expected to take officials to task for specific anti-Semitic acts in their countries or even in their governments, while also gently encouraging larger fixes in education and rhetoric to roll back bias.

Showmanship also works: An Obama administration predecessor, Hannah Rosenthal, took a show on the road in Muslim countries and in the United States with Farah Pandith, the State Department’s representative to Muslims. They got attention, news coverage and high level meetings by switching roles: Pandith would inveigh against anti-Semitism and Rosenthal would speak out against Islamophobia.

Carr has a knack for getting attention with acts of dramatic symbolism: As an Army major in Iraq in 2003, he organized a Hanukkah celebration at the palace of deposed dictator Saddam Hussein, who had persecuted the country’s Jewish community.

It was an especially sweet moment for Carr, he told The Times of Israel in 2013, because his grandfather was jailed in Iraq during the anti-Jewish acts following Israel’s establishment in 1948.

“Hanukkah, the symbol of freedom, of conquering a profane and cruel tyranny that defiled a land,” Carr told The Times of Israel. “We were profoundly moved by the experience.”

Carr’s mother is descended from Iraqi Jews, while his father is Ashkenazi. He attended a Jewish day school, spent a lot of time in Israel growing up and joined Alpha Epsilon Pi, the leading Jewish fraternity, at the University of California, Berkeley, which he says helped change his life. He was the organization’s president, or supreme master, from 2012 to 2014.

“There was a concern young Jews were becoming less civically engaged, and learning what civic engagement was, what activism was, by having a program to teach students these opportunities upon graduation, they would be better equipped to seek civic leadership,” he said.

“He’s very engrossing, I’ve never seen anyone speaking contemporaneously like him,” he said. The board picked Carr for the 2012-14 term because it coincided with AEPi’s centenary and the fraternity needed a skilled speaker.

Carr, a former member of AIPAC’s National Council, also spent a year in Israel in the 1990s helping its Justice Ministry set up a public defender’s office.