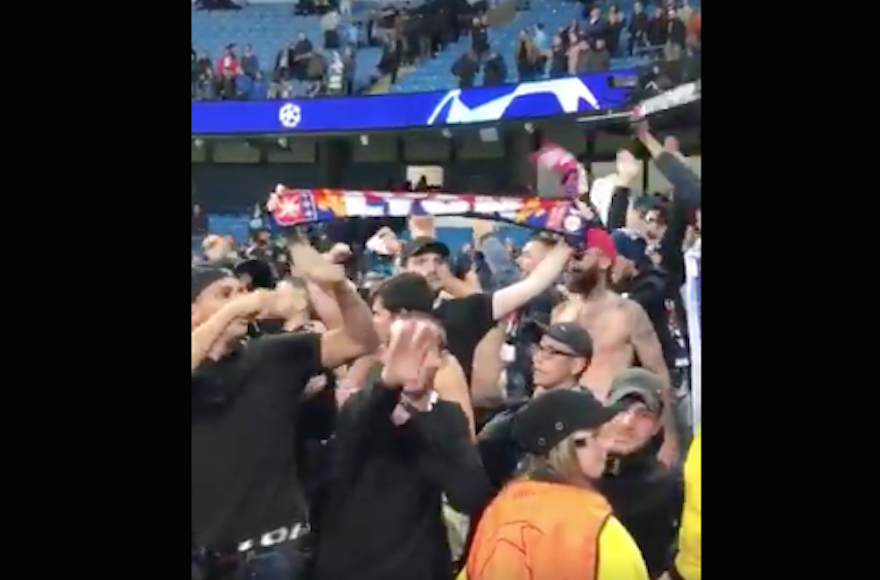 A Lyon fan making a Nazi salute at a game in Manchester, England, Sept. 19, 2018. (Screenshot from Twitter)

(JTA) — A French soccer club said it was looking to ban a fan for giving a Nazi salute during a game.

The unidentified Lyon supporter was captured making the salute in a Wednesday video that was shared widely on social media. The video was filmed following a game between the French team and the British host squad, Manchester City.

“As soon as he is identified, he will be excluded for life,” Lyon said in a statement, according to the BBC.

Police in Manchester said they were investigating the incident.

“This is absolutely abhorrent behavior and it has no place in our community, and no place in sport,” said Greater Manchester Chief Inspector Gareth Parkin, BBC reported.

Soccer clubs and stadiums in several European cities have banned several fans for chanting insults of Jews, as well as praises. Several court cases for incitement to racial hatred have been opened in recent years against fans who shouted anti-Semitic slogans at soccer matches.

Nazi Salute in the Lyon end tonight. No need for that in football. pic.twitter.com/315YAqVkny

The post French soccer club says it will ban fan who did Nazi salute appeared first on Jewish Telegraphic Agency.