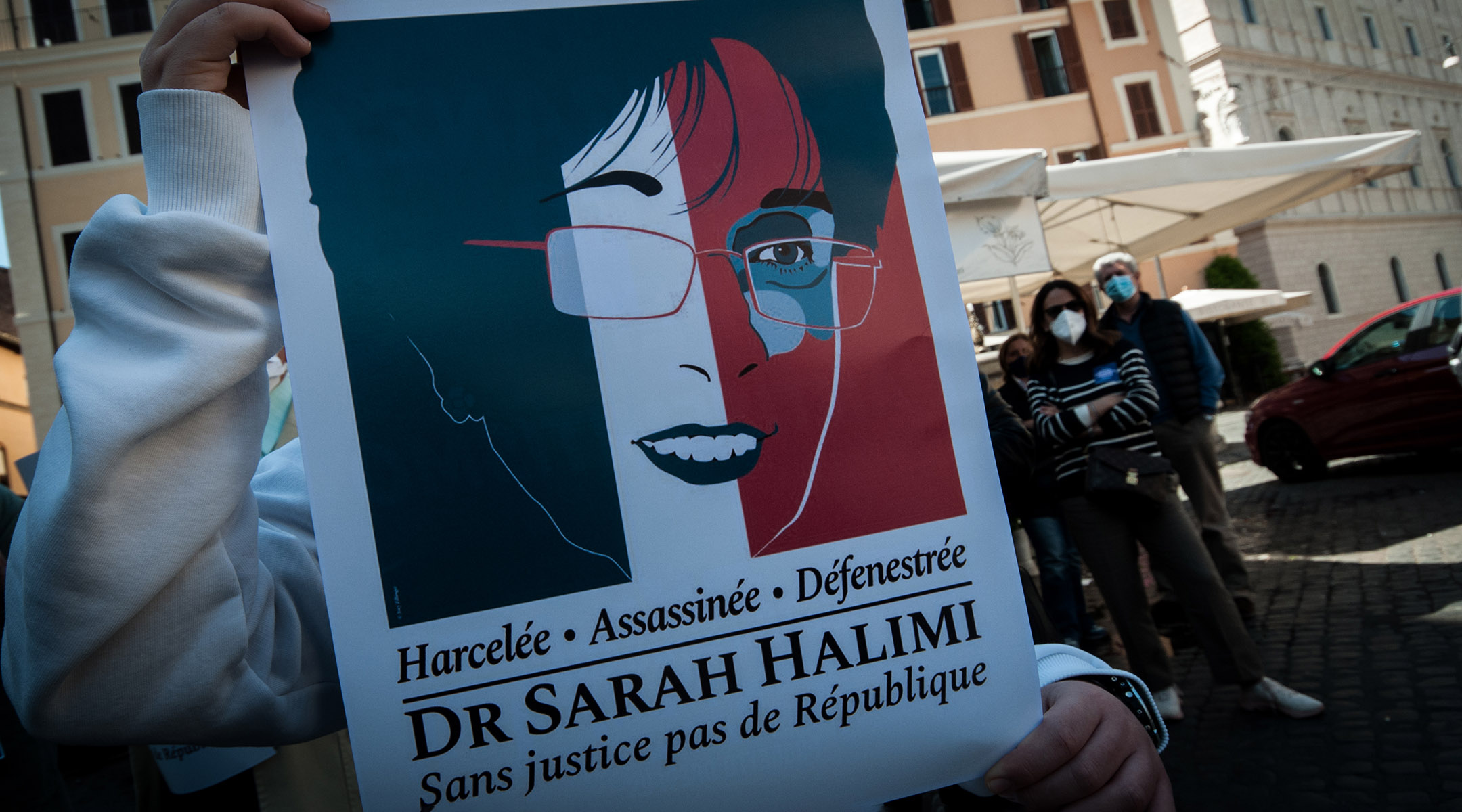 (JTA) — A new parliamentary report on the 2017 murder of a Jewish woman by a Muslim attacker was meant to restore French Jews’ faith in their country’s police and justice systems.

Instead, the report released last week has added fuel to the fire, enraging French Jewish leaders.

Last year, a judge ruled that Sarah Halimi’s professed killer was not responsible for his actions because his consumption of marijuana had induced a psychotic episode. This was despite the fact that the court concluded he was motivated to kill Halimi because she was Jewish.

In the aftermath of the ruling, French Jews led a wave of infuriated protests.

In September 2021, a parliamentary committee led by French Jewish lawmaker Meyer Habib began investigating, in his words, “any dysfunctions” in the case on the part of French police. The committee’s new 67,000-word report found that police officers arrived on the scene before the murder occurred but did not stop it.

Despite that finding, and others that paint a muddled picture of the day of the crime, the committee wrote that none of the officers, judges, psychiatrists or anyone else involved in the case had done anything wrong.

Habib and other non-Jewish committee members railed against the final recommendations, but it passed by a vote of 7-5.

Here’s what you should know about the report, and why it matters to the French Jewish community.

The report summarized some of what was known, but it also revealed many new details to the public. These are the key findings, from the committee’s point of view:

-Kobili Traore, a 31-year-old French-Muslim man of Malian descent, forced his way into the 65-year-old Halimi’s Paris apartment and killed her — brutally, as was previously known, by beating her and throwing her out of a window — because she was Jewish. Prosecutors also already knew that Traore recited verses from the Koran and shouted antisemitic statements during the murder.

-Police had arrived on the scene in response to calls by Halimi’s neighbors, who heard her cries. The report adds that the officers were given keys to Halimi’s apartment when they arrived, long before Halimi’s death. But they waited outside as Traore beat her — the report says they “could not prevent” her death and followed all relevant procedures closely.

-The medical evaluation that led to Traore’s admission into a psychiatry hospital — before he could be given a trial — was “of good quality,” the report adds, despite challenging circumstances. He may be released from the psychiatric facility where he is held pending a recommendation by his doctors, if approved by a police commissioner.

-In the chain of events that led to the decision not to try Traore, “the judiciary followed perfectly the procedure” determined by the law, the report reads. The police’s handling of the case “does not represent a failure.”

Habib and two other members of the committee — lawmakers Constance Le Grip and François Pupponi, who are not Jewish — strongly objected to each of the key findings, arguing they defy common sense.

Habib, a member of the centrist UDI party, wrote a scathing criticism that was included in the final version of the report. He noted the recent testimony given to the committee by the neighboring Diarra family, who said they gave police keys to the building and to Halimi’s apartment, and claimed that the police did not intervene when Halimi could have been saved.

In a radio interview, Habib compared the ordeal to the infamous 19th-century Dreyfus Affair, one of French Jewry’s most traumatic episodes, which involved a wrongful espionage conviction for a French Jewish soldier.

“It’s a tragic case. It’s a second Dreyfus Affair. It’s a denial. It’s a disgrace. There was no trial, the murderer is on his way to freedom,” added Habib, a former leader of the CRIF umbrella group of Jewish communities.

He told Radio J, a Jewish community broadcaster, that fellow lawmakers “refused to tell the truth, refused to come with us to the site to see the conditions, to see whether the 10 police officers who were there lied when they said they didn’t hear a single cry of a woman whose death cries, uttered for 14 minutes, had woken up the whole building. And yes, they lied.”

Florence Morlighem, a lawmaker in Macron’s centrist Republic on the March party, compiled the report’s final wording. She criticized Habib in the report, alleging that under his leadership, the committee “heard unacceptable remarks that feed the idea of a conspiracy on the part of authorities and the judiciary to silence this affair.”

Leaders of French Jewry reacted critically to the report, and especially to a statement Morlighem made during a committee meeting. According to minutes from the session, Morlighem said that police likely didn’t hear Halimi scream because, “in light of the dimensions of Traore, and the photos of Sarah Halimi’s cadaver, I think she did not scream for a long time.”

Critics called her language callous and her reasoning flawed.

“Inacceptable remarks by the rapporteur,” Francis Kalifat, the president of CRIF, wrote on Twitter earlier this month. “Florence Morlighem is exacerbating the denial of justice to Sarah Halimi by adding to it the denial of her suffering.”

Morlighem said some of her remarks had been “twisted and pulled out of context,” giving the impression that she had downplayed Halimi’s suffering. She added on Twitter that she regrets this false impression.

Why it matters, and what’s next

Last month, the French senate passed a law nullifying temporary insanity defenses related to the voluntary ingestion of drugs, in what observers said was a direct reaction to the so-called “Halimi affair” by President Emmanuel Macron.

But that has not satisfied French Jewry, whose protests last year were the largest against their government in decades. They feel betrayed and abandoned by a state whose support they view as crucial for enduring an increase of antisemitic violence since the early 2000s. The last decade saw a surge in French Jewish immigration to Israel – about 50,000 of them have made the move since 2010, a major increase over the previous decade.

Macron has made inroads with the French Jewish electorate, including by declaring at a Holocaust commemoration ceremony in 2017, shortly after his election, that anti-Zionism is a form of antisemitism — an unprecedented assertion by a sitting French president. Many Jews and non-Jews support his relatively tough stance on what he deems radicalized Islamists,

But the Halimi affair could emerge as a major political issue as France nears new presidential elections in April. Macron’s foremost challengers are the far-right candidates Marine Le Pen and Éric Zemmour, who will both likely seize the opportunity to criticize the incumbent as weak on combating antisemitism.

Zemmour, who is Jewish, has not yet commented on the report. But he has followed the case closely and has written about it in the months preceding the recent launch of his campaign in a column for Le Figaro, titled, “You’re in France. Welcome to the crazies!”

“Is it a crime? No! An antisemitic murder? Nonsense! An Islamist murder? Let’s not generalize! The experts have evaluated, studied, decided. The experts exerted their expertise and their word is holy. Kobili Traore is crazy.”