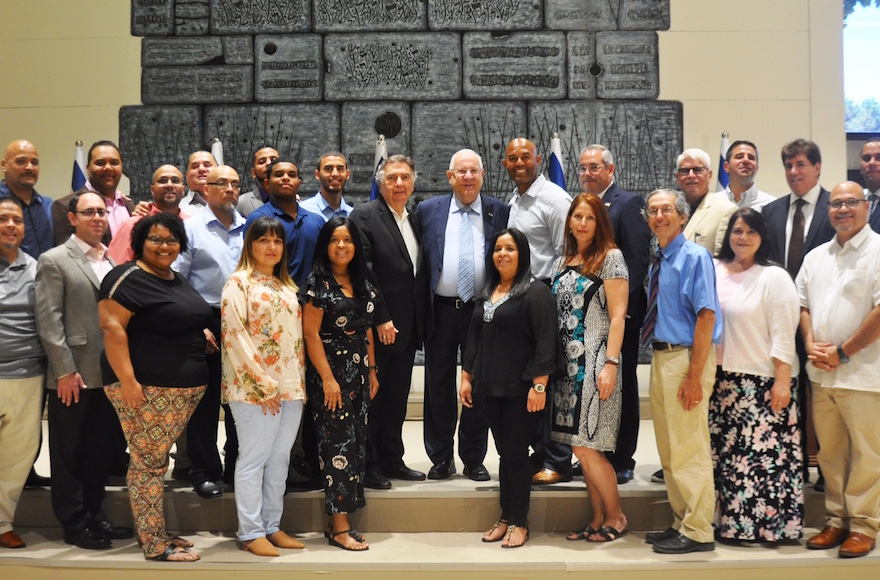 Israeli President Reuven Rivlin, center, with Mariano Rivera, to the right, and other members of the retired Yankee’s church delegation in Jerusalem, July 31, 2018. (Office of the President)

The Panamanian-American former baseball player arrived in Israel on Monday as part of an interfaith mission organized by the New York Board of Rabbis and the Consulate General of Israel in New York.

Rivera and the group toured the country, visiting Jewish and Christian sites, and met with  President Reuven Rivlin and U.S. Ambassador to Israel David Friedman.

It was Rivera’s second visit to the Jewish state; he went on a family trip in 2015. Major League Baseball’s all-times saves leader was accompanied by his wife, Pastor Clara Rivera, and members of their church, Refugio de Esperanza-Refuge of Hope, in New Rochelle, New York.

Rivera, who retired in 2013 after 19 seasons — 13 as an American League All-Star — spoke highly of meeting with Israeli soldiers.

“I’m privileged and honored to be here, and learn about the young men and women who are here in the IDF, being trained to be a better person, a better citizen, and a better human being,“ he said, according to a statement from Friends of the IDF, which organized the visit to the Michve Alon base. “For me, it was something special that I will take with me through my life.”

The mission will return to the United States on Sunday.

In 2013, the New York Board of Rabbis elected Rivera Man of the Year. The interdenominational group chose Rivera because of his philanthropic work and the extensive relief work he has done for Panama through his church.