Marian Offman, former deputy chair of the Jewish community of Munich and Upper Bavaria, clashed verbally with the demonstrators at the anti-government rally in the Bavarian state capital. Offman challenged the protesters for comparing pandemic restrictions to the persecution of Jews during the Holocaust, and police eventually intervened.

He filed the charges Nov. 9, while the unnamed demonstrators, including a representative of the far-right Alternative for Germany party, of AfD, also filed charges against Offman. Offman told the Jewish Telegraphic Agency that he had cursed them out after challenging them on antisemitic posters and statements.

Police at the scene led Mr. Offman away “like a criminal,” he said in a telephone interview from Munich.

The incident occurred on the 84th anniversary of Kristallnacht, the Nazi pogrom against Jews and their property that foreshadowed genocide. Some 350 adherents of the German Querdenker (“contrarian”) movement had chosen the anniversary to protest against government pandemic restrictions and against the imprisonment of pandemic deniers and proponents of conspiracy theories.

The use of Holocaust imagery to protest coronavirus protocols and other public health measures became frequent in Germany during the pandemic, testing the country’s strict laws against trivializing or minimizing the Holocaust. In June 2020, Munich made it illegal to trivialize the Holocaust at such demonstrations, after several cases in which people wore yellow stars printed with the word “unvaccinated,” or held posters comparing themselves with Anne Frank.

Offman, 74, who served as a member of the Munich city council until 2020, had been attending a counter demonstration of about 300 people on Max-Joseph-Platz, a large square in the city center, when he saw an anti-vax demonstrator “holding a poster with a Jewish star on it, which is forbidden,” he told JTA.

“I said to the police, ‘That is forbidden,’ and they took the poster,” said Offman, who then saw a woman holding a similar sign. “I asked her if she thought it is ok to have a demonstration like this of all days on the ninth of November,” the anniversary of Kristallnacht.

She countered, inaccurately, that it was also the anniversary of a failed attempt on the life of Adolf Hitler by George Elser, which took place on Nov. 8, 1939. “I said I was sorry that they had not killed Hitler, and if I had had the chance, I would have done it, given the fact that part of my family was wiped out by the Nazis. Then she asked me: ‘Where is your humanity?’ I was so surprised, but I said nothing. Then she said, ‘People like you can get away with anything, you are above the law.’ It was blatant antisemitism.”

A man — later identified as a politician from the AfD — then asked Offman if he would separate people according to whether they wore masks and had been vaccinated. Offman said that, as a property manager, he attended meetings in which vaccine protocols were enforced by mutual consent.

“The man said, ‘Oh, so you are also selecting people,’” referring to the Nazis’ selections of people for extermination at death camps. 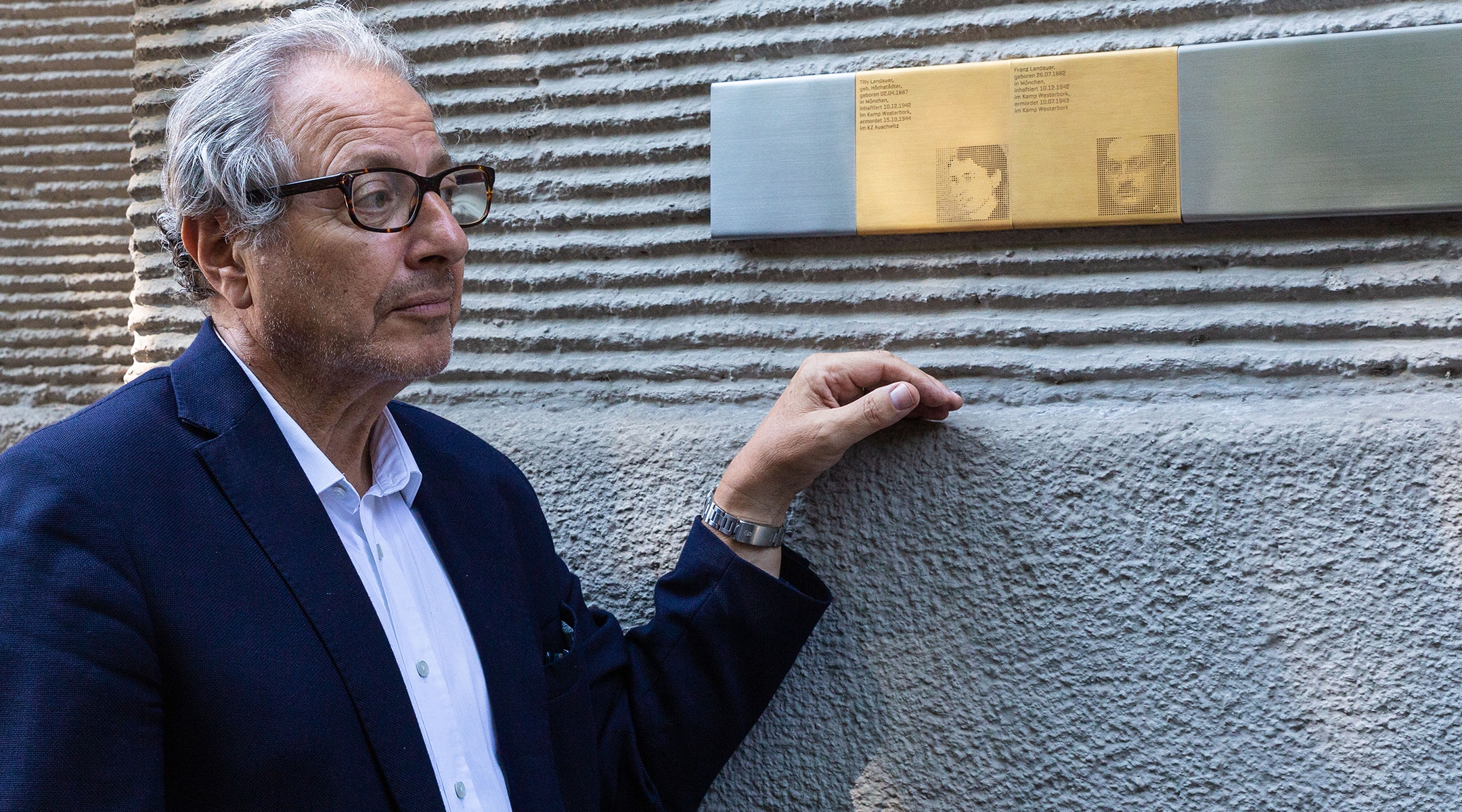 Offman said this infuriated him: “On one hand they say they are being treated like Jews, and on the other side they trivialize the Holocaust,” he said. “I got very angry, called him an asshole, and said ‘I’ll take you to court because of this.’”

Offman also objected when police escorted him from the scene, taking him by both arms. “I said, ‘Please stop it, I will go with you.’ But they treated me like a criminal.”

Police spokesperson Sven Müller told JTA that all three individuals “were brought to a processing station of the criminal police at the edge of the demonstration, where the charges were registered; after 20-30 minutes all were then released.”

Offman was also dissatisfied after a follow-up meeting held Monday with Munich’s police chief and deputy police chief, the antisemitism officer of the Bavarian judiciary and Offman’s attorney.

“They agreed that what the police had done was not good. But when I asked them if they would like to tell this to the press, they said ‘No we will not,’” Offman said.

In a statement after the incident, police spokesperson Andreas Franken blamed “a group of young police officers” from various units who did not know who Offman was. “I can understand that a citizen of the Jewish faith feels emotionally burdened in such a situation with the context of the meeting and the special date,” Franken said.

Offman said he did not plan to file charges against the police officers, who were “just following orders” when they hustled him off. He described the incident as painful, both physically and psychologically, heightening his feeling that he did not want to live in Germany anymore. But he told JTA it was too late for him to start a new life elsewhere. Instead, he will continue to attend counter demonstrations against the far-right, he said.

Meanwhile, according to the Suddeutsche Zeitung newspaper, the organizer of the right-wing demonstration, attorney Markus Haintz, ended the event early after speaking with an unnamed “gentleman of Jewish origin” who apparently convinced him that the rally should not have been held on the Kristallnacht anniversary.