For the first time ever, Stockholm has a Swedish-born rabbi

(JTA) — The rabbis who work in Stockholm usually speak very little Swedish and are unfamiliar with Swedish culture.

That’s because the Jewish community in Sweden — around 15,000 people out of the country’s total population of 10 million — is small enough that they usually need to import rabbis from elsewhere.

While that is the case in many European and other countries with small Jewish populations, Sweden presents its own specific challenges to the incoming rabbis. Many Swedes are known to be polite but closed-off, which can make it hard to get to know congregants.

None of this is a problem for Mattias Amster, who in July became the first rabbi born and raised in Sweden to hold a pulpit in the nation’s capital.

Swedish-born rabbis have worked in other cities but not in Stockholm, which is home to about 4,500 Jews, making it the country’s largest community.

Amster, himself a Stockholm native who left the country in his 20s, brings with him deep knowledge about Swedish culture.

“One thing I’ve noticed, it’s fun for people that it’s someone they can relate to,” Amster said.

Amster spent eight years learning at Orthodox yeshivas in Israel, where he received his ordination and met his American-born wife Esther. There the couple had two children, Gita and Shmuel, before moving to Oregon, where they spent two years working for Portland Kollel, an organization that offers Jewish educational programming to Jews from a range of backgrounds.

Now Amster, 36, has returned to his roots as the Orthodox rabbi of the Swedish capital. The community traditionally employs one Orthodox and one non-Orthodox rabbi. There is also a chapter of the Orthodox Chabad Lubavitch movement that operates outside of the official community.

For his part, Amster, whose wife recently gave birth to their third child, says it feels “fantastic” to be back in his hometown. He will work together with the city’s Conservative rabbi, Ute Steyer, to lead the local community; he is in charge of Orthodox life, while Steyer is in charge of non-Orthodox life.

I grew up in Sweden’s Jewish community and used to reminisce about it over Shabbat meals in Israel with the Amsters. I spoke to the rabbi about Jewish life in his native land, his journey to becoming an Orthodox rabbi and the country’s controversial response to the coronavirus pandemic. 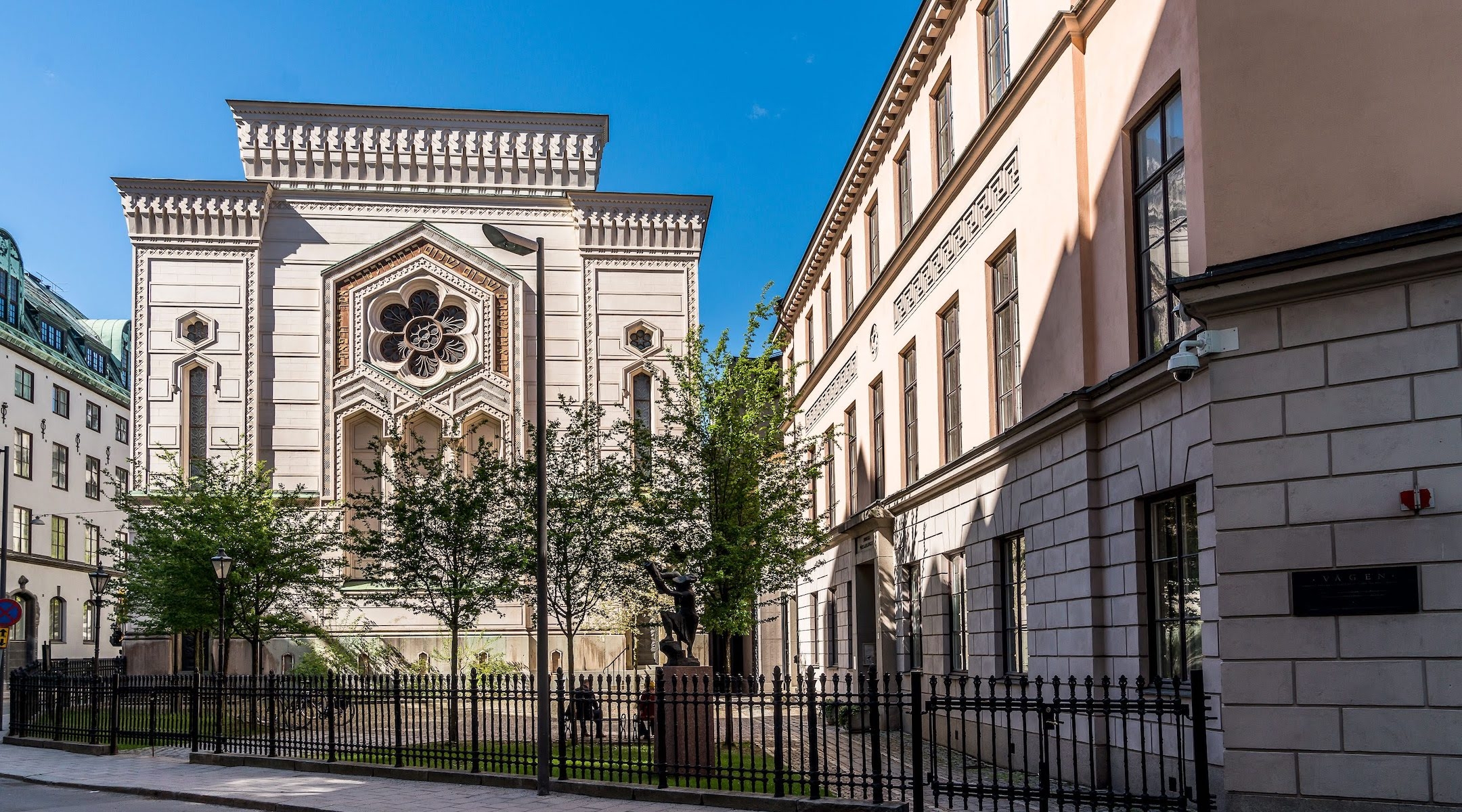 Stockholm’s main synagogue is led by Rabbi Ute Steyer. (Courtesy of the Jewish Community of Stockholm)

JTA: What is it like to be back in Sweden?

Amster: It feels fantastic, but it’s different. Part of it is that I came back with a family, and then to have come back to a Stockholm that I left almost 10 years ago and in a pretty new role. But it’s really fun.

Tell me about growing up in Sweden.

I grew up pretty involved in Jewish Stockholm. I went to the Jewish day school and to summer camp, where I also worked as a counselor.

Was your family religious?

No, but we did yontif [celebrated holidays] and Shabbos sometimes. My family has always supported me, but I was the one who escalated it and became more frum than anyone in my family has been for a pretty long time. On my father’s side I’m third generation here and on my mother’s side I’m fifth. My father’s family came after the Holocaust from Poland and Hungary and my mom, it was from the same areas. A belief in God has always been a part of me. From my bar mitzvah, I became more and more involved. And then the plan became to take the step to leave Sweden to study and in the end I dared to take that step. Because if you want to study Torah in yeshiva or religious texts in general, that doesn’t exist a lot in Sweden. I felt that if this is what I want to do I need to understand it deeply, and then you have to go to the U.S. or Israel and then Israel, it’s also a dream to move there, so I took two dreams and joined them together and moved to Israel. I was 24 or 25 years old. It was scary to leave everything and give something your 100% effort.

I grew up in Lund and Gothenburg, so it’s a bit different than Stockholm. Most people maybe wouldn’t eat pork but I knew almost no one who was religious in an Orthodox way. And then at my school — I didn’t go to a Jewish school — it also felt like people thought it was weird if you believed in God. People in Sweden are very secular.

One hundred percent. I can tell you in university, I would come to class after shacharit, the morning prayers. People could sometimes see marks from my tefillin. In the end, one of my friends who wasn’t Jewish was brave enough to ask me why I always have these marks on my arms, and then I said “It comes from tefillin, you put it on in the morning.” And then he said “Do you believe in God?” And I said “Yes,” and he said “But you seem so normal.” It was very funny.

It’s very different here in the U.S. Even for people who aren’t religious, religion is a part of society in a completely different way so it’s not at all weird if you’re a believer in some way, no matter what religion it is.

That’s something that’s very good about the U.S. That people who are not religious are OK with people who are religious and so on. It’s pretty open. The U.S. and Sweden are pretty different but I think it also has to do with the fact that there are many Orthodox Jews in the U.S., there are many non-Orthodox Jews in the U.S., there are very many of all different types of groups, so people are used to it. Here in Sweden, when I walk around with a kippah, there are a lot of people who look with curiosity and they want to show that they are seeing something. Many say “Shalom.” It’s sweet but it’s also about that it’s not common for people to see religious Jews here. It happens almost every day.

It was fantastic. But it was also a shock to realize how incredibly hard it is to study Talmud. It was something I completely fell in love with. There was the thought that I could be a rabbi but I let it go, when I came and realized how hard it was it they came back much later… I studied at yeshiva for eight years, very intense studies.

Then you moved to Portland and worked at a kollel there. What was it like to move from Israel to the U.S.?

You never want to leave Israel but it was an unbelievable feeling to get to work for a very respected organization and to get to know the community there. We were very happy there. It was hard to leave. This was a part of the U.S. that I didn’t know at all. I had never been on the West coast. It was fun to be involved in the Jewish community there and help expand it even more.

How did you find out about the job in Sweden and what was it like to think about maybe moving back?

They advertised the role, and Esther and I talked about it a lot. It felt like this is an opportunity you have to try to get. It was of course something I had thought about, I felt that I probably could do well and it would be very amazing to give my everything, and then we applied.

Most rabbis that are hired in Sweden usually aren’t from Sweden — they usually are from the U.S. or Israel.

This is the first time in the [Stockholm] community’s history, 250 years, that we’ve hired a rabbi who’s born in Sweden. So it’s a bit historic, if I’m allowed to say that. It’s an honor that it’s me. One thing I’ve noticed is that it’s fun for people that it’s someone they can relate to, that I’m from here, I know the language and many people know me, of course.

In Stockholm, there are three different synagogues. There’s a Conservative one, which is the largest, and then there are two Orthodox ones. Are you the rabbi of both the Orthodox synagogues?

That is also unique. I’m the rabbi for both of them. I’m hired by the Jewish community as the Orthodox rabbi and that means that you’re rabbi for the Orthodox synagogues, but I have other functions too. Stockholm has a unity community, there’s also a Conservative rabbi. Rabbi Ute Steyer is responsible for the big synagogue but when it has to do to Orthodox life and kosher, then I’m responsible.

How many people go to the Orthodox synagogues in Stockholm?

One of them has about 150 members and the other has 200. Right now it’s very hard because of the coronavirus. You can say what you want about Sweden, but you aren’t allowed to have more than 50 people gathered together. And many are too scared to come.

I wanted to ask about the coronavirus. Sweden has handled it pretty differently than many other countries, even other Scandinavian ones. How has it been for you and your family to move to Sweden during this time?

In general, we didn’t even know when we could move to Sweden. We had several tickets that got canceled. We were supposed to come a month before we did. We were a little nervous before we came here, because it’s been a different approach but now that we’re here we’ve gotten used to it and now, kein ayin hara [“knock on wood”], it has gone in the right direction. We have to hope it won’t increase again.

I wanted to zoom out and think about in general what it’s like to be Jewish in Sweden, not just during the pandemic. There’s a lot in the media about anti-Semitism from different parts of society. How does that feel for you?

I always used to say that there is unfortunately a too big minority of people in the world who don’t like Jews. And there have been and there are problems in Sweden. I have in the past when I lived here felt anti-Semitism and had things that happened, but right now I feel pretty confident in myself and I think it’s important not to be scared, and I’m not scared. It’s like everything else, you don’t feel it until something happens. We have an enormous amount of security at the community and the synagogues, and really it’s very sad that that’s needed. If you really think about it, it’s absurd that it’s necessary. But you have to be pragmatic.