(JTA) — The young attorney seems unsure of herself. As a law professor, she is unaccustomed to appearing in court, so she hesitates at first, unable to begin her summation. But once she gets going, there is no stopping her.

It is the climactic scene of “On the Basis of Sex” a biopic about Ruth Bader Ginsburg that debuts on Christmas. It focuses largely on Charles Moritz v. Internal Revenue Service, a major gender discrimination case that Ginsburg shepherded to trial years before she became a justice on the U.S. Supreme Court. To succeed, she would have to overturn years of precedent.

But the film is more than your typical courtroom drama. While powerful and inspiring, the movie also manages to paint a subtle portrait of a woman finding a place for herself in a society that wants her to stay home and cook.

Viewers here don’t meet “Notorious RBG,” as she is often called these days — the tough, take-no-prisoners liberal pop culture icon of the last decade. Young Ruth is not yet a superhero in 1972. Yes, she is as determined to fight for truth, and is a respected lawyer, but she is still shackled by the misogyny of the time.

That nuanced and honest approach to the character is thanks in large part to the approach of two key creatives — screenwriter Daniel Stiepleman and the film’s star, Felicity Jones.

Jones, a British actress who launched her career at age 12 and has gone on to star in blockbusters such as “The Theory of Everything” and “Rogue One: A Star Wars Story,” had an emotional connection to the film.

“I understood what it felt like as an outsider on so many levels,” she said in a telephone interview. “I grew up on film sets where there were only a handful of women.” 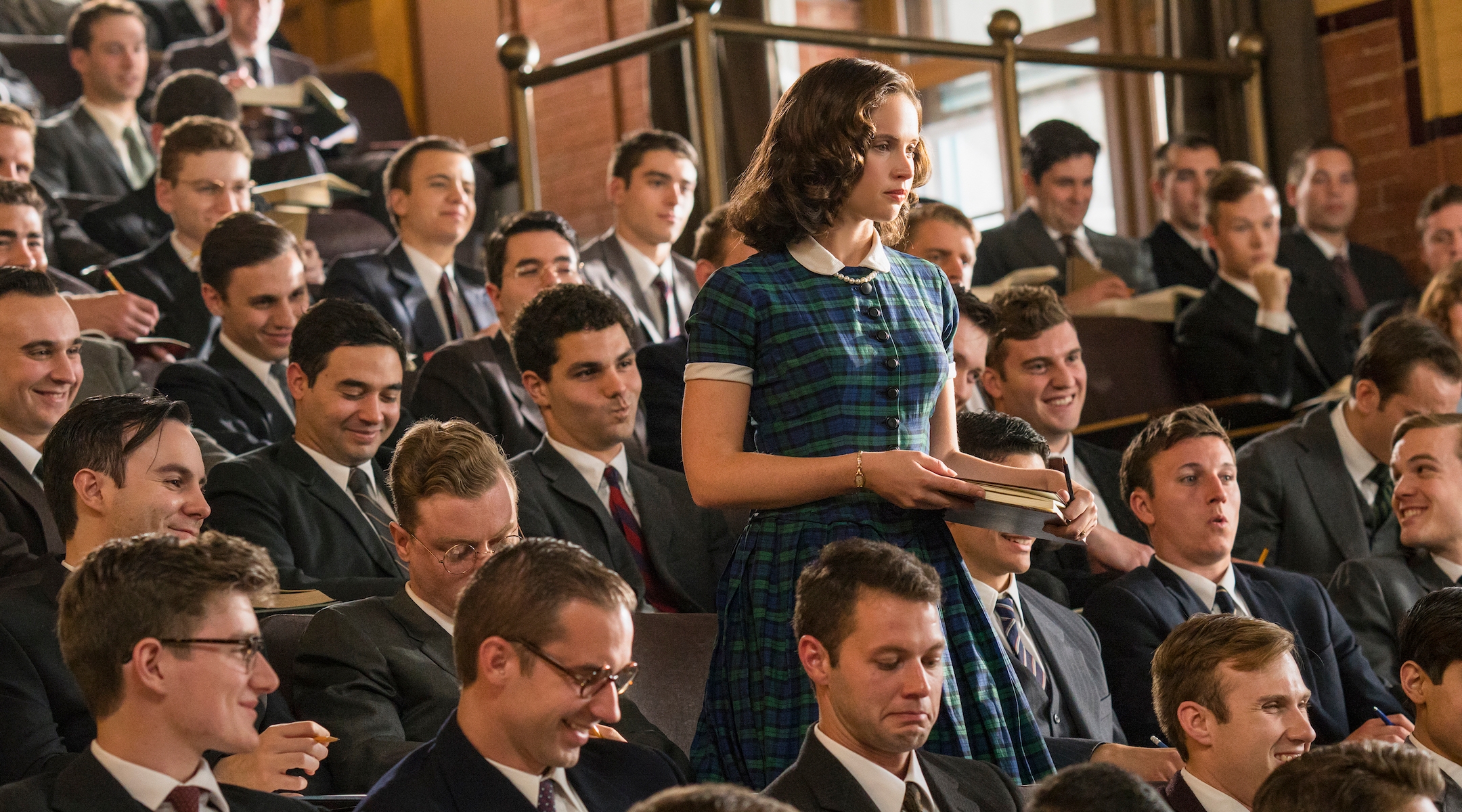 “On the Basis of Sex” recalls that when Ruth Ginsburg entered Harvard Law School in 1956, she was one of nine women in the class, the sixth ever to accept women. (Jonathan Wenk/Focus Features)

Reading the script, Jones said she felt an immediate connection.

“What was interesting to me was trying to find out who is the woman behind the icon,” Jones said. “What are the decisions she made and how did she get to the place where she is now. How did she harness that essence and anger and use it to her advantage.”

Stiepleman, 37, is Ginsburg’s nephew. Ruth’s husband, Marty, was his mother’s older brother. And while he wasn’t exceptionally close to his aunt — he was closer in age to her grandchildren — he remembers being at the Ginsburg house for Passover seders and Thanksgivings. (Hanukkah was normally held at the home of his cousin Jane, Ruth’s daughter.)

The idea for the film originated in 2010 at Marty’s funeral.

“In a eulogy, someone mentioned the only case the two argued together,” Stiepleman said. “Until the end of his life, he said this was one of the most important things he did.”

Ginsburg entered Harvard Law School in 1956, one of nine women in the sixth class ever to accept women.

“Why are you occupying a place at Harvard that could have been occupied by a man?” the dean asks in the film.

“So I can be a more understanding wife,” she responds.

Her husband (played by Armie Hammer), a year ahead of her in school, is diagnosed with testicular cancer. So Ruth juggles her own classes, attends his to take notes and cares for their newborn infant daughter, Jane — all while earning a spot on the prestigious Law Review.

Despite her academic success, no law firm will hire her. One offers secretarial work. Another tells her, “We hired a woman last year. What would we do with two of them?” A third wonders warily if she observes Shabbat.

Ultimately, Ginsburg lands a job teaching law at Rutgers University in New Jersey, but even that is tainted when she realized it was a token hire.

She is angry but at the time, the broad equal protection clause was by precedent applied only to cases of race, not gender. There was little recourse until Marty suggested a unique approach. Charles Moritz, a Denver resident, was denied a tax deduction for home health care for his mother because he was unmarried. Women, divorced men and widowers were entitled to the benefit, but unmarried men were not. The Ginsburgs believed a male plaintiff could change the dynamic. 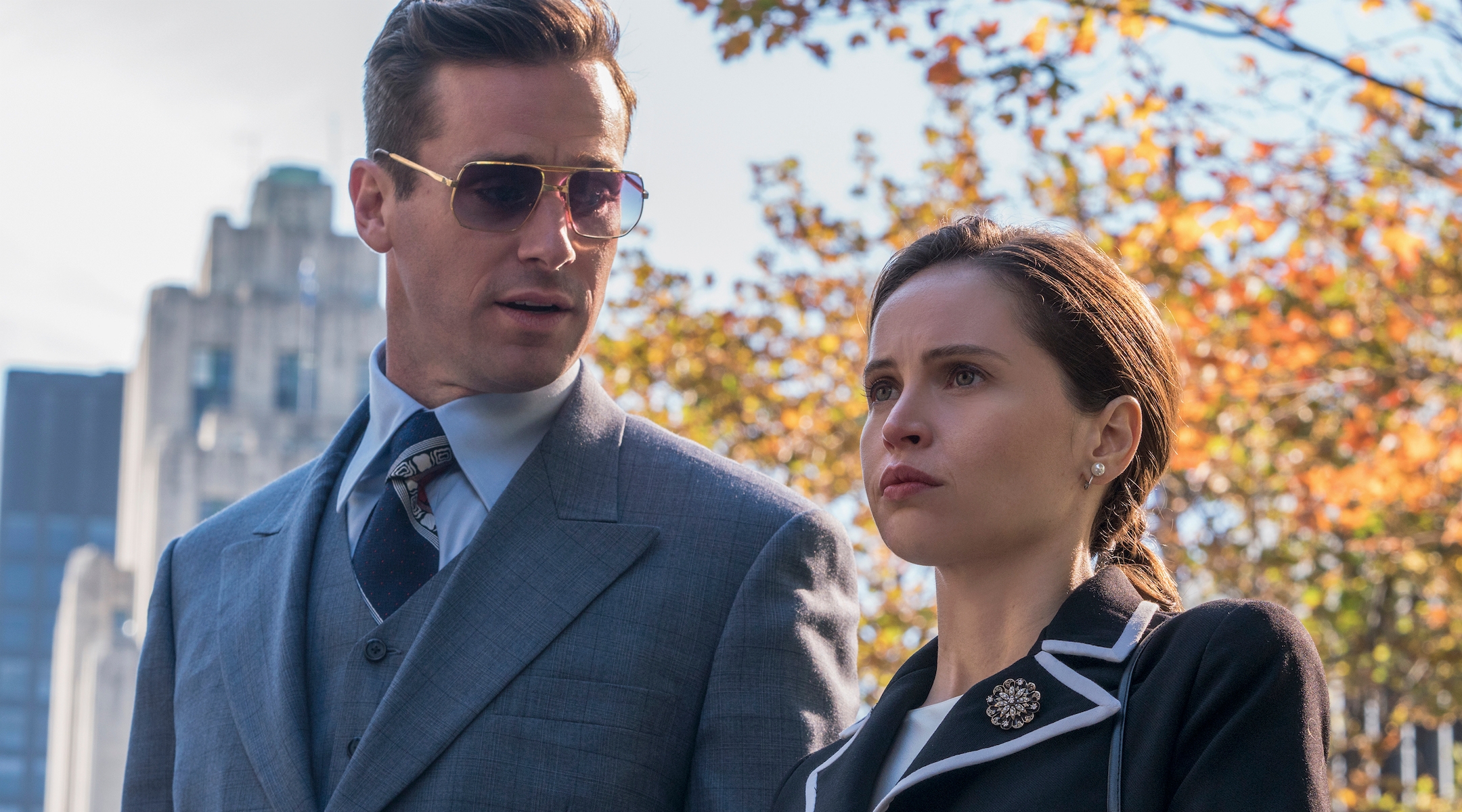 Ginsburg herself was peripherally involved in the film from the beginning, giving her blessing to Stiepleman, opening her files to him and reviewing the script. She never asked for changes involving her character — her focus was on assuring that the law, and Marty, were presented accurately.

On the subject of accuracy, some have argued that the casting of Jones erases Ginsburg’s Jewishness from the film. Natalie Portman had been slated to fill the role, but that fell through in 2017.

When the trailer debuted in July, viewers called attention to Jones’ accent — a far cry from Ginsburg’s nasal Brooklyn tone.

Anna Miriam wrote in Alma that Jones, with her “fine features and her awkward American accent, beautiful, perfectly manicured,” erases “any trace of Ginsburg’s roots.”

Besides the Shabbat reference, nothing else in the film stands out as Jewish.

Jones has played a Jewish character: Margot Frank, sister of the famous diarist Anne, in a 2009 BBC miniseries.

Stiepleman would have none of the criticism.

“I was desperate [to cast] Felicity,” he said. “Ruth has a particular alchemy — steely, driven and precise. But when you get to spend some time with her in the comfort of her home, all of that is undergirded by joy and optimism. Some actresses can play steely. Some can play the joy. But Felicity can combine the two and she channeled Ruth’s essence.”

When asked about it, Jones sidestepped, talking instead about how she focused on capturing details of Ginsburg’s persona.

“Felicity has to depart, and it’s all about becoming Ruth,” she said. “I become obsessive about costume, hair, makeup. I became meticulous, listening to Ruth in court, how powerful her voice is and how her Brooklyn accent comes on strong when she’s frustrated.”

At the time of shooting, Jones was also preparing for her wedding to her longtime fiance, director Charles Guard. For Guard, the timing wasn’t the best.

“I kept telling him he had big shoes to fill,” Jones said. “Look at what Marty does for Ruth!”