Europe is going bananas over this Israeli guy’s avocados 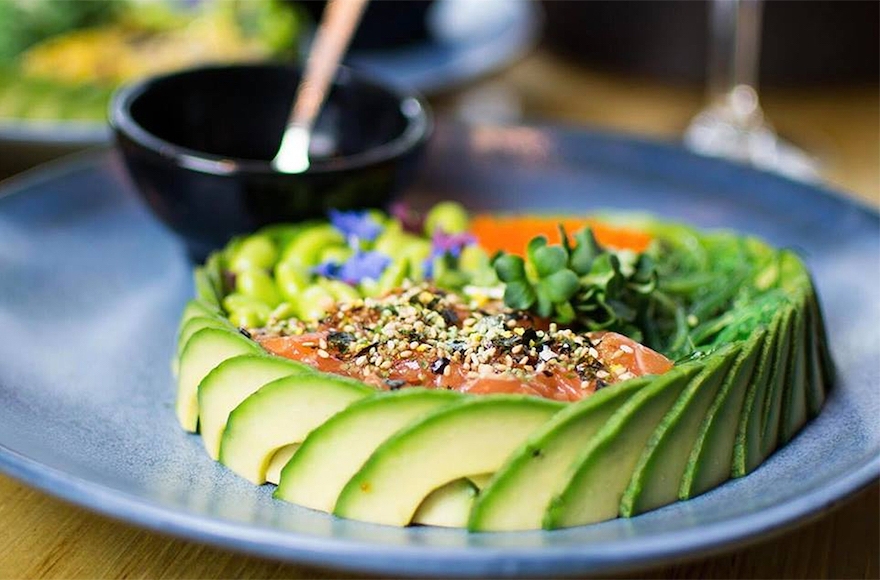 But within just a few months Simpson, a 34-year-old Jewish marketing professional and producer from Amsterdam with no experience in running a restaurant, launched an international chain of eateries with a partner. It is so wildly popular and innovative that seasoned food critics are celebrating it as a cultural symbol and zeitgeist indicator.

As it turns out, all Simpson and partner Julien Zaal needed to take this Dutch capital city’s oversaturated restaurant sector by storm was a small space, a good concept and an Instagram account.

Oh, and avocados. Lots of avocados. About 10,000 succulent, Hass avocados each week, to be exact.

Each item on the menu at their line of restaurants, The Avocado Show – there are two in Amsterdam and another opening in Brussels — is pretty much based on the creamy fruit from Central America.

In addition to avocado salads, avocado pancakes, egg dishes and smoothies, there’s an avocado burger: The meat is sandwiched between two peeled halves sprinkled with sesame to resemble buns. The cocktail department features Guaca Mary and Avo Daiquiri. And for dessert, you can have ice cream, mousse and waffle (take a wild guess as to what flavors are on offer.)

At about noon each day, dozens of patrons – many but not all millennials — queue up at the entrance to The Avocado Show’s main restaurant near the bustling Albert Cuyp market in south-central Amsterdam. On a quiet side street, the mix of locals and tourists patiently wait for a table.

There are only 50 seats, including some on a bright pink velvet couch. Large plants and shiny tables balance out the gray concrete walls. On a wall are three shelves sporting 12 brightly illuminated glass tubes containing avocado seedlings. 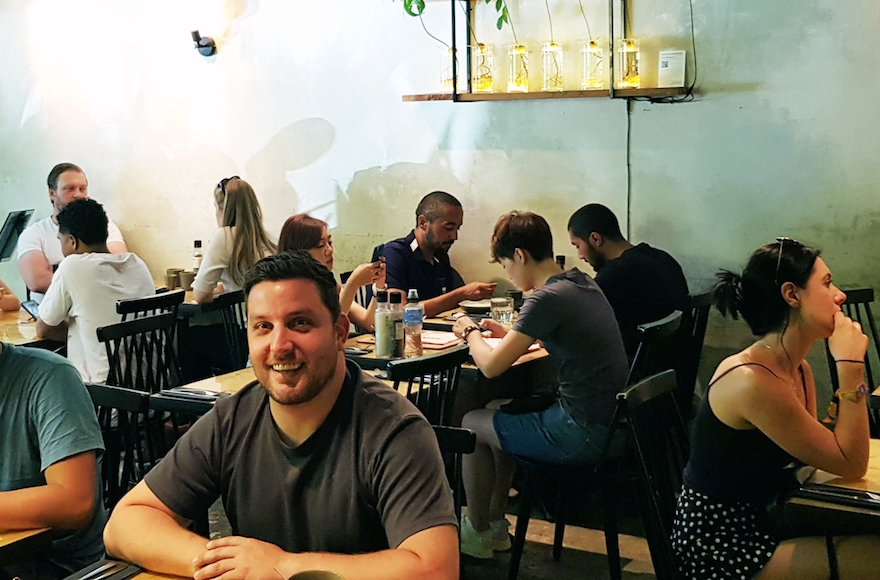 Despite the humble setting, The Avocado Show generated a media frenzy in Holland and beyond. It was featured in hundreds of articles in dozens of languages, with mainstream newspapers in places as far flung as New Zealand reporting about its opening.

“Had someone told me last year that he’s opening a restaurant based on avocado, I would have declared him insane,” Mac van Dinther, the food critic of the highbrow Volkskrant daily, told JTA. “Maybe that’s part of the reason for The Avocado Show’s success: It makes people curious about it.”

“This is why we call ourselves The Avocado Show, man,” Simpson told JTA last week. “The show is on your plate.”

Even when it follows the same pattern, each dish is different, distinguishing itself from other creations in subtle or drastic ways. Many patrons and critics praise the dish’s culinary virtues.

Booker Jennings, a recent high school graduate from Denver, Colorado, said his stack of avocado pancakes was the healthiest he’s ever had and “not something you can get at home.” His travel buddy, Mark Gardner, said the lean bacon at The Avocado Show “is so fresh, so good. The best I’ve had.”

Of course, not everyone is as positive about the menu. Van Dinther, the Volkskrant’s food critic, said that “from a culinary perspective, The Avocado Show has little to offer. It’s basically pieces of avocado with something on the side.” He gave the place 6 points out of 10, “which is not really a recommendation,” he said.

Simpson said the work that goes into making the dishes’ aesthetic, however, is more than a gimmick. It is an integral element of the firm’s marketing strategy, which occurs almost entirely organically on social media.

“The way it works, you give people a spectacular dish, they’re going to take a picture of it and probably share it on Instagram. If it looks good, their friends will come, too,” he said. “That’s basically our advertising strategy in a nutshell.” 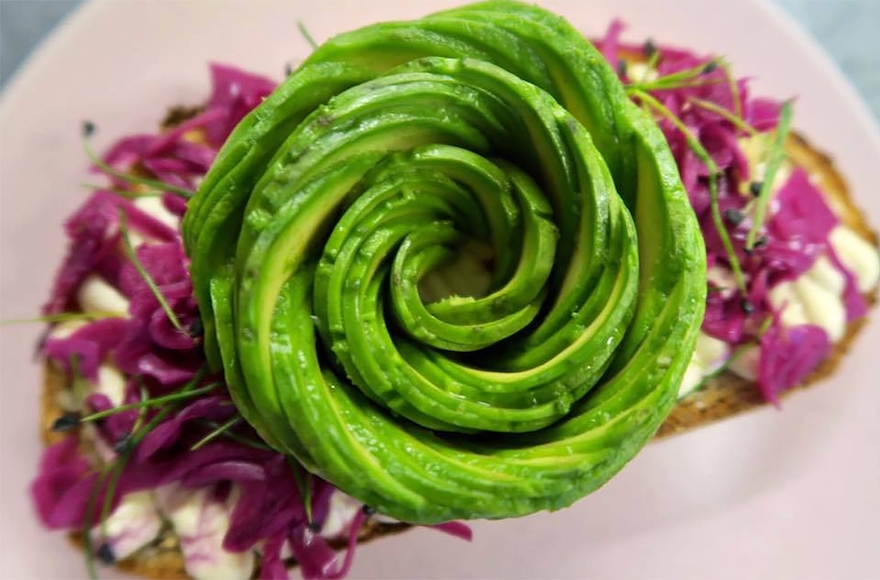 In that sense, The Avocado Show’s success “is a direct result of social media,” Simpson said.

Simpson, a native of the Tel Aviv suburb of Petach Tikvah, is the son of a British father and an Israeli mother. He moved with his two siblings and parents to Holland at the age of 4 because his dad took a job there with AT&T.

Later he would attend college; Simpson says most of his friends from there ended up “very successful, very famous or both.” But for many years he was “kind of figuring out what to do in life,” working in parallel as a journalist and talent agent as well as a barista, waiter “and just about any job you can imagine.”

Being Jewish, Simpson said, “meant that my friends would make fun of how, of course, I’m going to become some famous producer or businessman because there’s this stigma that Jews are good with money, right?”

And while the expectations placed some pressure on Simpson, he said “it also gave me a sort of confidence, I think that, yeah, sure, I can make it in business if I wanted. All I had to do was start.”

From social media, The Avocado Show began making a splash in mainstream media across Europe and beyond. Along with all the articles, the restaurant has been featured on Netherlands TV.

And whereas it may well have been the world’s first all-avocado restaurant, Simpson’s chain is no longer the only one. A month after the opening in Amsterdam, Avocaderia came to Brooklyn — and another location opened this spring in Manhattan. The concept’s popularity is part and parcel of the broader monofood trend, which focuses on one versatile product for a full diet.

Millennials’ passion for avocados was also mocked, and celebrated, last year when an Australian millionaire, Tim Gurner, told an interviewer that young people would be in better financial shape if they spent less money on indulgences like avocado toast.

Simpson said he was moved by instinct, not the trends. He recalled that he and Zaal were talking about opening a restaurant and each made a list of favorite foods.

“Avocado was on both lists, so we went with that,” Simpson said.

The partners came up with the concept and model in under a week in 2016.

“Then we announced it on Facebook and it just took off from there at a speed that, frankly, none of us were prepared for,” he said.

Six months after opening their first restaurant in March 2017, the partners found an investor for going international in Shawn Harris, founder of the leading European exotic fruit and vegetable importer Nature’s Pride. She fronted The Avocado Show $5.7 million, allowing it to open in Brussels and in other cities soon.

“To me,” he said, “it’s a story about two guys who wanted to do something they love and just didn’t spend too much time wondering if it’s actually a good idea.”