Esther is the real queen of the art of the deal

NEW YORK (JTA) – To be a Jew in 2019 is to spend a lot of time grappling with the idea of power. Who has it, who wants it, who is losing it and where do I stand in the midst of it all?

Purim epitomizes the toppling of a power structure. A quiet Jewish girl becomes a power-wielding queen, a mighty anti-Semitic politician is hanged and an entire race of oppressed people is saved.

Though the Purim story is considered miraculous, the name of God is not mentioned in the Megillah. Perhaps it’s because another sort of power — hidden soft power — becomes our secret weapon.

In the Book of Esther, power takes all sorts of forms. There’s plenty of traditional power to be found: King Ahasuerus, the villain of the story, rules over 127 provinces with an iron fist and conniving Haman at his side. Queen Vashti, the royal one by blood and thus the source of Ahasuerus’ kingship, says an emphatic “No!” to being paraded around unclothed when asked (and is ultimately gravely punished for doing so).

And then there is Mordechai, a learned Jew in the kingdom lacking any royal connections, who uses his knowledge and smarts to thwart a plot against the king’s life.

While Vashti may embody to many the ideal of the strong feminist woman by saying no and standing up for herself, she isn’t the only powerful woman in the Purim tale. Queen Esther, the story’s heroine, wields a form of power that is often hard to recognize.

Esther’s power, at once demure and mighty, manifests as sacred vulnerability.

Characterized by radical honesty and empathy, sacred vulnerability can only be tapped into by being open, raw and real. Speaking from this place of awareness takes great courage. But it is this mode of infinite power that saved the Persian Jews.

One reading of soft power might see it as manipulative and surreptitious, but in the story of Esther it is truly the saving grace. Esther’s ability to convince the king of the plight of the Jews is done through a series of parties, through careful consideration of his decision-making methods, and through a deep intuitive ability to put herself out there fully in a quiet but influential way, with sacred vulnerability.

When Esther finds out about Haman’s plot against the Jews, we are told by the writer of the Megillah that the queen was deeply disturbed.

In their conversations, Mordechai entreats her to act immediately and do something bold and risky: Visit the king, in his private chambers, without being summoned, which both know is a capital offense. When Esther reminds Mordechai of this, he gets serious:

“If you are silent at this time,” he warns her, “the people will be saved in some other way. But you – your name will be forgotten forever. Who knows – this could be the reason you are here.”

Esther isn’t asked to make a loud statement or display her power in a Vashti-style move. Rather she is asked to find ways to use her raw courage and honest openness to make real change.

In a society that for so long has been dominated by a masculine form of power that involves aggression, coercion and outward displays of dominance, the power of emotional intelligence and persuasive diplomacy has been devalued. Being vulnerable is often perceived a drawback – in the workplace, in politics and particularly in more traditional Jewish religious contexts. Honesty about one’s challenges are seen as a weakness and a mark against you.

In this world of overt aggression and artfully designed social media posts, we have begun to lose track of our true essence. But our ability to connect with one another relies on using that collective power to make changes in our society.

Brene Brown, a researcher who has spent years exploring ideas around love, connection and self-esteem, extols the virtues of vulnerability as a way to experience true courage and free oneself of shame.

When I came across her teachings, I had lived most of my life in fear of speaking out about the challenges of being a woman in Judaism. I didn’t want to draw attention to my flaws or leave open a space for people to critique me, my family, my practice or my work.

I didn’t want to criticize and destroy; I wanted to be productive and shift paradigms. But I couldn’t imagine ever having the strength to step forward and articulate those truths aloud. I never thought I’d have the strength to strip myself to the bone and be seen as weak.

But slowly, I saw the power in that vulnerability. I started on Facebook, commenting on the plight of agunot — Jewish women whose husbands won’t grant them a divorce — in the Orthodox community. Coincidentally, this cause is closely associated with Queen Esther, celebrated one day before Purim as Agunah Awareness Day. I also was honest with friends about my own struggles in reconciling my Jewish and feminine identities. I shared on InstaStories on my weekly challenges. I started to teach, even when I felt unqualified. And I tell the stories from my own experience without being ashamed to cry.

Although it’s been years, I still quake in that fear sometimes. But the fear ebbs as I realize that my greatest power is revealed through sacred vulnerability.

While we need visionaries at the front line speaking up, sometimes we forget that our greatest power need not be shouted from the rooftops. Having the small conversations, one at a time, with the most important people, can sometimes make the biggest impact.

When Queen Esther was called to save her people, she knew she had nothing to lose. She may have been comfortable in the palace, but that would not have saved her from feeling the pain of her brethren as the Jewish people were on the brink of extinction.

When she did speak out, she insisted on shifting the paradigm to include everyone. Not only would she appear before the king vulnerable and afraid: She would fast for three days and nights, and so would the rest of the Jewish population of Shushan. She would show herself at her physical weakest, knowing that within that sacred vulnerability lay the deepest strength she possessed.

In the first chapter of the Megillah, following Vashti’s banishment, the women of Ahasuerus’ kingdom are all forced to follow the customs of their male partners. Our tradition tells us that this was a perfect setup for the rest of the story.

In today’s world where politicians and religious leaders often silence the experiences of women, female voices are more necessary than ever. And alongside brave Vashtis, we need powerful Esthers, the women who stand in all their vulnerable glory, stepping forward with honesty and rawness to show their true strength. When we tap into soft power, we are able to cultivate relationships, build communities and listen deeply. It is this courage that it is time to embrace, on Purim and at this pivotal moment for our people. 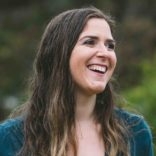 is the founder of TheGene-Sis.com, a movement towards embodying the Jewish experience and feminine spirituality. She is currently studying at the Jewish Theological Seminary in New York.
The views and opinions expressed in this article are those of the author and do not necessarily reflect the views of JTA or its parent company, 70 Faces Media.