(JTA) — Frank Saraceno has worked for ESPN since 1994 and has produced hour-long documentaries on some of the biggest stars in sports for the cable channel’s Emmy Award-winning “E:60” series.

But he thinks working on the episode airing Tuesday night might have been the most powerful experience with the show he has had since its inception in 2007.

“I don’t think I’ve ever been more gratified in terms of the story that I pitched coming to fruition than I am with Shaul Ladany,” Saraceno told the Jewish Telegraphic Agency. “And it’s because of him. It’s all because of him.”

Shaul Ladany, now 86, is a repeated survivor — first of a Nazi bombing of his family’s house when he was a child, then of the Bergen-Belsen concentration camp, and then of the 1972 Munich Olympics terror attack. His “E:60” episode, “The Survivor,” airs at 7:30 p.m. ET, and is pegged to the recent 50th anniversary of the Olympics story.

Though the attack that left 11 Israeli athletes and coaches dead had been chronicled in the 1999 documentary “One Day in September,” narrated by Michael Douglas, and in Steven Spielberg’s 2005 Academy Award-nominated film “Munich,” Saraceno wanted to ensure that the story continued to be told to younger generations.

“The challenge for me was finding a unique way to tell the story,” Saraceno said. “I had an idea. And I said, alright, let me see if there’s anyone, hopefully, with us from the Israeli team, and maybe I’ll start from there. And that’s really what I did. I just looked up every name.”

He stumbled upon Ladany — a race walker who was one of the few Israeli athletes to get out of the Munich Olympic village alive as the attack turned into a nearly-24-hour hostage crisis.

“I pitched it as let’s tell the story of Munich through the eyes of one incredible human being,” Saraceno said.

The film is narrated and reported by Jewish ESPN veteran Jeremy Schaap, who has won 11 Emmys and has covered eight Olympic Games. He is also the author of “Triumph: The Untold Story of Jesse Owens and Hitler’s Olympics.”

“To be there, talking to someone who saw it with his own eyes, who can communicate that story, for me, it was personally meaningful, too, and significant, because I am Jewish,” Schaap told the Jewish Telegraphic Agency.

“When Frank brought [Ladany’s] story to my attention, put us in touch, I said, this is a rare opportunity to tell a story like this,” he added. 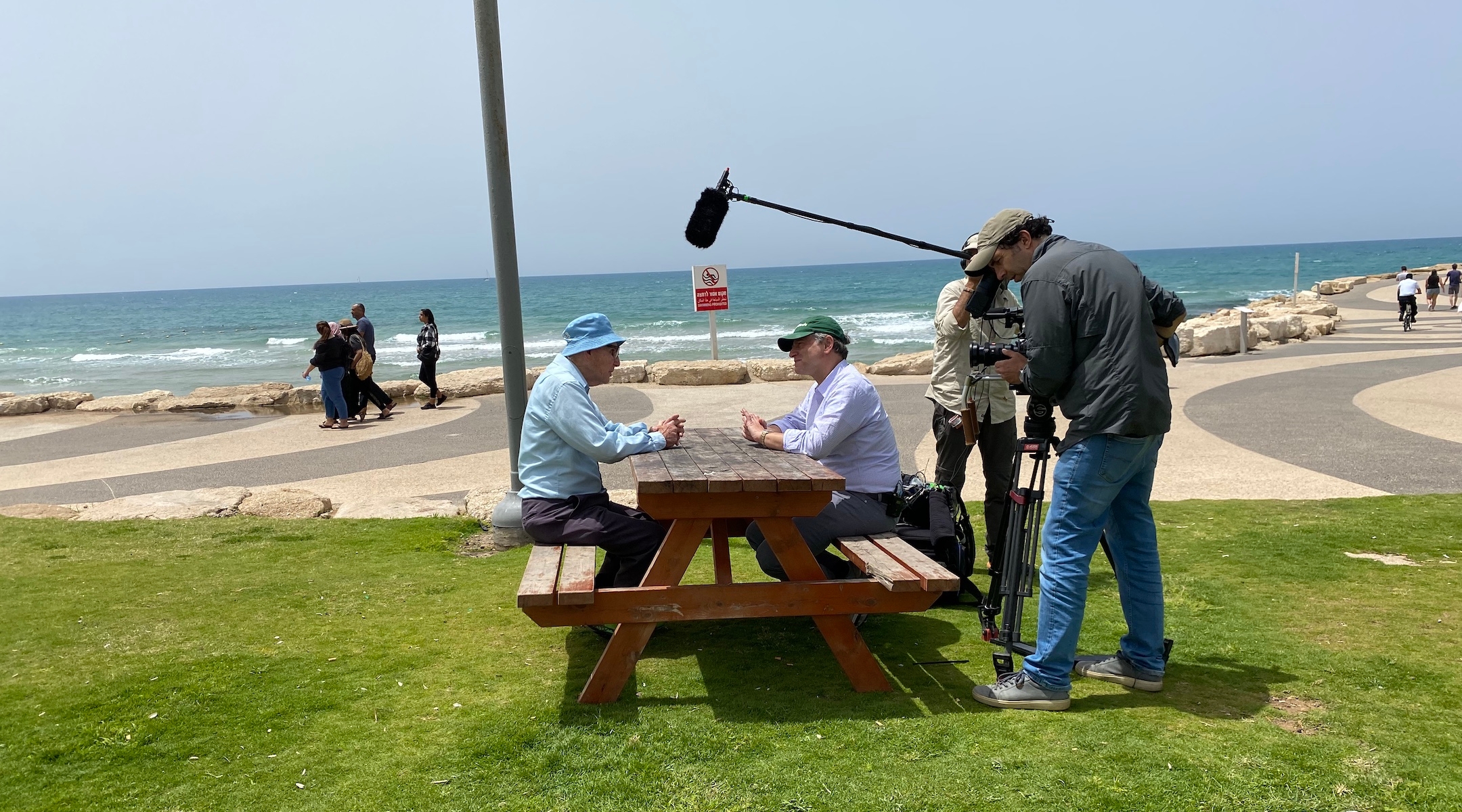 It’s also a story unlike any other he’s ever reported. For one thing, Schaap said it’s the longest interview he’s ever conducted: approximately eight hours.

“In much the way that he has this remarkable endurance physically as a walker, he has, mentally as well as an interviewee,” Schaap said.

Schaap spent time with Ladany at his home in Omer, Israel, in Tel Aviv, and in Germany — including taking a five-and-a-half hour train ride from Bergen-Belsen to Munich, where Ladany attended the German government’s ceremony marking 50 years since the attack.

Though it is timed to that anniversary, “The Survivor” focuses on the survivor himself. It tells the story of Ladany’s family, his journey through the Holocaust, to Israel, and then back to Europe in 1972 for the Olympics. Leaning heavily on archival images and clips from the news and from Ladany’s personal life and athletic career, the episode seamlessly weaves the story together, bringinging the viewer back and forth in time.

Born in Belgrade in 1936, Ladany survived a series of close calls throughout the Holocaust. First, when he was five years old, German forces bombed his family’s home. Then, after the Ladanys fled to Hungary, they were captured by the Nazis in 1944 and sent to the Bergen-Belsen camp, where approximately 50,000 Jews were killed over the course of the war, including Anne Frank.

Ladany was ultimately saved through the Kastner train, a series of cattle cars that brought over 1,600 Jews temporarily to Bergen-Belsen and then to Switzerland after a series of controversial negotiations with Adolf Eichman. Following the conclusion of the war, his family emigrated to Israel, where his athletic career took off. In 1963, he won an Israeli national title in race walking — the first of his 28 — and in the subsequent years would go on to break the U.S. record in the 50-mile-walk. Ladany also competed in the 1968 Olympics and multiple Maccabiah Games.

“You need a certain type of mental attitude: a willingness to take punishment, to have a lack of comfort, and pain, to continue and continue,” Ladany says in a 2012 CNN documentary on the massacre. “I’m not a psychologist, but was I stubborn, so I entered race walking? Or did I enter race walking, and become stubborn? It’s the same in all long-distance events. Quitters don’t win, and winners don’t quit.”

Then, decades after escaping the continent, Ladany returned to Germany as an Olympian, representing Israel. On Sept. 3, 1972, Ladany finished 19th in the 50-kilometer walk. Less than 48 hours later, a group of armed Palestinian terrorists entered the Olympic village quarters of several of his teammates, ultimately taking multiple rooms hostage. Ladany’s room was somehow spared, and he escaped.

“You did not need one lucky event to survive,” Ladany says in the ESPN documentary. “To survive you needed a series of lucky events. Fortunately for me, I had them.” 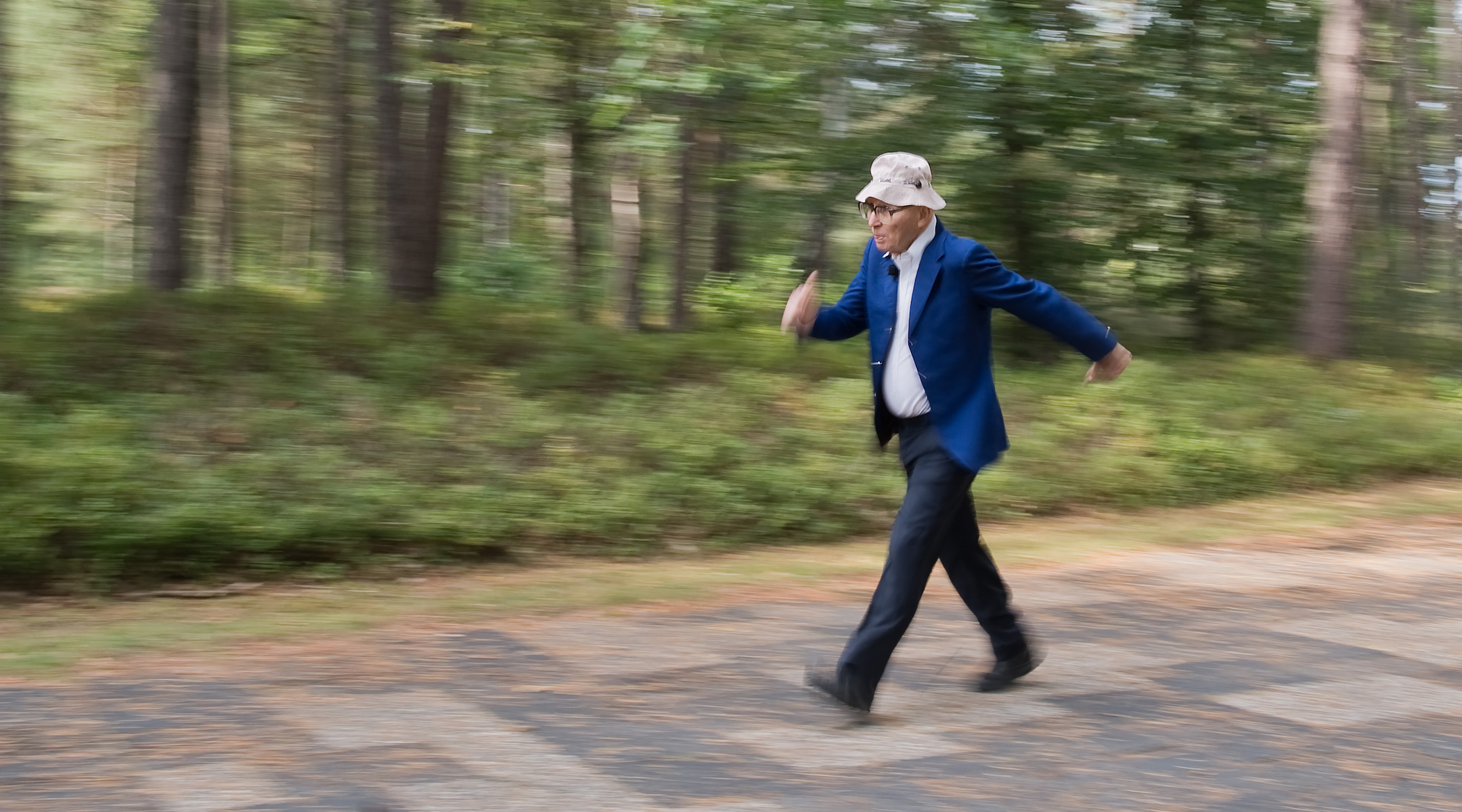 Despite all that Ladany has been through, Schaap said, he does not wear his emotions on his sleeve. In the film, Ladany shares that he is practically incapable of crying.

“Maybe that’s how you survive, right?” Schaap said. “Maybe the way to survive emotionally, through the things that he’s been through, is by internalizing things, and not externalizing them, and certainly that’s what he says when he talks about not being able to cry. There is a stoicism, but not a cynicism.”

Saraceno put together an Israeli crew to film on the ground — partly for Ladany’s comfort. At the same time, he began sifting through countless hours of news coverage from the 1972 Games — transcribing ABC News telecasts, filing and logging archival footage of competitions, opening and closing ceremonies, and Ladany’s personal archives.

“I’m a historian, I’m a sports historian, so I eat this stuff up, I love it,” Saraceno said. “I love getting my hands dirty, so to speak, I love doing all that grunt work.”

The film also features interviews with Israeli photojournalist Shlomo Levy and Olympian Zelig Shtorch, both of whom were at the 1972 Games, as well as Deborah Lipstadt, a noted Holocaust historian and current U.S. antisemitism envoy.

In the decades since the massacre, Ladany became a grandfather and an engineering professor at Ben Gurion University. These days he still walks — but no longer competitively.

As Schaap says in the film, every step Ladany has taken since his childhood has been “an act of defiance.”

“Despite the efforts of so many to eliminate him, to exterminate his people, to attack his team, he’s still here,” said Schaap. “I think the message is that it’s not just about surviving — the title of it’s ‘The Survivor’ — but it’s about how he has responded to these awful things, by living life to its fullest.”

“The Survivor” premieres Tuesday, Sept. 20, on ESPN and ESPN+.