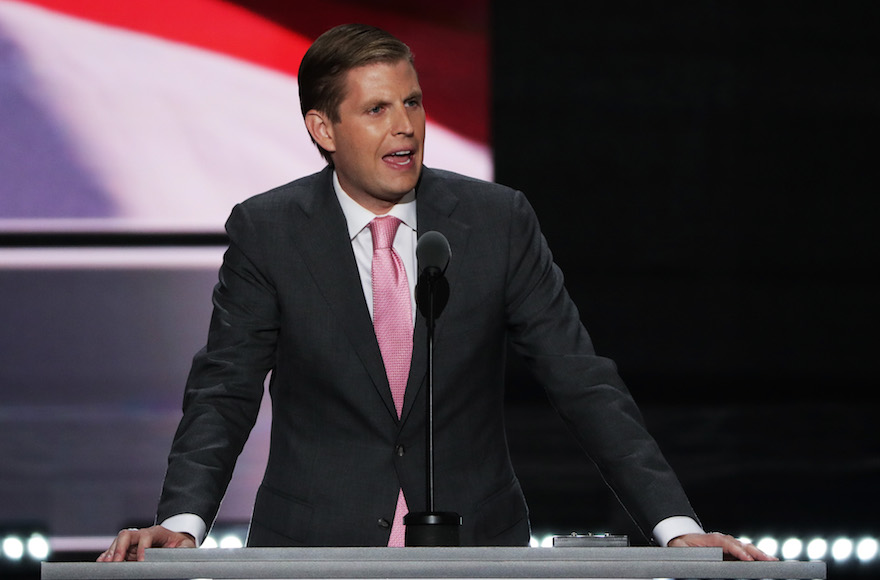 Eric Trump delivering a speech on the third day of the Republican National Convention at the Quicken Loans Arena in Cleveland, July 20, 2016. (Alex Wong/Getty Images)

President Donald Trump’s son made the remarks, which references Israel’s currency, in a Wednesday interview on “Fox & Friends.”

Woodward’s book, “Fear: Trump in the White House,” describes how administration officials work at length to thwart President Trump’s worst impulses, including by removing papers from the president’s desk behind his back. The book quotes anonymous sources.

“But don’t you think people look through the fact that you can write some sensational nonsense book? CNN will definitely have you on there because they love to trash the president,” Eric Trump said.

ERIC TRUMP attacks Democrats: "Anti-law enforcement, high taxes, and elimination of plastic straws is not a message that will win in November."

The modern Israeli currency is named after currency referenced in the Bible. Shekels is also an American and Irish term slang for money, showing up in old potboilers like Mickey Spillane’s “I, The Jury”: “Generally a runner made plenty for himself, taking a chance that the dough he clipped wasn’t on the number that pulled in the shekels.”

But on some anti-Semitic corners of the web, like the anti-Semitic site The Daily Stormer, it is often used sarcastically to refer to Jewish greed or influence.

Some Twitter users were quick to criticize Trump for using the term.

“Outrageous. If you want to see how the neo-Nazis use the term ‘shekels’ take a quick glance at The Daily Stormer. Eric Trump’s ‘three extra shekels’ attack on Bob Woodward is not some accident any more than Hillary Clinton’s image over a Star of David,” tweeted Jonathan Weisman, the deputy Washington editor of The New York Times and the author of a recent book on anti-Semitism.

The Trump presidential campaign was criticized in 2016 for sharing a meme superimposing Hillary Clinton over a pile of money and a Jewish star. Woodward is not Jewish.

“Eric Trump said this morning that Bob Woodward made ‘three extra shekels at the behest of the American people’ with his book. Is Eric too stupid to know he’s being anti-Semitic?” tweeted Bill Kristol, editor at large at The Weekly Standard.