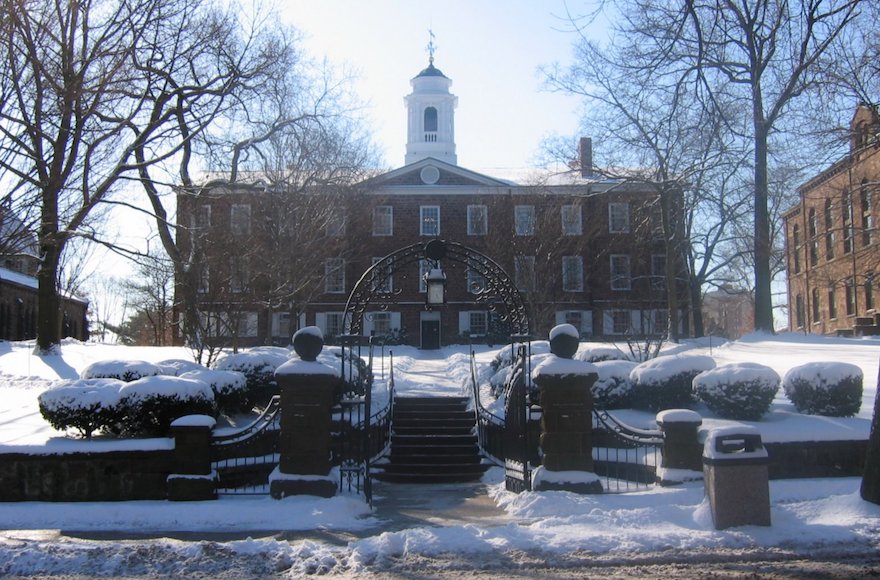 NEW YORK (JTA) — An investigation into an allegedly anti-Semitic incident at Rutgers University is being reopened by the U.S. Department of Education’s Office for Civil Rights.

Kenneth Marcus, the department’s new assistant secretary for civil rights, wrote in a letter last week that a pro-Palestinian event at the New Jersey state school in January 2011 may have discriminated against Jewish students by charging them admission while allowing others in for free.

The new investigation, responding to a complaint originally made by the Zionist Organization of America in 2011, will also look into whether students at the university currently experience anti-Semitism.

In reopening the Rutgers probe, Marcus employed the State Department’s definition of anti-Semitism, which includes some types of anti-Israel activity, like holding Jews collectively responsible for Israel’s actions. The definition was composed by the International Holocaust Remembrance Alliance.

Susan Tuchman, director of the ZOA’s Center for Law and Justice, sees that as an important precedent.

Title VI of the Civil Rights Act prohibits discrimination based on national origin.

The investigation stems from a ZOA complaint filed in 2011 alleging that organizers’ actions at the pro-Palestinian event that year at Rutgers constituted anti-Semitism, and that Jewish students’ civil rights were violated because the school did not appropriately address the anti-Semitism. The complaint also alleged that Jewish students were harassed and physically threatened on other occasions.

In 2014, the Office for Civil Rights dismissed the complaint, and until last week did not respond to an appeal filed shortly afterward by ZOA. But on Aug. 27, Marcus reopened the investigation into the event.

The event in question was sponsored by Belief Awareness Knowledge and Action, a pro-Palestinian group, and was called “Never Again for Anyone.” It sought to expand the Holocaust remembrance slogan to also refer to other offenses, including Israeli abuses of the Palestinians. At a certain point, organizers began charging a $5 admission fee.

According to ZOA, the event was advertised as free and open to the public, but organizers began charging Jewish students $5 after a large group of them showed up. ZOA pointed to an email sent by an event organizer saying that “We need to start charging because 150 Zionists just showed up!” but that “if someone looks like a supporter, they can get in for free.”

The Office for Civil Rights initially did not consider the email as evidence because it had been redacted, so it dismissed the complaint. In a 2014 letter, it said there was no evidence that only Jews were charged admission, or that others got in for free unfairly.

“OCR did not find sufficient evidence to substantiate that any individuals were treated differently, based on national origin, with respect to imposition of the admission fee,” read a 2014 letter from the office to ZOA.

Palestine Legal, a group that advocates on behalf of pro-Palestinian students, said in a 2014 statement that the ruling that year from the Office of Civil Rights, in addition to dismissals of three similar complaints at other schools, showed that pro-Palestinian activism was a legitimate exercise of free speech.

“The rulings on all four complaints confirms the obvious – that political activity advocating for Palestinian human rights does not violate the civil rights of Jewish students who find such criticism offensive, and that, to the contrary, colleges and universities have an obligation to create an environment that supports freedom of expression,” the statement said.

But Marcus wrote that the student’s email from the 2011 event should be considered, and that it may point to discrimination against Jewish students.

“In other words, the visual perception of a group of ‘150 Zionists’ referenced in the email could have been rooted in a perception of Jewish ancestry or ethnic characteristics common to the group,” Marcus wrote, adding that it was unlikely organizers polled each of the 150 entrants on their views regarding Israel. “In cases such as this, it is important to determine whether terms such as ‘Zionist’ are actually code for ‘Jewish.’”

The letter also noted that some students who reported being charged had a Jewish appearance (like wearing a yarmulke, for example).

Marcus wrote that due to these considerations, the office was reopening the investigation into whether the event was anti-Semitic. The investigation will focus only on evidence already collected, so former students will not be interviewed again.

“With respect to reassessing the record, that’s the record, and I don’t believe we can add anything to that,” Tuchman said.

The renewed investigation comes some three months after Marcus was confirmed to his position by the Senate.

Before taking the position, Marcus was at the forefront of efforts to combat Israel boycotts on campus and anti-Semitic harassment through enforcement of civil rights powers. ZOA, Hillel International and other Jewish organizations supported his nomination, though women’s rights groups including the National Council of Jewish Women opposed the choice because Marcus supported rolling back Obama-era guidelines on how colleges should handle sexual assault.

Pro-Palestinian groups, meanwhile, warned that Marcus would wield the law to silence criticism of Israel on campus.