Donald Trump and Benjamin Netanyahu can’t get enough of each other. Here’s why. 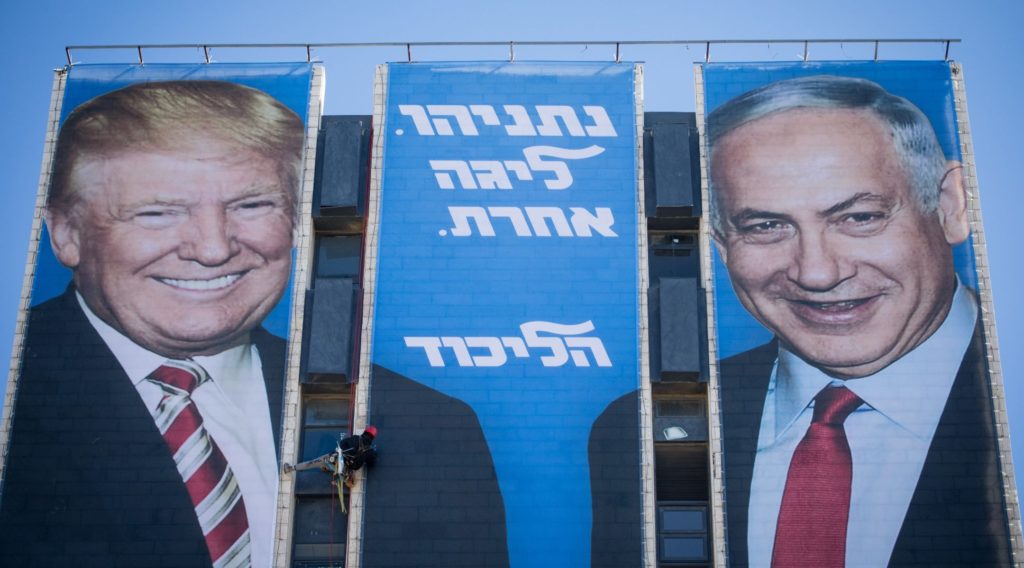 (JTA) — The Trump-Netanyahu alliance that both want you to see can be found in campaign posters in Israel: They feature the president of the United States and the prime minister of Israel in a warm handshake. The slogan reads, “Netanyahu, in a different league.”

But the two are courting comparisons that flatter neither: In the same week that Donald Trump was described as a cheat, con man and racist by his former fixer Michael Cohen, Netanyahu learned that Israel’s attorney general intended to seek his indictment for bribery, fraud and breach of trust.

The week of terrible, horrible, no good, very bad news appears to place the two leaders in a league of their own. But the two are hardly running away from each other.

Asked about the Netanyahu corruption charges at a news conference in Hanoi, during his summit with North Korean leader Kim Jong Un, Trump replied, “He’s tough, he’s smart, he’s strong.” Added Trump: “He is very defensive. His military has been built up a lot. They buy a lot of equipment from the United States, and they pay for it.”

Netanyahu in turn seized on Trump’s generous assessment in his own angry, emotional defense Thursday night, delivered live on prime time television: “When I returned to Israel I heard this morning the words of support for me by U.S. President Donald Trump. He praised, and I quote, my strong, intelligent and resolute leadership of the State of Israel. I thank my friend, President Trump, for his remarks.”

Added Netanyahu: “That unique relationship with the leaders of the world powers isn’t a trifling matter. It isn’t self-evident. I’ve been building it for many years, and it has helped me ensure our security and our future. It’s helped me safeguard our country.”

It should also be noted that he also spoke warmly of his “friend,” Russian president Vladimir Putin, with whom he met earlier in the week.

Americans who disdain both Trump and Putin — and fret the relationship between Trump and Putin — might find it odd that Netanyahu would call the pair as character witnesses. But Netanyahu’s message was meant for an Israeli audience, not a global one. Here’s how David Halbfinger of the New York Times imagined the subtext of Netanyahu’s remarks: “The presidents of the United States and Russia are my friends, and no one running against me can say that. It’s taken me years to build those relationships. Don’t throw them away. I am keeping you safe.”

Similarly, Trump has strong domestic interests in holding Netanyahu close (besides his own personal tendency to love anyone who loves him back). Peeling pro-Israel voters and donors away from the Democratic Party has become a loud and early theme of the run-up to the 2020 elections among Republicans. The party’s efforts range from parliamentary maneuvering to holding all Democrats responsible for the latest anti-Israel outrages from House backbenchers like Ilhan Omar and Rashida Tlaib.

Longtime Mideast hand Aaron David Miller put it this way in Politico: “Netanyahu — a charismatic native English speaker who is revered on the American right for his fervent opposition to Barack Obama and his nuclear deal with Iran — is all too willing to be a political asset for Trump. And making the Republican Party the champion of Israel, particularly given the divisions among the Democrats, is smart politics.”

Outside of pro-Israel politics and Jewish communal concerns, some saw a silver lining in week in which the leaders of the United States and Israel were both alleged to have subverted the rule of law. While Sen. Elizabeth Warren (D-Mass.) was denouncing Netanyahu for delivering a “cut to the heart of a functioning democracy,” others noted that Cohen’s House testimony and Netanyahu’s pending indictment showed two healthy democracies exercising their abilities to check their executive branches.

“[T]he fact that both countries have major problems doesn’t mean they’re doomed,” Zack Beauchamp wrote in Vox. “The past week has shown that in both the United States and Israel, key parts of the democratic systems are functioning in exactly the way they’re supposed to — as antibodies targeting an anti-democratic infection. Whether this will be enough in the long run is still very much an open question.”

Netanyahu is due in Washington later this month to address the American Israel Public Affairs Committee. It’s a fraught time, and not just because of Netanyahu’s legal woes.

AIPAC implicitly denounced the deal Netanyahu made to pull an extremist right-wing party into his camp ahead of the April elections. He will no doubt meet with Trump while in Washington. AIPAC faithful are happy to celebrate a president and prime minister who can’t seem to get enough of each other. But most American Jews can’t abide Trump, and aren’t exactly on board with Netanyahu.

And just as the most fervently pro-Israel voter is worried about a Democratic drift away from Israel, even centrists worry about the future of U.S.-Israel relations if support for Israel and support for Trump and his party are seen as synonymous.