Digging through the charred wreckage of the Carlebach moshav

MEVO MODIIN, Israel (JTA) — “It’s an apocalypse,” Zelda Burkey, 63, blurted out in a piercing voice as we walked through the charred remains of the once beautiful Moshav Mevo Modiin. “It’s total desolation.”

Late last month, Israel was on high alert following a national outbreak of wildfires caused by excessively hot and dry weather. More than 1,000 fires would blaze throughout the country, but none with the fury that razed this cooperative village 30 minutes southwest of Tel Aviv.

Popularly known as the Carlebach Moshav, Mevo Modiin was founded more than 40 years ago by the late American rabbi and songwriter Shlomo Carlebach and quickly because known as a haven for Orthodox musicians, artists and religious free spirits.

Burkey, an English teacher originally from Brooklyn, has been here, living in the same house, almost since the beginning.

That house used to be a haven for soldiers without family in Israel, gap-year students and those going through hard times. Today the house is a shell. Returning to her home for the first time since the blaze in the company of a Jewish Telegraphic Agency reporter, Burkey worked hard to maintain her composure, sifting through what remained of her possessions.

A thick layer of ash, melted glass and metal fragments coated the floor of Burkey’s house as she picked her way through the wreckage, exclaiming when she came across the remains of particularly important or sentimental items.

“I had one of the most beautiful gardens,” she said. “I have pictures of it I can show you. [Here were] my flowers, this is my plastic table, my pool, my lemon tree, there was a gorgeous round wood table there.”

Israel’s Fire and Rescue Service initially blamed the blaze in Mevo Modiin on faulty electric wires, but has since suspected arson. The fire destroyed at least 40 of the community’s 50 homes. Also scorched were nearly 2,000 acres of national park and public land.

Moshav members have vowed to rebuild. The Jewish Agency for Israel and Jewish Federations of North America said they will offer immediate emergency assistance to the 60 families in Mevo Modiin and another community, Kibbutz Harel, whose homes were destroyed. The International Fellowship of Christians and Jews said it will provide up to $5,000 in assistance for each family.

But even if the community rises from the ashes, Burkey will always know what has been lost. 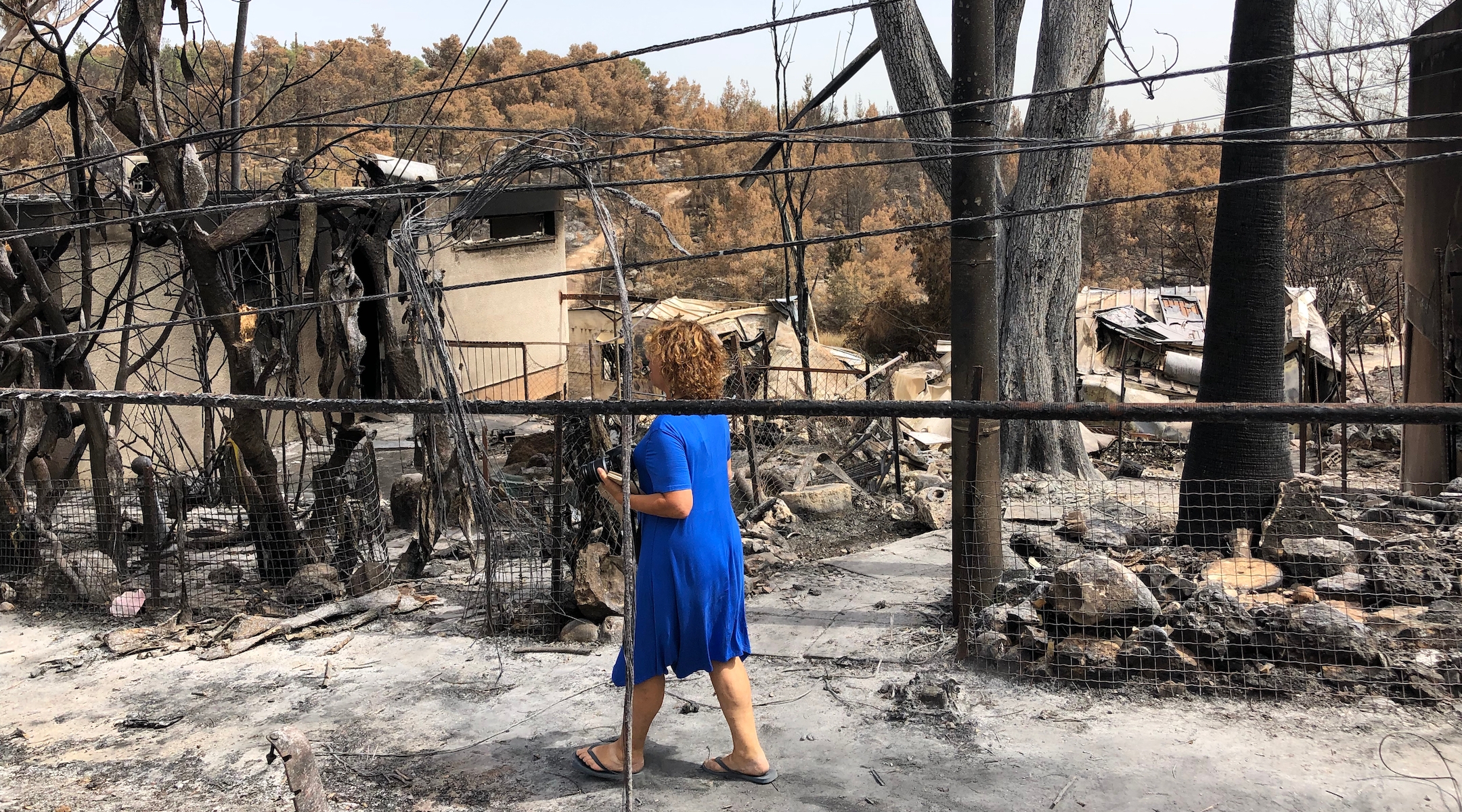 The blaze at Mevo Modiin destroyed at least 40 out of the community’s 50 homes, and scorched nearly 2,000 acres of national park and public land. (Sam Sokol)

Wearing a simple blue dress and sandals, her face smudged with soot, she bent over and picked up an almost unrecognizable item.

“This is my wedding china and this is my parents’ wedding china [and] this was my great-grandfather and grandmothers’ silver that they brought from Europe to America,” Burkey said. “I had pictures, a hundred years old, that hung on this wall but you know what, at least the people survived.”

The fire happened on the same day as the minor Jewish festival of Lag b’Omer, and revelers were warned not to light the bonfires that usually mark the day. Burkey said her children were at home.

“My daughter called me and said she saw smoke,” she recalled, “and I went up to the roof as I usually do when there is a fire.”

After informing the fire department, Burkey returned to the roof. Someone on the street screamed for everyone to evacuate the moshav. She repeated the call and then came down. The fire had not yet reached the first houses but was approaching fast. Residents had been instructed to make their way to the front gate.

“We figured the firemen were going to come in, like they’ve always done before, to fight the fire, that [firefighting] planes would come. [So] my thought wasn’t to take the Torah or any important papers, my thought was to take the living things in the house,” she told JTA.

Stuffing her grandkids and dog in the car, Burkey rushed to the front gate, where they were instructed to make their way to a local, air-conditioned mall. However, Burkey was unable to enter with her pet and decided to climb a nearby hill to watch the fire.

“I photographed the whole thing and watched my house burn. Once I saw the roof go …,” she trailed off.

Burkey, who is an amateur photographer, has posted daily updates to social media detailing her neighbors’ displacement. For a reporter, she points out what once was.

”Here there were years and years and years of photo albums,” Burkey said, entering a room in her former house whose floor was covered by a thick layer of paper charred beyond recognition. “I came to see if something from my albums survived, but this is the first time I’m here and there’s just nothing.”

Over the years, a flood of young people stayed at the house, which served as a sort of unofficial home for the indigent and troubled, said Barak Schechter, 40, who was taken in by Burkey when he was 17 and “totally lost in life.” Today he is a tour operator and community activist in Beit Shemesh.

“Thousands of people passed through,” Schechter recalled. “It was unbelievable.”

For her part, rather than feel sorry for herself, Burkey saved much of her sorrow for others, lamenting that a house guest who had been staying in one of her extra bedrooms following a divorce had lost all of his possessions. 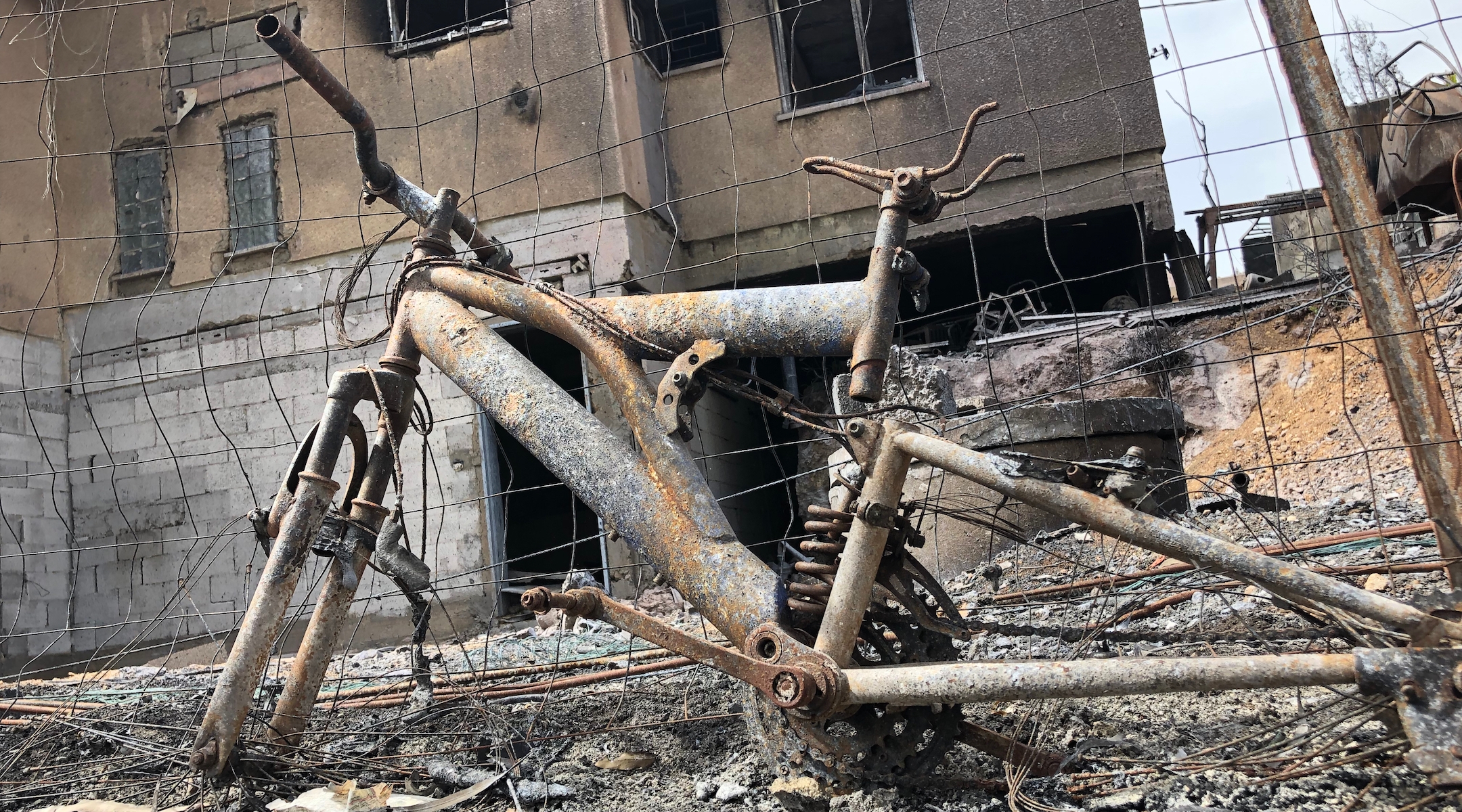 No one was killed or hurt in the fire at Mevo Modiin, but everyone lost “memories.” (Sam Sokol)

She largely kept her calm until, on the second floor of the burnt-out shell of her house, she came across markings on the wall showing the heights of her children at various ages, topped by a line with the name of her late husband. Her voice starting to crack, she hugged the wall.

“I can feel his height and all my kids,” she said in a low voice.

Leaving her house, she ran into several other residents who had arrived to pick through the wreckage of the now-abandoned town, greeting them warmly and smiling.

“Everyone is alive and everyone is unscathed,” she said before getting into her car to go to her temporary digs at Kibbutz Chofetz Chaim. Even though she does not have home insurance, she still expects to return and rebuild.

“I lost memories, I lost my home. But you know what, when I look around and I see no one was killed [and] no one was hurt, I remember the  Carmel fire, with the people burning in a bus [and] all I can say is thank God we will go out and we will rebuild it again,” she said.

In 2010, 38 passengers died when a fire in the northern Carmel Forest engulfed the bus in which they were traveling.

“We are a people who will come out of the fire stronger than we went into it,” Burkey said. “We’re coming back. We’re gonna rebuild, we’re going to make it better and stronger. This is our home.”