Deportation of Nazi ignites a fight between right and left. You’re surprised? 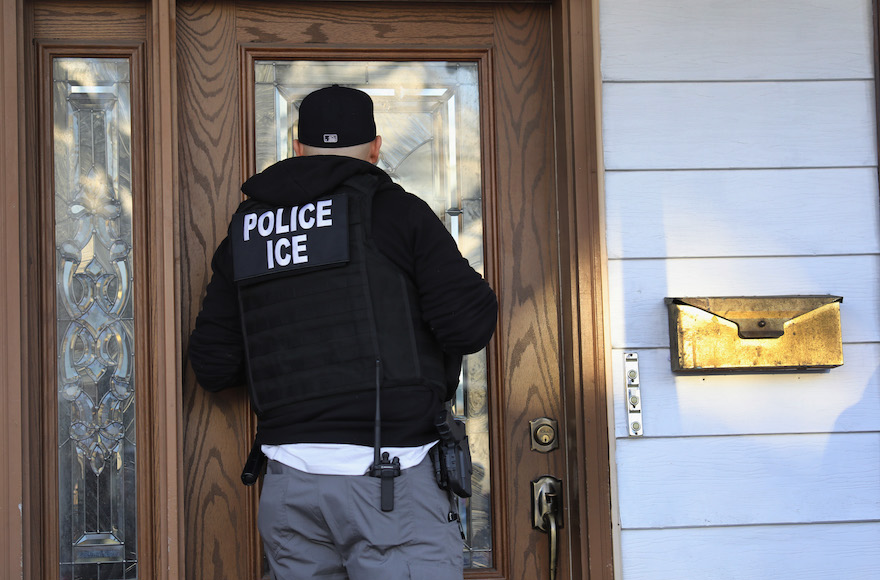 (JTA) — In the Trump era, even the deporting of Nazis can’t bring Americans together.

A number of Jewish organizations and lawmakers were quick to thank the Trump administration for deporting Jakiw Palij, a former SS guard at the Nazis’ Trawnicki concentration camp in Poland.

But they weren’t as quick as the administration itself, whose news release Monday announcing the deportation was explicit in commending President Donald Trump for making Palij’s expulsion a priority while noting that “past administrations were unsuccessful in removing Palij.”

Presidents are seldom shy in taking credit where credit is due, and in this case it is certainly due: Palij lied about his Nazi past when he entered the country in 1949 and became a citizen in 1957. He later admitted that he was trained by the SS and served as an armed guard at the adjacent Trawniki forced-labor camp, where Jews were shot en masse (Trawniki’s functions shifted over the course of the war). Even if his role was only to prevent their escape, that constitutes a war crime.

ABC News reported that Trump told U.S. Ambassador to Germany Richard Grenell to make Palij’s deportation “his No. 1 priority when he got to Berlin,” which had to agree to take the deportee.

But nothing escapes politicization in these polarized times, and Monday’s announcement was no exception. Critics of Immigration and Customs Enforcement pointed out that the announcement arrived only hours after a special ceremony at the White House honoring the agency. These critics said the timing was intended to deflect the intense scrutiny of the agency’s aggressive tactics in removing undocumented immigrants, regardless of their criminal records. Some Democrats have called for abolishing ICE and refocusing immigration enforcement efforts on undocumented immigrants who come to the attention of law enforcement.

“My father denaturalized and deported Nazis for a living and he didn’t need a xenophobic goon squad to do it,” tweeted BuzzFeed reporter Joe Bernstein, whose father, Mike, served as assistant deputy director of the Office of Special Investigations, the Justice Department’s Nazi-hunting unit. “The men and women of OSI would be disgusted by using deportations as a political stunt.”

“Palij’s deportation was ordered in 2004, the hold-up had to do with him being stateless, and past admins removed dozens of original Nazis, all of whom are now very old or dead,” journalist Jonathan M. Katz tweeted.

“[I]t is not hard to see a malign political motive in the White House’s press campaign surrounding the deportation,” Josh Marshall of the liberal Talking Points Memo wrote.

Republican’s seized on the Palij announcement, meanwhile, to defend the agency and the president.

“Thank you ⁦@ICEgov⁩ for apprehending an ACTUAL Nazi & deporting him. This would be a good occasion for radical Democrats to reconsider their ill-advised attacks [on] brave ⁦@ICEgov⁩ officers,” tweeted Sen. Tom Cotton, R-Ark., one of ICE’s most outspoken proponents in the Senate. His use of “ACTUAL” presumably referred to some left-wing attacks comparing ICE officers to Nazis.

“ICE deports White Nazi? I thought they were white supremacists? Facts can be stubborn things,” he tweeted.

James Hasson, a law student and frequent contributor to the conservative media, tweeted: “ICE arresting and deporting an actual Nazi labor camp guard seems a tad inconvenient for the whole ‘ICE is a bunch of literal Nazis’ narrative.”

Beyond the political scorekeeping, some observers sought to make some substantive points.

Marshall also wanted to talk policy, not politics, specifically about whether aggressive attempts to strip the citizenship of naturalized citizens violate a tradition that treats all citizens the same.

“Few of us would disagree that former Nazis who participated in war crimes should not be given refuge or citizenship in the US,” Marshall wrote. “But denaturalization is extreme and fraught device which should be employed only in the most extreme circumstances.”

Whether you agree or not, Marshall’s argument can’t be reduced to a tweet. So it is unlikely that anyone will pay attention.

The post Deportation of Nazi ignites a fight between right and left. You’re surprised? appeared first on Jewish Telegraphic Agency.