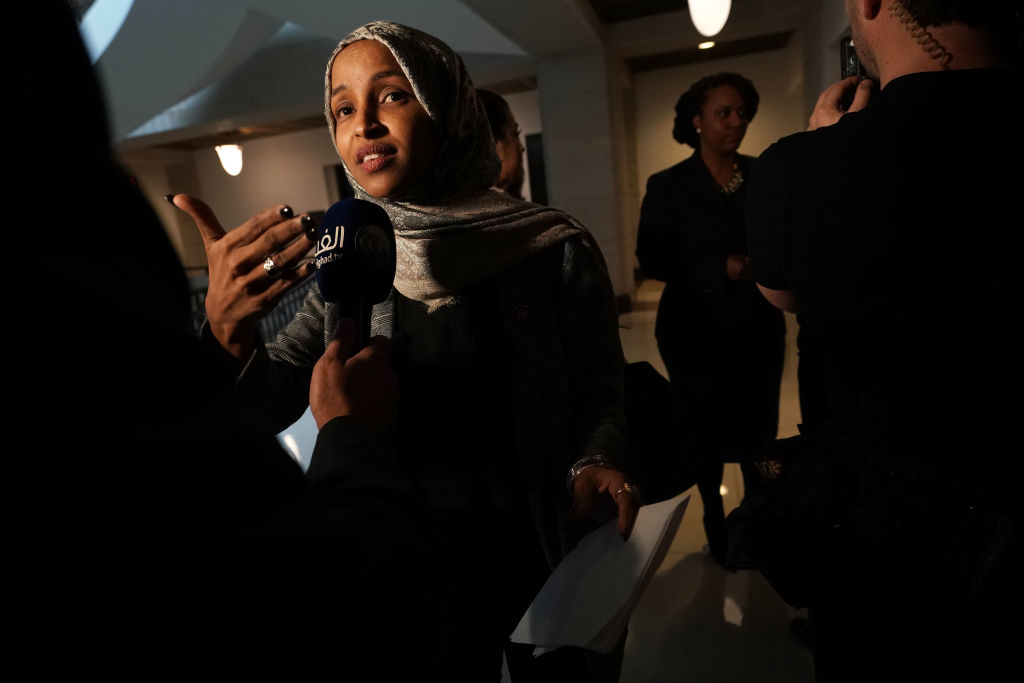 WASHINGTON (JTA) — Democrats reportedly are working on a new resolution condemning anti-Semitism after members of the party’s black and progressive House caucuses complained that it appeared to single out Rep. Ilhan Omar.

Multiple reports said there were emotional exchanges Wednesday at a closed caucus meeting, with Jewish members who advanced the resolution, including Rep. Ted Deutch, D-Fla., saying that Omar’s recent claim that she felt pressure to pledge “allegiance” to Israel was hurtful.

Omar, a freshman Democrat from Minnesota, did not speak, but her defenders said she was being singled out at a time of attacks on other minorities. The same weekend that Omar got into a Twitter fight with Rep. Nita Lowey, D-N.Y., a Jewish member of the leadership, over her recent “allegiance” comment, a West Virginia Republican event included material that likened Omar to the 9/11 terrorist attacks. Republicans later denounced the comparison.

Rep. Ayanna Pressley, D-Mass., like Omar a freshman, told The New York Times that the resolution, which was supposed to be voted on Thursday,  should include Islamophobia in its condemnation.

“We need to denounce all forms of hate,” she said. “There is no hierarchy of hurt.”

Rep. Nancy Pelosi, D-Calif., who attended the meeting, said she is ready to reconsider the resolution, according to the reports. Pelosi helped draft the resolution with her whip, Rep. Steny Hoyer, D-Md., and leading Jewish Democrats, including Deutch, Lowey, and Rep. Eliot Engel of New York.

The resolution as it stands condemns the “dual loyalty” trope Omar invoked, but also condemns tropes that Democrats have accused leading Republicans of peddling, including the slander that rich Jews buy political favors.

A Washington Examiner reporter said on Twitter that Engel’s committee will draft the revised resolution. Omar is a member of the committee, and Engel, while he has publicly rebuked Omar, has said he will not call for her to leave the influential panel.

Sen. Bernie Sanders, I-Vt., who is running for president on the Democratic ticket, spoke out against the resolution.

“What I fear is going on in the House now is an effort to target Congresswoman Omar as a way of stifling that debate,” Sanders, who is Jewish, said Wednesday in a statement. “That’s wrong.”

“Like some of my colleagues in the Congressional Black Caucus, I am concerned that the spotlight being put on Congresswoman Omar may put her at risk,” Harris said in a statement. She added: “You can both support Israel and be loyal to our country.”

Much of the fury comes from progressives who say that Democrats are eating their own at a time when Republicans have not done enough to confront bias in their ranks. They note that while Rep. Steve King, R-Iowa, was penalized in January for statements supporting white supremacists, he had made such statements for a decade.

They also want President Donald Trump held to account for statements against Muslims and Hispanics that are seen as baiting blacks and condoning white supremacists, and allegations of past assaults of women.

Trump seized on the rift, tweeting Wednesday, “It is shameful that House Democrats won’t take a stronger stand against Anti-Semitism in their conference. Anti-Semitism has fueled atrocities throughout history and it’s inconceivable they will not act to condemn it!”

Trump was similarly accused of not taking a stronger stance against anti-Semitism and white supremacy after a neo-Nazi march in Charlottesville, Virginia, that ended with deadly violence.

More recently, he has condemned anti-Semitism, last month devoting a chunk of his State of the Union speech to the issue.