Plenty of the candidates are out and proud about their Jewishness and even say that they are motivated by Jewish values or experiences. But in other cases it was hard to tell whether a candidate should make the cut. Here was my process: I stuck to Democrats and Republicans to keep it real (although Jews seem overrepresented among Libertarians, which is a story I promise I’ll get to one day).

I compiled a list of all 950 or so nominees and tried to pick out clues in names, campaign bios and policies. More often than not I came up with the goods, but I occasionally would have to reach out to a campaign to make sure. Synagogue membership, which Christine Bubser, running in southeastern California, boasted, was not enough: I called her campaign and confirmed that she is Jewish (and also the designated shofar blower at her shul). Once I was satisfied, I ran my lists past a bunch of people who are steeped in Jewish knowledge of both parties asking if I was missing anyone.

My sources said I had gotten it, but did we miss anyone? It’s possible. Mike Siegel, running in Texas, appears to identify as Jewish and as Protestant — check out the immigration page on his website, and his interview with Jewish Insider. Identifying as both Jewish and Christian is not an unknown phenomenon, but I wanted to know more before including him. Unfortunately, his campaign did not return requests for comment.

You’re invited: We’re going to be watching the polls Tuesday night and will send out login information on Monday in case you want to join. For now: Respond to this email to let us know what you want from JTA on Election Day? Drop us a line at thetell@jta.org.

In another case, post-publication, an astute reader alerted me to Dana Barrett, running as a challenger in Atlanta’s northern suburbs and exurbs. I wish I’d known earlier, because she’s fascinating: Before she started running, she was a talk radio figure who is Jewish and liberal, and I don’t know if there are a lot of those. Also, her show’s tagline is begging for an explanation: “It’s salty, it’s got bite and it’s better than a two-martini lunch.” (Barrett is now in. So, after this election is done, is the two martini lunch, as far as I’m concerned.)

Here are some instances when being Jewish and running office intersected in fun and telling ways:

Elaine Luria, the Virginia Democrat defending her incumbency in a conservative district, who has faced sharp criticism from some constituents when she changed her mind about impeaching President Donald Trump. The Navy veteran found solace in her faith and particularly in the white Hebrew Bible she got at her confirmation at a Birmingham, Alabama, temple.

Dean Phillips brought to the House floor his memory of being an awestruck child when he met a Jewish sportswriter venerated in the Twin Cities.

David Kustoff, the Tennessee Republican, was heartened when evangelical Christians in his district were thrilled to discover that he is Jewish.

Eric Early, the Republican mounting a quixotic challenge against Adam Schiff in his California district, is a veteran of 1980s children’s television production and scripted episodes of “Jem and the Holograms.”

Besides the Schiff-Early race, there are four races where Jewish challengers are facing Jewish incumbents, and those, I’ve found, throw into relief the split between the majority of Jewish voters who are liberal and revile what they see as Trump’s bigotry and the minority who embrace Trump as a savior, or at least the best leader to achieve their policy goals.

The perfect encapsulation of that tension came in a debate this month in Pennsylvania’s Lehigh Valley, where there are fewer than 10,000 Jews, but where both candidates are Jewish: Susan Wild, the incumbent Democrat, and Lisa Scheller, her GOP challenger, who has made the Democratic drift from pro-Israel orthodoxy an issue.

During the debate sponsored by the Jewish Forum of Lehigh Valley, Wild agreed that Israel’s security was a critical issue, and rejected the movement to boycott, divest from and sanction Israel, but she pivoted to the threat posed by white nationalism. “The guards at our synagogues, they’re not there to protect us from BDS supporters, though I do condemn that movement,” she said. “They are there to protect us from the violent, right-wing extremists who murdered Jews at the Tree of Life synagogue.”

Dive into the breakdowns of the races: Here are the Senate candidates; the Republicans; the incumbent Democrats; and the Democratic challengers.

We’ll sit in the dark: Are Jews anxious? Is that a question? In an election season? My colleague Uri Heilman has the answers.

The minyan he wouldn’t join: We know that Orthodox Jews overwhelmingly support Trump’s reelection. My colleague Shira Hanau travels to New York rallies and discovers there are differences among pro-Trump Jews. And here’s a story from our partners at the New York Jewish Week about an Orthodox rabbi in Queens who is openly supporting Biden, even though that puts him at odds with much of his community.

Miller time: Stephen Miller, the senior adviser to Donald Trump, is reportedly preparing for a possible second Trump term by readying executive orders that would further curb immigration, including zeroing out refugee admissions. He also made a QAnon-esque allegation against Biden this week. The ADL this week asked both parties to eject candidates who believe in QAnon, an explicitly pro-Trump theory. 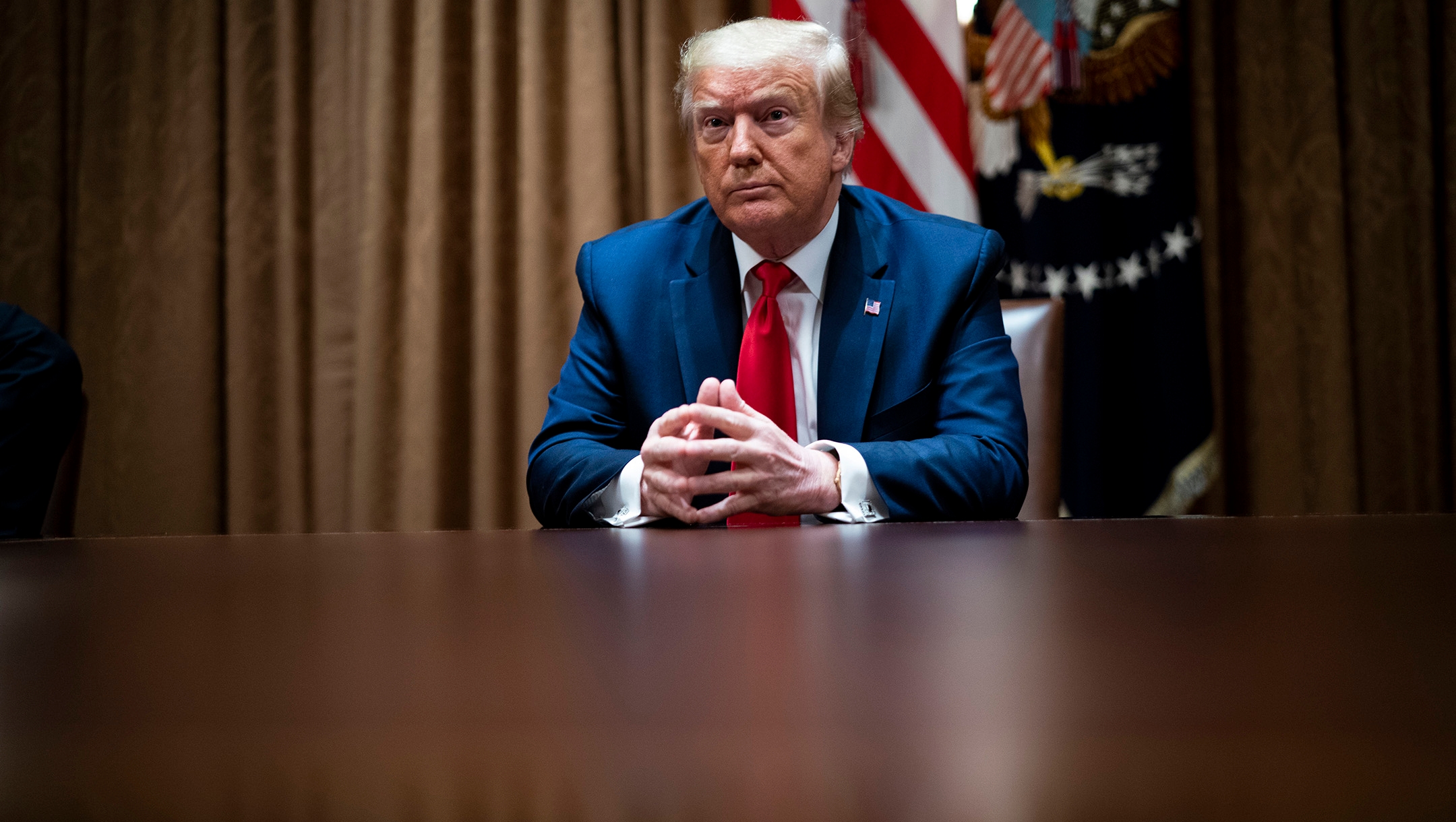 The Trump administration has enforced tough sanctions on parties dealing with Iran. Why did its Justice Department seek to frustrate investigations into alleged Turkish violations? The New York Times’ Benjamin Weiser and Eric Lipton lay out the contradictions. 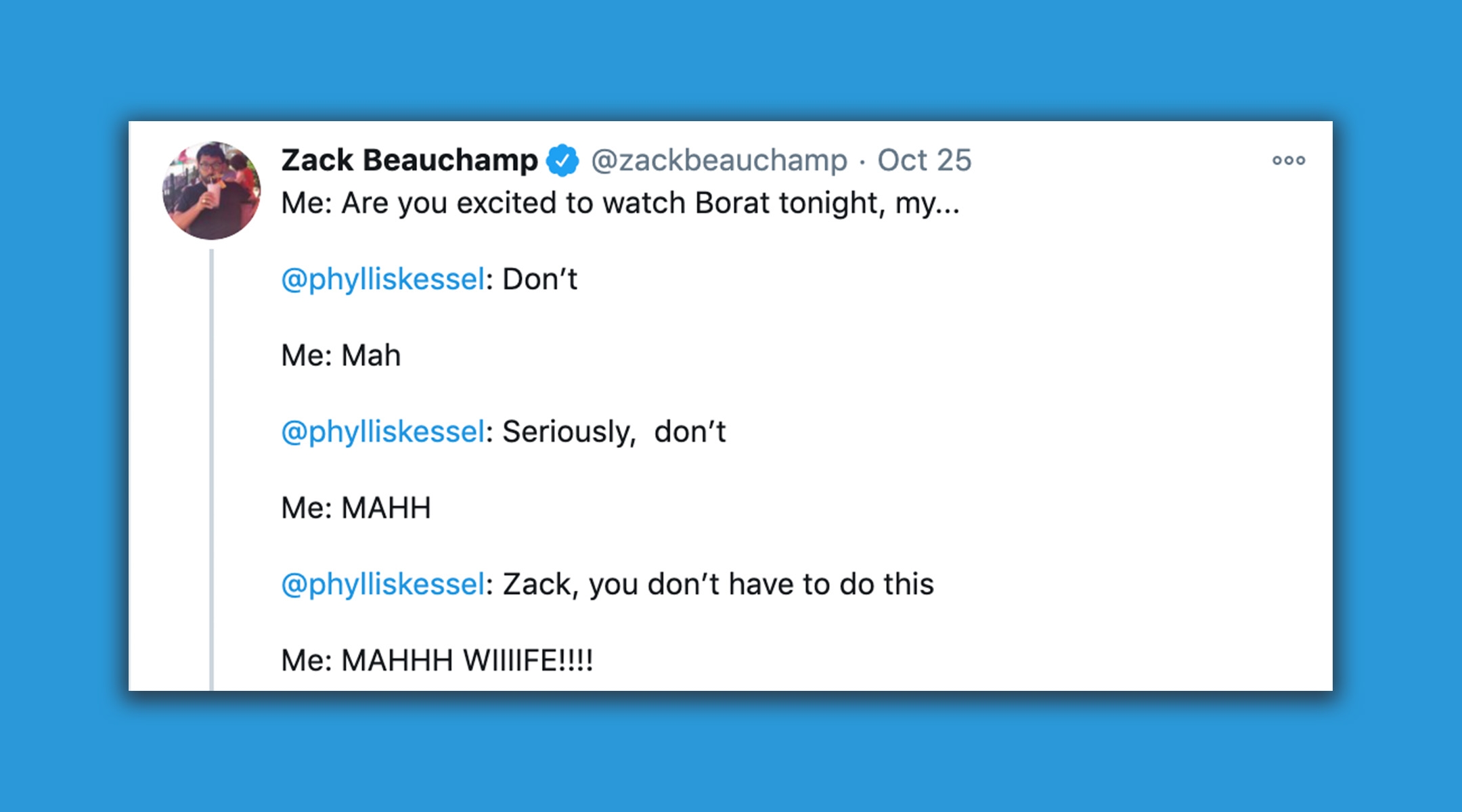 Zack Beauchamp at Vox captures a conversation countless husbands and wives have had since last Friday night.