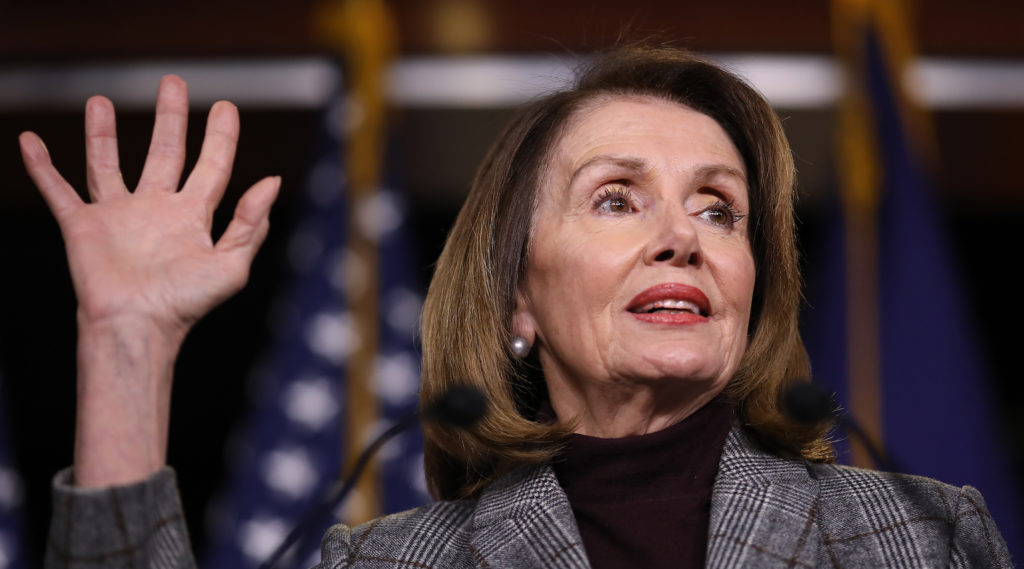 WASHINGTON (JTA) — Democrats are revising a statement on anti-Semitism to include other forms of bias following complaints by caucus progressives that the original resolution unfairly singled out Rep. Ilhan Omar.

Despite the impassioned objections of at least one Jewish Democrat, House Democrats are set to vote on the resolution later Thursday.

“I thought the resolution should enlarge the issue to anti-Semitism, Islamophobia and white supremacy,” Rep. Nancy Pelosi, D-Calif., the speaker of the U.S. House of Representatives, said Thursday in her weekly press briefing.

A draft resolution earlier this week condemned anti-Semitism in the wake of remarks by Omar, a Minnesota Democrat, suggesting that Jews hold dual loyalties or buy political support for Israel. The resolution did not name Omar, who has doubled down on her claim that she is under pressure to pledge “allegiance” to Israel. Omar has apologized for earlier statements that said Israel was “hypnotizing” the world and that pro-Israel groups purchased support through campaign contributions.

Omar supporters, particularly from the party’s progressive wing and among its black caucus, said she was unfairly targeted and has been subject to Islamophobic attacks. They wanted the resolution broadened.

“When a colleague invokes anti-Semitic lies three times, then this body must condemn anti-Semitism,” Deutch said on the House floor. “Anti-Semitism is worthy of being condemned on its own.”

The new resolution forcefully calls out the use of the dual loyalty canard and lists instances in which it has been used against Jews, Muslims, Roman Catholics and Japanese Americans. The action portion of the resolution “rejects the perpetuation of anti-Semitic stereotypes in the United States and around the world, including the pernicious myth of dual loyalty and foreign allegiance, especially in the context of support for the United States-Israel alliance.”

The controversy has roiled Democrats, dividing them along unpredictable lines: Some of Israel’s most reliable supporters spoke out on Omar’s behalf, while at least one of its fiercest critics, including Rep. Betty McCollum, also from Minnesota, rebuked her for not taking into account Jewish sensibilities.

“Rep. Omar has the right to speak freely, and she also must take responsibility for the effect her words have on her colleagues, her constituents, and the policies Democrats seek to advance,” McCollum said in a statement. “She has the power to remedy this situation with her colleagues and prevent it from happening again in the future.”

Sen. Elizabeth Warren, D-Mass., who is running for president, a reliable pro-Israel vote in the Senate, framed her statement as a defense of Omar’s right to criticize Israel.

“Branding criticism of Israel as automatically anti-Semitic has a chilling effect on our public discourse and makes it harder to achieve a peaceful solution between Israelis and Palestinians,” she said in a statement.

Mark Mellman, a longtime Democratic consultant who recently established a group of pro-Israel Democrats, Democratic Majority for Israel, said Israel was not the point and objected to broadening the scope of the resolution.

“As active, loyal Democrats, we find it sad, and frankly disconcerting, that House Democrats cannot agree to a resolution condemning anti-Semitism,” he said in a statement. “Let’s be very clear: the issue at stake here is anti-Semitism, not support for, or opposition to, any policy of the Israeli government. Congresswoman Omar’s remarks did not mention a single policy pursued by the Government of Israel.”

Rep. James Clyburn, D-S.C., the Democratic whip, speaking to The Hill suggested that Omar’s experience, as a refugee from Somalia, lent her concerns greater weight than the descendants of Holocaust survivors.

“There are people who tell me, ‘Well, my parents are Holocaust survivors.’ ‘My parents did this.’ It’s more personal with her,” Clyburn said. “I’ve talked to her, and I can tell you she is living through a lot of pain.”

“I don’t think that the congresswoman perhaps appreciates the full weight of how it was heard by other people,” Pelosi said, “although I don’t believe it was intended in an anti-Semitic way.”