Days before election, Jewish cemetery in Michigan vandalized with ‘TRUMP’ and ‘MAGA’ graffiti

(JTA) — A Jewish cemetery in Michigan was graffitied with the words “TRUMP” and “MAGA.”

The graffiti comes days before the presidential election, in which Michigan is a key swing state, and soon before President Donald Trump’s final campaign rally, which will be held in the Grand Rapids area on Monday.

The 100-year-old cemetery in the western Michigan city of Grand Rapids belongs to Congregation Ahavas Israel, a Conservative synagogue. Rabbi David Krishef says the vandalism was discovered Monday and is presumed to have occurred over the weekend.

Krishef said police had been contacted about the vandalism. But both he and the Anti-Defamation League’s local director both said it was too soon to call the vandalism an act of anti-Semitism.

“It’s Halloween weekend, there was nothing spray-painted that indicated anything specifically anti-Semitic,” Krishef told the Jewish Telegraphic Agency Monday. “Whoever did this may or may not have known that this was a Jewish cemetery.”

Don’t miss developments to this story or similar news — sign up to receive the JTA Daily Briefing in your inbox.

He added, “I don’t want to blow this up into a known and definite incident of anti-Semitism. We don’t know that it was.”

According to photos posted to Twitter by the Anti-Defamation League’s office in Michigan, several gravestones were tagged with red paint reading “TRUMP” and “MAGA,” an abbreviation for Trump’s campaign slogan, “Make America Great Again.” 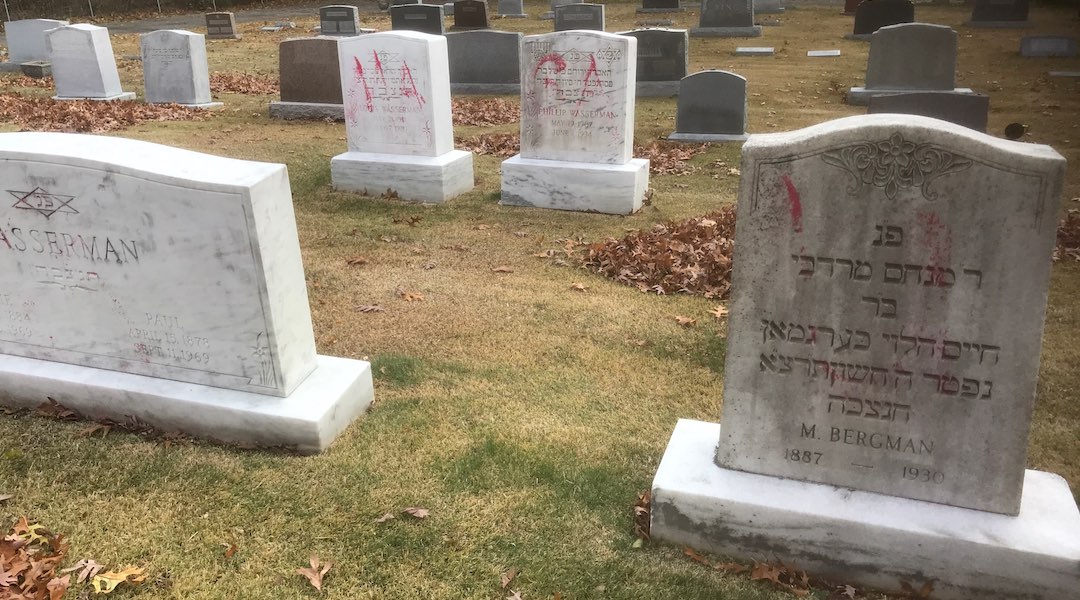 Graves are tagged with graffiti reading “MAGA” at a Jewish cemetery in Grand Rapids. The graffiti was discovered on November 2, 2020. (Courtesy of the ADL)

The vandalism occurred days before Election Day in a swing state that both the Trump and Biden campaigns have fought for.  It also comes roughly one year after the city’s Reform synagogue, Temple Emanuel, was vandalized with neo-Nazi posters by an extremist group, including one that read “A crusade against Semite led subhumans.”

While that case was a clear instance of anti-Semitism, said Carolyn Normandin, regional director of ADL Michigan, the vandalism at the Ahavas Israel cemetery isn’t as clear-cut. But she said the ADL will continue looking into the incident.

“It was definitely vandalism and it was definitely political in nature but we have no reason to call this straight up anti-Semitism because there were no anti-Semitic symbols on the gravestones that were vandalized,” Normandin said. “We’re taking it seriously because it was a Jewish cemetery and there were no other cemeteries or communal buildings in the area that were vandalized at the same time. Why did the vandals choose this cemetery?”

Homeland security officials as well as Jewish security specialists at the ADL and elsewhere have warned of extremist activity surrounding the voting. Last month, a group of extremists was arrested for plotting to kidnap Michigan Gov. Gretchen Whitmer. The alleged leader of the group is from the Grand Rapids area. The leader of another extremist group, a neo-Nazi group that vandalized another synagogue, was arrested last week in another part of Michigan.

Normandin said that to label the cemetery vandalism as an extremist incident would be “a bridge too far” because “there’s nothing to indicate that this was done by an extremist group.”

Krishef said the cemetery has never been targeted with vandalism before. Ahavas Israel is a 120-member-unit congregation that is 125 years old. The city of 200,000 has a Jewish community of just fewer than 1,000, Krishef said.

The vandalism came shortly before Trump was set to hold the closing rally of his 2020 campaign in Grand Rapids. In a statement regarding the vandalism, the Michigan Democratic Jewish Caucus said that “this heinous act was committed on the eve of the 2020 election to send an intimidating message to the president’s opponents, and particularly, Jewish voters,” and added that the “Grand Rapids’ Jewish community will not be cowed by this vile attack on Ahavas Israel.”

JTA has reached out to the Grand Rapids Police Department for more information.