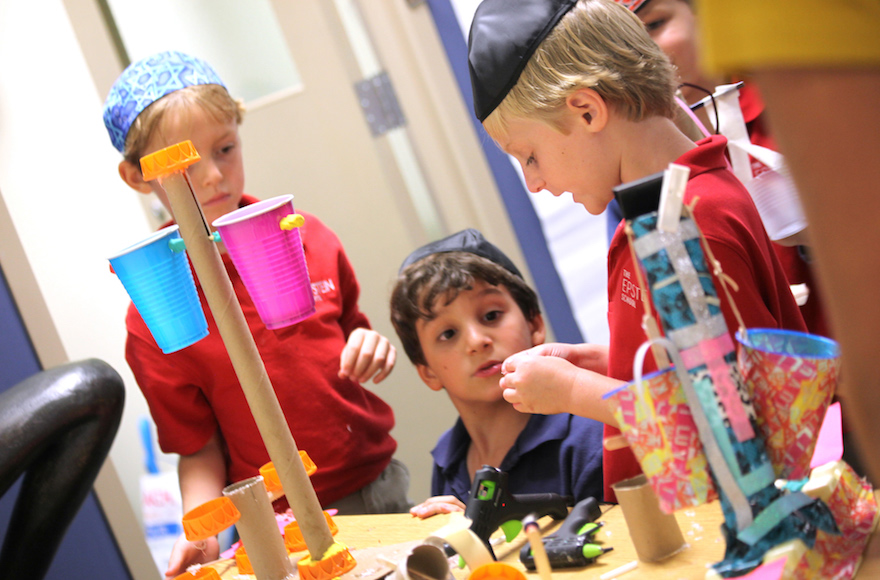 Students at The Epstein School in Atlanta built their own scales as part of a Yom Kippur lesson about the weighing of one’s deeds, part of an effort to link Jewish studies with science and engineering. (Courtesy of The Epstein School)

This story is sponsored by the Avi Chai Foundation.

In a classroom in Atlanta, balance scales symbolize the weighing of one’s actions on Yom Kippur.

At a Nashville school, a dreidel spinning on a CD player plays recordings of the late Jewish scholar and activist Rabbi Abraham Joshua Heschel.

In suburban Chicago, a map of Israel made from cups of water honors Israeli Independence Day. And in Irvine, California, a Hanukkah board game modeled on the popular game Risk shows how a small army of rebels could defeat a much larger and better equipped fighting force — just as the Maccabees had.

These projects at Jewish day schools across the country are examples of how the popular emphasis on STEAM subjects — an acronym for science, technology, engineering, art and mathematics – are being used not just to teach math and science, but increasingly Judaic studies, too.

“STEAM is a way for our kids to engage purposefully and meaningfully with the world around them,” said Daniella Pressner, head of the Akiva School in Nashville.

“How do we see this world, and the shifting needs within this world, with possible solutions and even more questions,” she said. “How do we see somebody walking down the street who might need help and think ‘I can design something that can make their life better.’”

The STEAM educational methodology is meant to teach a range of vital life skills across the full breadth of school subjects. An outgrowth of STEM — which saw science, technology, engineering and math as key competencies to ensure American economic competitiveness in the 21st century — STEAM adds in the sort of innovative and entrepreneurial spirit increasingly prized by many employers, proponents say. It aims not simply to develop knowledge in specific content areas, but to promote habits like critical thinking, collaboration, innovation and problem solving.

The Abraham Joshua Heschel Day School in Northridge, California, used a STEAM approach to address a Jewish real-world problem of its own. Located in an arid area north of Los Angeles, the school lacked access to a running body of water to perform the tashlich ritual, where sins symbolically are cast away on or after Rosh Hashanah.

So three years ago, students devised a system that would recycle water through a kiddie pool using pumps and tubing. Now the pool is part of the school’s annual performance of tashlich. 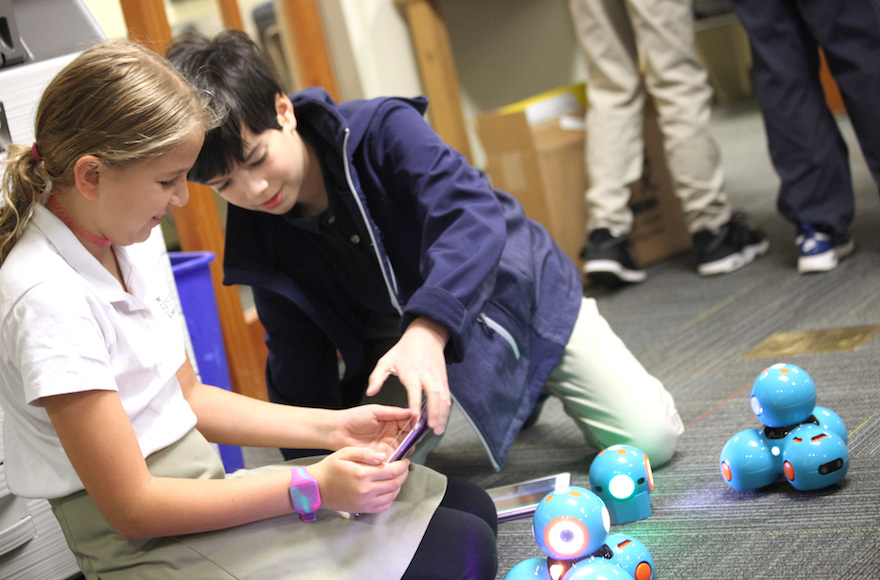 “It’s become a part of our school, a part of our tradition and how we celebrate the High Holidays,” said Scott Westle, Heschel’s rabbi in residence.

Heschel is one of about 10 Jewish day schools that have participated in an initiative focused on STEAM and the Jewish holidays run by the Jewish Day School Collaborative, a project aimed at fostering innovation in Jewish day schools and funded in part by the Avi Chai Foundation. The project aims to promote sharing of ideas about how to better integrate STEAM principles into teaching about Jewish holidays.

“There’s big push in general about getting students to solve problems and be collaborators and critical thinkers,” said Alanna Kotler, a consultant who oversees the JDS Collaborative STEAM project. “Teachers are trying to raise the level of student engagement across the board, in both general and Judaic studies. How do we tap into what they’re interested in? How can we get these kids to really connect to the content in new and different ways? This is a vehicle for that.”

At Irvine Hebrew Day School, students are currently engaged in a yearlong project to develop games connected to the holiday of Hanukkah that the school hopes to eventually sell as a fundraiser. One student came up with a version of Risk. Another created a version of Hanukkah charades. Others created online holiday games using iPads.

In the process, students followed design protocols that wouldn’t be out of place in Silicon Valley: developing prototypes, testing them out with their friends, making adjustments and trying again. Over the summer, they were expected to fine-tune their games and return to school this fall with ideas of how to bring the games to market.

“It’s a way of thinking and working and understanding context,” said Tammy Keces, Irvine’s head of school. “There are actual opportunities to create a business. It’s an entrepreneurial spirit that’s happening in this program. It shows them the kinds of careers where they could actually earn an income. That is kind of the theme of our school.”

At Solomon Schechter in Northbrook, Illinois, students learning the laws of Sukkot used computerized drafting software to design different models of the temporary huts used on the holiday, each consistent with traditional Jewish laws about how a sukkah must be built. Then the students used a 3-D printer to create actual scale models of their designs.

“In a lot of schools, subjects are very compartmentalized,” said Suzanne Mishkin, director of the Sager School, the Schechter’s K-8 division. “What we are trying to do is to show students that, first, we’re Jewish all day long. Second, learning can happen throughout the day. And the learning you do in science or math class can be used in Judaic studies classes, too.”

At The Epstein School, an independent Jewish day school outside Atlanta, a so-called “maker space” is available to students every morning for working on design projects. In one exercise, students learned about Persian menorahs, which could be disassembled quickly during periods when Jews were being persecuted. The students were challenged to build their own quick-disassembling menorahs. One student tried a design that used Velcro to hold the menorah together.

Students at the school also created LED light menorahs, built a model of the Western Wall out of sugar cubes for Israeli Independence Day and designed balance scales to symbolize the weighing of personal actions on Yom Kippur.

“Not every balance scale was perfect. But they all succeeded in the idea of making something to balance their actions,” said Barri Gertz, the school’s STEAM coordinator.

“With STEAM, it’s not just one try and you’re finished,” she said. “You might try something. It doesn’t work. You try again.”