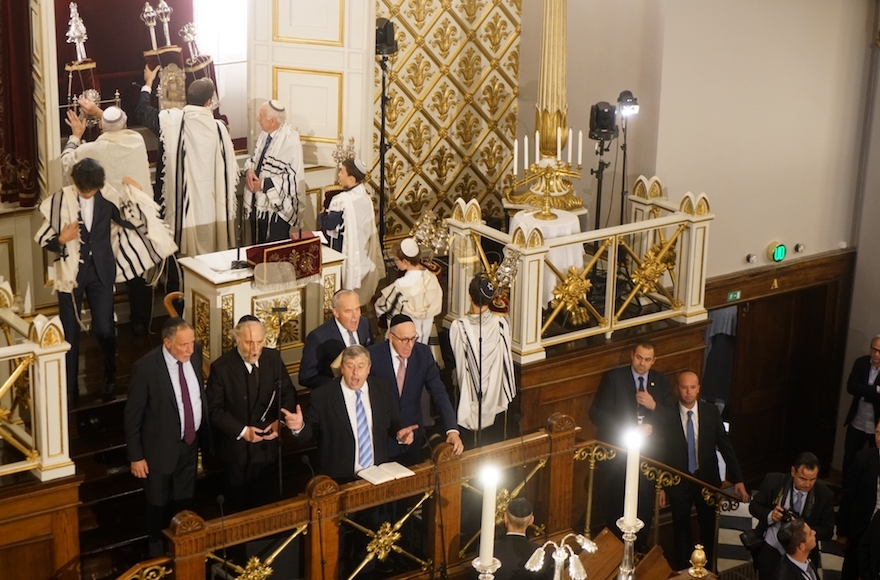 A Torah scroll that fleeing Jews hid 75 years ago at a church Is returned to the Great Synagogue of Copenhagen, Denmark, Oct. 11, 2018. (Cnaan Liphshiz)

COPENHAGEN, Denmark (JTA) — Danish Jews celebrated their community’s rescue 75 years ago in a ceremony Thursday at the country’s main synagogue, the packed sanctuary filled with dozens of survivors and luminaries.

Israeli President Reuven Rivlin was among those on hand at the Great Synagogue of Copenhagen, joining Crown Prince Frederik of Denmark and Danish Prime Minister Laros Lokke Rasmussen, to mark the day in 1943 when the Jews were ferried in boats by fishermen and resistance activists from Nazi-occupied Denmark to safety in neutral Sweden.

“The rescue of the Jews of Denmark is a remarkable event in the history of the Holocaust,” Rivlin said ahead of the synagogue event at a church in Gilleleje, where locals hid 86 Jews in an attic before the Nazis discovered them.

However, most Danish Jews — some 7,200 of them — survived the genocide thanks to the efforts by ordinary citizens who risked their lives, many of them without receiving payment, to rescue Jews in an operation matched nowhere else in Europe.

While waiting for the ceremony to commence, the approximately 700 participants at the synagogue stood in silence when the crown prince entered, resuming to chat only after he sat down.

Rabbi Jair Melchior recited a prayer for the well-being of the Danish royal house followed by a prayer for Israel and its security. Ron Lauder, the president of the World Jewish Congress, also attended.

“The rescue of Danish Jews is not only part of Danish history but of world history,” Rasmussen said. “It was the action of no single person but of a people.”

He added: “An attack on Danish Jews is an attack on Denmark.” The rescue story, he said, “is the solid foundation of the Danish-Israeli relationship. Denmark strongly supported of the formation of the State of Israel.”

Among the survivors was 80-year-old Bent Lewinsky, who was 5 when he boarded a fishing boat to Sweden with his parents.

“The weather was good, just like today. I knew the Nazis were after us, but I was not afraid,” he said. “It was an exciting boat ride that I took, protected by my parents. I am very grateful to this nation.”

Another participant, Helle Fromberg, 64, said the events of 1943 mean “that there’s a totally a different experience here than in the rest of Europe to Jews. A greater feeling of safety and belonging.”

Her mother, Edith, now 93, was rescued. But her father chose to stay with his grandfather, who had been captured, and was sent to the Theresienstadt concentration camp.

“This ceremony has some sadness for those who didn’t make it and for our brethren who perished,” Fromberg said, “but inevitably it’s also a celebration of the rescue, without which most of the people here would not be alive today.”

During the ceremony, children from the community returned a Torah scroll that fleeing Jews took from the synagogue and hid at the Gilleleje church.