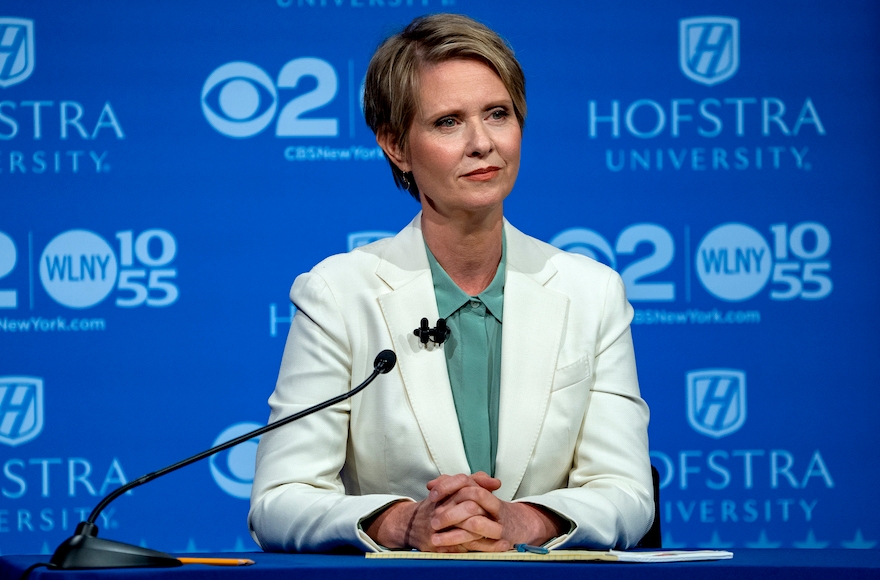 (JTA) — As Cynthia Nixon’s gubernatorial campaign winds down before Thursday’s New York primary, her policy priorities are not the only things showing up in headlines: Her bagel preferences are too.

Nixon was caught placing what seemed like a normal order at Zabar’s on Sunday — one with a lot of lox, cream cheese and capers. But she had it all put on a cinnamon raisin bagel, Gothamist reported.

Nixon, who is hoping to pull off a huge upset and defeat incumbent Andrew Cuomo, was mocked across social media for the unusual marriage of sweet and salty breakfast fare (even by some of her supporters).

look, i'm still voting for her, but we need to talk about how cynthia nixon apparently puts LOX on CINNAMON RAISIN BAGELS, which seems basically criminal to me https://t.co/3n7mj7MAhQ pic.twitter.com/isBVPIWnhu

In case you think people are overreacting to Cynthia Nixon’s bagel order, we aren’t. It’s shocking. And I’m still voting for her.

Putting lox and capers on a cinnamon raisin bagel should constitute a felony in New York.

In an interview with The New York Times on Tuesday, Nixon sounded confused about the uproar.

“I’m stunned. This is my bagel of choice for a few decades now. It’s never been public knowledge, and I really am fascinated that people are so emotional about it,” Nixon said.

Over the weekend, the Democratic Party of New York sent a mailer to Jewish households that accuses Nixon of being a supporter of the Boycott Israel movement and for being silent on rising anti-Semitism. Nixon called the move “disgusting” and responded by stating that she does not support BDS .