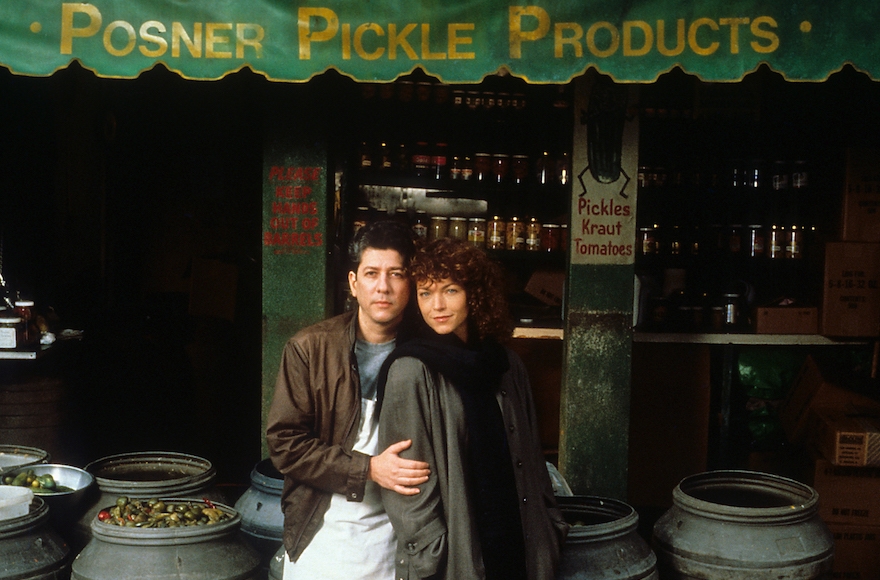 Warning: There are spoilers about “Crossing Delancey” below. However, they aren’t very unexpected, and they don’t take away from the enjoyment of this delightful film.

(JTA) — The movies, at least in contemporary times, don’t have enough great stories of outwardly Jewish love. That’s one of the many reasons why “Crossing Delancey,” the classic 1988 romantic comedy that arrived in theaters 30 years ago this week, remains a cinematic treat worth revisiting.

Much like the previous year’s “Dirty Dancing,” “Crossing Delancey” — directed by Joan Micklin Silver and adapted from a play by Susan Sandler — is an enjoyable, crowd-pleasing romance involving Jewish characters. Like countless other movies before and since, it involves a New York love triangle in which the heroine faces a choice between two very different men.

But unlike most of those movies, the dilemma ends with a Jewish couple.

Furthermore, it doubles as a bittersweet ode to the city’s Lower East Side neighborhood, which even just 30 years ago was a completely different world, still ethnically Jewish and full of little old Jewish mom-and-pop shops.

Amy Irving stars in the film as Isabelle “Izzy” Grossman, a single Jewish woman in her early 30s who’s under pressure to marry and have babies from her hilarious old-world bubbe Ida (played by the Yiddish theater star Reizl Bozyk). An employee at a Lower East Side bookstore frequented by big-time authors, Izzy has aspirations to rise in the New York literary world a bit further uptown.

She soon finds herself with a pair of romantic prospects: One is Anton Maes (Jeroen Krabbé), an urbane, successful European author who is, it’s largely implied, a non-Jew. He wants to simultaneously seduce Izzy and hire her as his assistant. (Ironically, in real life Krabbé had a Jewish mother who lost most of her family in the Holocaust.)

The other, introduced to her by neighborhood matchmaker Hannah Mandelbaum (Sylvia Miles) is Sam “The Pickle Man” Posner (Peter Riegert), a Delancey Street pickle salesman who dotes on her — and is very much a Jew.

Will Izzy go with the guy who represents fame, financial security and respectability? Or will she choose the Jewish fellow, who offers none of those things but is charming and really likes her?

As the film progresses, it’s hard to imagine Izzy choosing Anton. He’s only in a handful of scenes, and doesn’t share the strong chemistry with Izzy like Sam. Not to mention that Sam is a working-class underdog compared to the rich writer.

The romantic comedy genre has never prioritized putting Jewish characters together. The likely reason is that conflict is a natural part of storytelling, as is matching people who are different from one another and telling the stories that come out of the relationship. In nine years of “Seinfeld,” Jerry had one only girlfriend who was clearly identified as Jewish.

But at the end of “Crossing Delancey,” the viewer is left believing that the improbable Jewish couple — the ambitious bibliophile and the pickle man — are going to give it a shot.

There are other aspects of the film that deviate from the norm. Riegert’s character is particularly interesting: The Pickle Man is no schlemiel — he’s handsome, reasonably well-dressed and defies Jewish stereotypes, unlike Izzy’s grandmother or the yenta. Sam speaks in dense, witty monologues, much like other leading male romantic interests of the time period — see Billy Crystal’s Harry in “When Harry Met Sally” and John Cusack’s philosophical Lloyd Dobler in “Say Anything,” both from 1989, for other examples. Sam is also a working-class Jew, something rarely seen on the big screen. 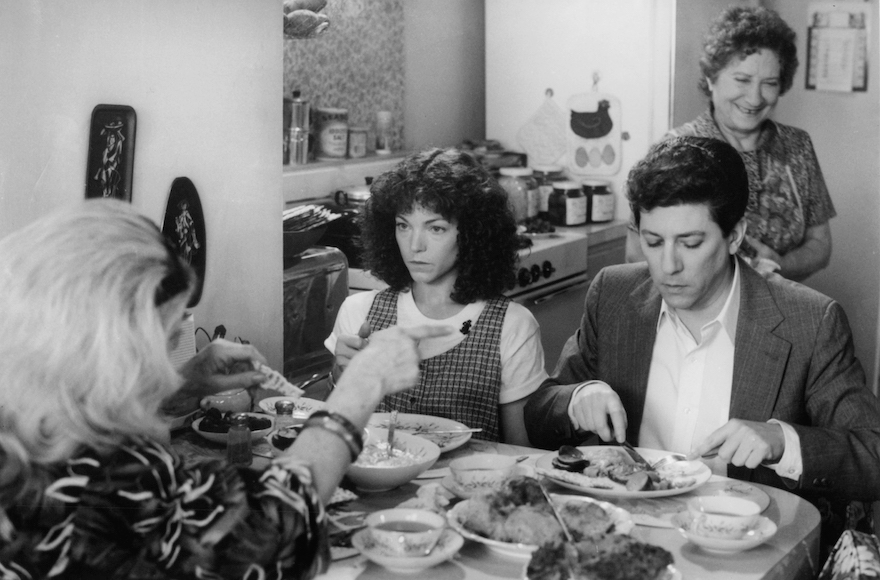 Yiddish theater star Reizl Bozyk, standing, appeared in the film as the Irving character’s Jewish grandmother. It was her only role in a major film. (Warner Brothers/Getty Images)

Beyond that, Sam’s Jewish identity is anything but boilerplate — neither secular nor pious, but a very American Jewish hybrid. The viewer can tell  that he clearly isn’t Orthodox. Yet he tells Izzy that he “made a special bracha” and “said the prayer for the planting of new trees” before their first official date. The line marks him as someone clearly very religious on his own terms. He doesn’t attend synagogue every day, or maybe even every week, but he owns a strong and customized Jewish identity.

(It’s worth noting that Riegert, whose career has spanned roles from “Animal House” to “The Sopranos,” is Jewish. Irving’s father was Jewish, and she was married to Steven Spielberg at the time “Crossing Delancey” was released.)

Beyond showing off the Jewish Lower East Side, the film is an outstanding travelogue of late ’80s New York City, which doesn’t resemble the “Warriors”-style hellhole that’s often depicted, but isn’t quite “Sex and the City,” either. Note especially the famed Papaya hot dog store scene, one of the movie’s great cross-cultural New York musical moments.

In the end, the film is about tradition meeting modernity. Izzy is a modern woman who doesn’t want to be tied down, while Sam is tied to the old neighborhood and represents a comfortably ethnic New York Jewishness. The coming-together of the two could feel forced, as if to make a metaphorical point. Instead the film treats them as two different Jewish individuals who willingly choose each other.

In an age when the battles over intermarriage and Jewish demographics are as intense as ever, as love becomes something to argue about, it’s refreshing to go back to “Crossing Delancey,” a timeless, warm tale of authentic Jewish romance.