(JTA) — Jews in Colombia preparing for Hanukkah saw something earlier this month that no doubt looked very familiar.

On the night of Dec. 7, streets, plazas, windows and porches across the country were lit by thousands of candles in honor of Dia de las Velitas (Day of the Little Candles), a cherished holiday in the Latin American country that officially marks the beginning of the Christmas season.

The holiday dates back to 1854, when Pope Pius defined the immaculate conception to be Catholic dogma, an announcement celebrated by believers around the world with the lighting of candles. But in Colombia, where the holiday is a major celebration, local tradition has it that Dia de las Velitas is influenced by the Jewish holiday of Hanukkah, which falls around the same time of year and is also celebrated by the lighting of candles.

Alberto Antonio Beron Ospina, a professor specializing in Latin American history at the Technological University of Pereira, told the Jewish Telegraphic Agency that the mountainous Antioquia region of Colombia offered refuge to Jews who escaped the Spanish Inquisition. Known as crypto-Jews, these escapees converted to Christianity publicly but continued to practice Judaism in secret.

Their influence, Ospina said, is evident in the regional dialect, which shows signs of Ladino pronunciations, and in local architecture, which features Hebrew letters and Jewish symbols like the Star of David. In the popular Colombian imagination, Antiochians are entrepreneurial and business-minded and have been called “the Jews of Colombia,” Ospina said.

“These descendants of the Jews most probably celebrated Hanukkah without knowing what it was in the privacy of their homes,” he said. “In 1854, Pope Pius marked the 8th of December as the day of Immaculate Conception. But what is particular about Colombia is that the festival starts the night before. This was probably an unconscious way for the church to encrypt and institutionalize Jewish practices in the region.”

Aliza Moreno-Goldschmidt, a Colombia native who now works at the National Library of Israel in Jerusalem, said there is little archival evidence of a significant crypto-Jewish presence in Antioquia. And even if there was, crypto-Jews would have been guided in their practice by the Hebrew Bible, which makes no mention of Hanukkah.

“Common Jewish practices documented included lighting the candles on Shabbat and fasting on particular holidays,” said Moreno-Goldschmidt, who did her doctoral dissertation on the persecution of Jews in Colombia during the colonial period. “I’ve never read a single reference to Hanukkah.”

Schulamith Halevy, who did her doctoral thesis at The Hebrew University of Jerusalem on the descendants of forced converts from the Iberian Peninsula, has discovered evidence of Jewish life elsewhere in Latin America, but she is skeptical that any Jewish influence is behind the rituals of Dia de las Velitas.

“Unless they are lighting only eight candles, instead of a zillion, it’s meaningless,” she told JTA. 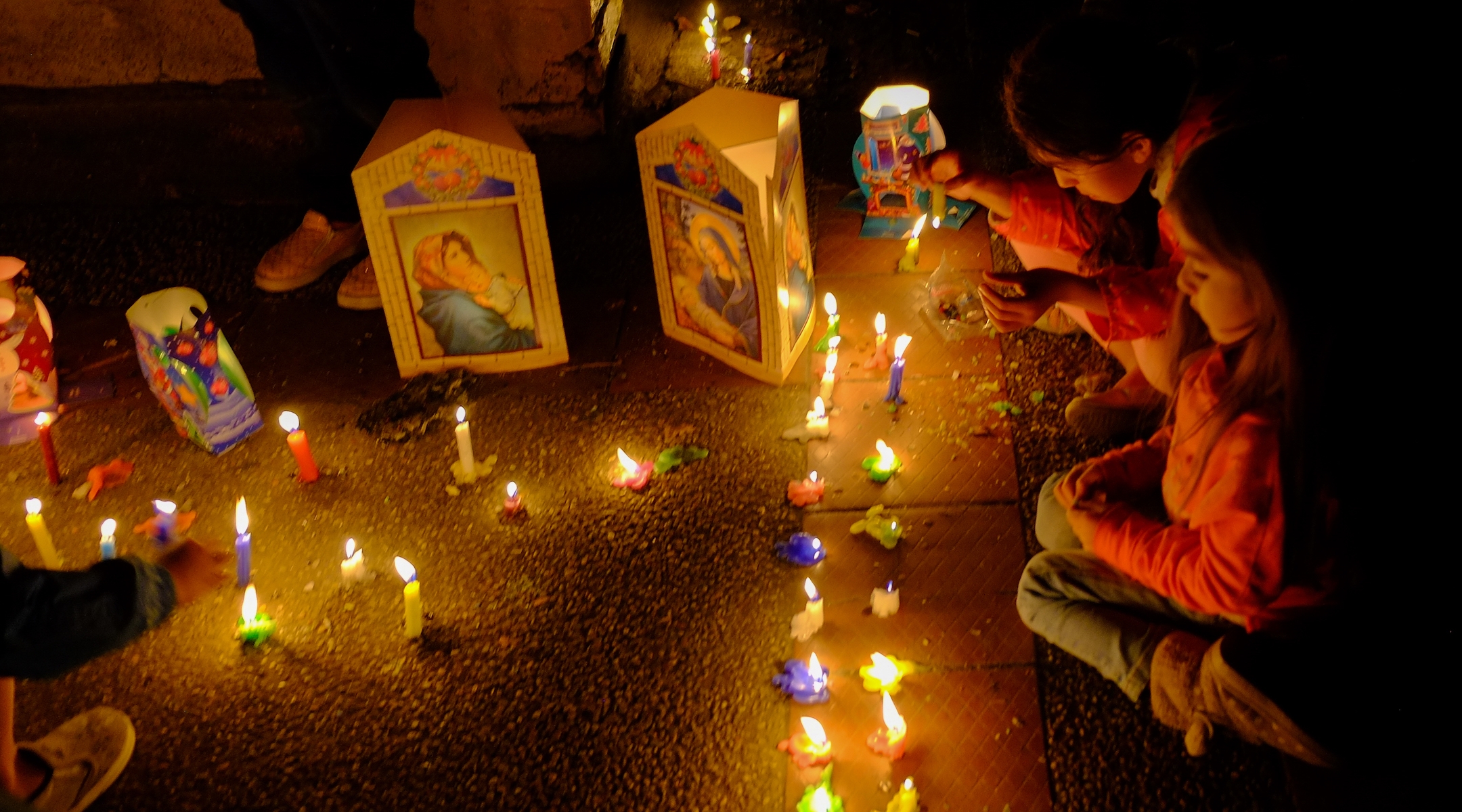 Ospina is unmoved by the absence of hard evidence, claiming that the purging of Jewish identity was a way to neutralize the Jewish element in the dominant Catholic narrative — a practice with a long history in Colombia. In the 1880s, the intellectual and novelist Jorge Isaacs Ferrer, who was active in the independence movement, was persecuted as a Jew, Ospina said. In the late 1890s, the writer Soledad Acosta de Samper gave a talk about the influence of Jews in Antioquia but was censored by the official historians.

“Jewish presence is alive and well until this day,” Ospina said. “Antioquia is proof of that.”

About 5,000 Jews now live in Colombia, according to the World Jewish Congress, most of them centered in the capital of Bogota. Like elsewhere in Latin America, the country’s Jewish communal institutions were established by immigrants from the lands of the former Ottoman Empire and Eastern Europe in the early part of the 20th century..

“Some believe that up to 70 percent of people in the areas of Santander and Antioquia have some form of Jewish ancestry,” said Vivian Tesone, editor of the local Jewish newspaper newspaper Hashavuah.

Tesone said she regularly receives messages from people who believe they are descendants of crypto-Jews and want to reconnect with Judaism.

As is true elsewhere in the region, relations between institutional Jewish communities and the descendants of crypto-Jews — known as “emerging” communities in Colombia — are difficult. People claiming Jewish ancestry have little besides family stories to prove their lineage and Jewish communities are generally reluctant to accept them.

But while the experts may quibble over whether such claims of Jewish ancestry are grounded in historical fact, for some Colombian Jews they are easily believed.

“The Zoroastrians used to light candles during the winter solstice. This is why we Jews celebrate Hanukkah,” said Jack Goldstein, a columnist for Hashavuah and the director of Limmud Bogota. “So I can see no reason why we wouldn’t in turn influence the Christians. Everyone influences everyone.”