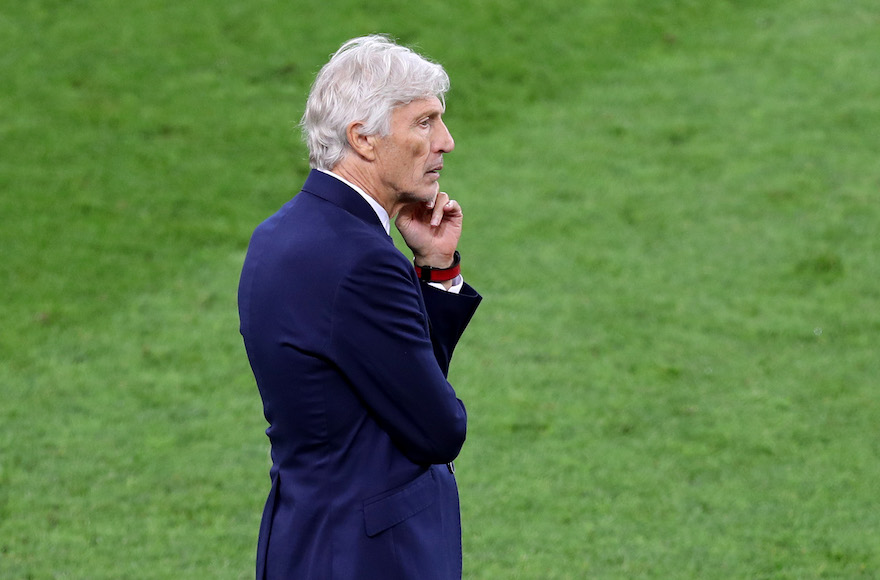 Jose Pekerman coaching Colombia in a match against England at the FIFA World Cup at Spartak Stadium in Russia, July 3, 2018. (Alex Morton/Getty Images)

(JTA) — Jose Pekerman has stepped down as the coach of the Colombia national soccer team after leading the South American country back to international prominence, including two World Cup appearances, during his nearly seven-year run.

Pekerman, 69, an Argentine who was the only Jewish coach or player  participating in the 2018 World Cup, decided not to renew his contract after it expired Aug. 31.

The veteran coach led Colombia to the knockout stages of the past two World Cups after a 16-year absence from the tournament. In June 2016, he guided Colombia to third place in the prestigious Copa America competition, which was held in the United States.

“I’ll always check on how Colombia is getting on, not just in football but also as a country, as a people,” Pekerman said Tuesday at a news conference. “I’ll always be part of this country and I hope the success continues.”

Pekerman was born in Villa Dominguez, Argentina — otherwise known as Moises Ville — a small town in the Santa Fe province settled by Eastern European and Russian Jews in the late 19th century. He has lived much of his life in the Jewish neighborhood of Buenos Aires, Villa Crespo. His grandparents were Ukrainian immigrants.