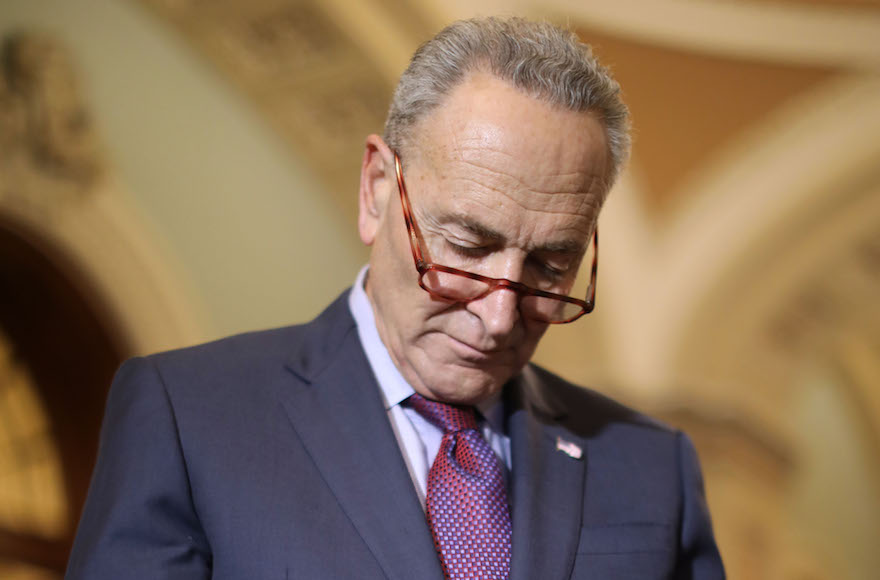 WASHINGTON (JTA) — In retrospect, Chuck Schumer’s first mistake may have been comparing attempted mass murder to a break-in.

Of course, he didn’t know it at the time, on Oct. 23, when the Democratic minority leader in the U.S. Senate first issued his call for civility.

On Twitter, Schumer, the most senior Jewish official in government, shared two headlines: One about a bomb delivered to the home of billionaire liberal philanthropist George Soros, and the other about a break-in and robbery at the Bakersfield, California, office of the Republican majority leader in the U.S. House of Representatives, Kevin McCarthy.

“Make no mistake: Despicable acts of violence and harassment are being carried out by radicals across the political spectrum — not just by one side,” Schumer said. “Regardless of who is responsible, these acts are wrong and must be condemned by Democrats and Republicans alike. Period.”

It is true that in recent weeks, both Republican and Democratic lawmakers have been harassed in public places. But Schumer ran into a buzzsaw of criticism, mostly from his own party, saying that a bomb threat and the theft of office equipment were not equivalent.

“A lot of people are counting down the years until 2020, but I’m looking toward 2022 when we can finally vote this guy out,” Matt Binder, a Mashable writer, said on Twitter, quoting Schumer’s tweet.

a lot of people are counting down the years until 2020, but i'm looking toward 2022 when we can finally vote this guy out https://t.co/pRa1yN0qOl

Luppe Luppen, a liberal lawyer and journalist who has a large Twitter following as @nycsouthpaw, was stunned that Schumer seemed to attach political intent to the break-in.

“Schumer says, apparently without evidence, that they were leftist political radicals,” Luppen said.

One of many bizarre things about this tweet is it goes further than McCarthy’s Instagram post did. McCarthy said the men threw a “boulder” through the window and stole equipment. Schumer says, apparently without evidence, that they were leftist political radicals. https://t.co/9B9cPxm0QA

The Oct. 22 vandalism in Bakersfield does not appear to be political: Police said the two men who threw a boulder through McCarthy’s office window stole electronic equipment and did not access sensitive material.

“The Dems can’t win,” Rob Beschizza blogged at BoingBoing. “They stare at the bombs on their doorstops and their first act is submission to imaginary conservative equivocations before they are even uttered.”

The blowback fed a larger emerging narrative that Schumer is not the Senate leader his party needs as it moves into a crucial and possibly era-defining midterm election.

The charge goes back at least to June, when The Week’s Ryan Cooper asserted that Schumer lacked the “fighting spirit” to stand up to President Donald Trump on the Iran deal, North Korea, bank deregulation and climate change.

“Why bother voting for Democrats, if they’re going to let a Trump enabler like Schumer run the show?” Cooper wrote, channeling disgruntled voters.

This week, GQ’s Luke Darby said Schumer’s civility tweet suggested that the longtime lawmaker’s highest priority as minority leader “seems to be appeasing Republicans.” Darby was particularly perturbed that in August, Schumer agreed to fast-track a group of Trump judicial nominees, making progressives furious. (A Senate Democratic aide told Vox at the time that the judges weren’t all that controversial, and Democrats could use the time they saved to go out on the campaign trail.)

Even that strategy appeared to backfire, when Republicans on the Judiciary Committee convened a hearing this month to consider more conservative federal court nominees while the Senate was technically in recess.

Schumer’s alleged fecklessness in the face of GOP aggression was even the subject of a harsh piece in the satirical newspaper The Onion, which suggested that Schumer did not receive one of the bombs mailed to other liberal icons because he had “never taken a stance meaningful enough to inspire someone to mail him an explosive.”

“Phew, this is where constantly equivocating and avoiding any issue that’s even remotely controversial really pays off,” The Onion imagines Schumer as saying.

Schumer defenders say he is a ferocious and effective fundraiser for the party. They also say he led his colleagues in disciplined opposition to the president on health care and taxes.

On Wednesday, Schumer appeared to be sensitive to the attacks from his own side. (His office did not return a JTA request for comment.) By Oct. 24, he had joined Rep. Nancy Pelosi, D-Calif., the House minority leader, in squarely blaming Trump for promoting divisiveness.

“Time and time again, the president has condoned physical violence and divided Americans with his words and his actions,” the joint statement said. “Expressing support for the Congressman who body-slammed a reporter, the neo-Nazis who killed a young woman in Charlottesville, his supporters at rallies who get violent with protestors, dictators around the world who murder their own citizens, and referring to the free press as the enemy of the people.”

Until the statement, many on the right had been praising Schumer for his even-handed call for civility. Not anymore.

“The two top Democratic lawmakers didn’t mention recent calls by political leaders on the left — including former Secretary of State Hillary Clinton — to abandon civil discourse with Republicans just weeks ahead of the pivotal Nov. 6 midterm elections” was how Fox News reported the statement. Clinton’s call referred to political tactics, not violence.

On Friday, the day a suspect was arrested in the string of bombings, Trump seemed to wonder aloud whether the bomb attacks were a plot to distract from his political messaging.

“Republicans are doing so well in early voting, and at the polls, and now this ‘Bomb’ stuff happens and the momentum greatly slows — news not talking politics. Very unfortunate, what is going on,” Trump said on Twitter. “Republicans, go out and vote!”

“Pathetic,” he said on Twitter. “When potential terrorism strikes, we should be pulling together, not playing politics.”