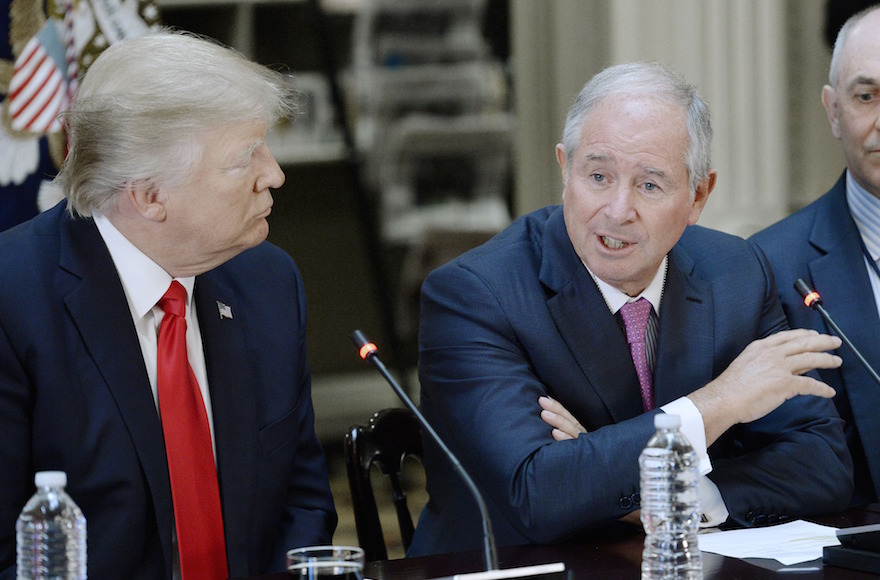 Stephen A. Schwarzman, Chairman, CEO and Co-Founder of Blackstone, speaking as President Donald Trump looks on during a strategic and policy discussion with CEOs in the State Department Library in the Eisenhower Executive Office Building in Washington, D.C., April 11, 2017. (Olivier Douliery/Pool/Getty Images)

Stephen Schwarzman, the Blackstone Group chief executive, and former Las Vegas casino magnate Steve Wynn are on a list of the people that the Chinese have pieced together with whom Trump regularly speaks in hopes of using them to influence the president, The Times reported in an article published Wednesday. Schwarzman has endowed a master’s program at Tsinghua University in Beijing and Wynn once owned a lucrative property in Macau.

The Times cited current and former U.S. officials as saying that China is seeking to use what it is learning from the calls to prevent the escalation of a trade war with the Unites States. Among the things Chinese spies learn are how the president thinks, what arguments tend to sway him and to whom he is inclined to listen, The Times wrote.

A Blackstone spokeswoman, Christine Anderson, did not comment on Chinese efforts to influence Schwarzman, but said he “has been happy to serve as an intermediary on certain critical matters between the two countries at the request of both heads of state.”

Russia, an official told the newspaper, is not working as hard as China to influence Trump due to his closeness to President Vladimir Putin.

Trump’s aides have warned him repeatedly that his cellphone calls are not secure, and they have told him that Russian spies also are routinely eavesdropping on the calls, The Times reported. But aides told the newspaper that Trump, who has been pressured into using his secure White House landline more often these days, has still refused to give up his iPhones.

The president has two iPhones that were altered by the National Security Agency, and a third personal phone that operates like all cellphones.

The post China is eavesdropping on Trump’s cellphone calls with some wealthy Jewish friends appeared first on Jewish Telegraphic Agency.