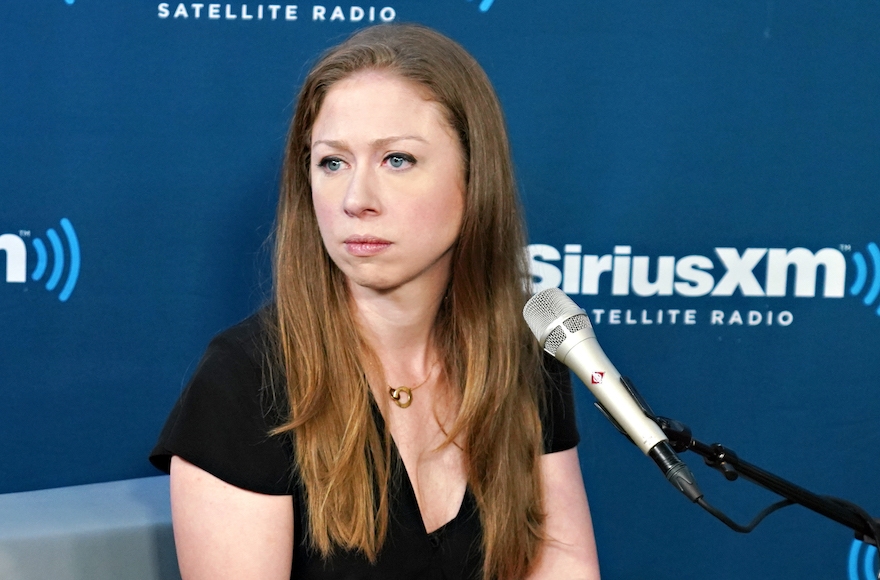 WASHINGTON (JTA) — Chelsea Clinton called Louis Farrakhan’s anti-Semitism “dangerous” and said laughter in response to it “made my skin crawl.”

Clinton, the daughter of former President Bill Clinton and 2016 Democratic presidential nominee Hillary Clinton, was reacting on Twitter to a Farrakhan tweet in which the leader of the Nation of Islam said “I’m not an anti-Semite. I’m anti-termite.”

Comparing Jews to termites is anti-Semitic, wrong and dangerous. The responsive laughter makes my skin crawl. For everyone who rightly condemned President Trump’s rhetoric when he spoke about immigrants “infesting our country,” this rhetoric should be equally unacceptable to you: https://t.co/EvFp4ULugm

Twitter, meantime, said it would not suspend Farrakhan from the site. A BuzzFeed reporter quoted a spokesperson for the company as saying that “Louis Farrakhan’s tweet comparing Jews to termites is not in violation of the company’s policies. The policy on dehumanizing language has not yet been implemented.”

Farrakhan’s tweet posted Tuesday was attached to video of a speech he gave Monday marking the 23rd anniversary of the Million Man March, his 1995 rally advocating empowerment for black men.

“To the members of the Jewish community that don’t like me, thank you very much for putting my name all over the planet because of your fear of what we represent I can go anywhere in the world — I’m not mad at you because you’re so stupid,” he said at the speech in Detroit. “So when they talk about Farrakhan, call me a hater — you know what they do — call me an anti-Semite, stop it! I’m anti termite!”

The audience laughed in response.

“The responsive laughter makes my skin crawl,” Clinton said on Twitter. “For everyone who rightly condemned President Trump’s rhetoric when he spoke about immigrants ‘infesting our country,’ this rhetoric should be equally unacceptable to you.”

The reference to Trump appeared to be an appeal to leftists who have been outspoken in denouncing President Donald Trump’s bigotry while remaining silent about Farrakhan. Most prominent among these have been leaders of the Women’s March, including Tamika Mallory, Linda Sarsour and Carmen Perez.

Farrakhan has a long history of anti-Semitism, and Clinton’s parents absorbed some criticism in August for appearing with Farrakhan on a stage at music great Aretha Franklin’s funeral.

Chelsea Clinton took flak on social media for the appearance. At the time, she responded by saying her parents could not control whom Franklin wanted to attend her funeral, that she denounced anti-Semitism and “I’m not my parents.”

Hi Kate – I’ve heard this a lot today. Almost a drumbeat. A few thoughts: 1) Aretha’s family had every right to invite whomever they wanted to celebrate her life. 2) As I’ve said before, Farrakhan‘s anti-Semitism is wrong. Bigotry is always wrong. 3) … I’m not my parents. https://t.co/HHSZiKuVYM