Celebrating Shabbat in Poway, a week after the deadly shooting

POWAY, Calif. (JTA) — “Those who are standing can remain standing,” Rabbi Yisroel Goldstein joked, a nod to the standing-room-only crowd that had packed Chabad of Poway for Friday night services.

For many of those who filled the sanctuary, showing up was an act of faith, of solidarity, of defiance just six days after a gunman entered the synagogue, killing one and injuring three, including the rabbi.

Goldstein dedicated this “Shabbat of healing” to Lori Gilbert-Kaye, 60, who was killed in the attack. In the synagogue lobby — a scene of carnage the last time the congregation had gathered for Shabbat — women lit candles before sundown under signs reading “Light for Lori.” A large photo of Gilbert-Kaye was perched on a table for all to see.

Despite the tragedy that had taken place in this San Diego-area bedroom community, Friday night’s services were hardly funereal. Congregants wore shades of pink, Gilbert-Kaye’s favorite color, and pinned pink ribbons to their clothing. The rabbi led chants of “Am Yisrael Chai,” the Jewish people lives. Worshippers danced arm in arm — men danced with men, and women with women — to a medley of Jewish melodies. So spirited, it resembled a wedding hora.

“The antithesis of sadness is joy,” Goldstein told the Jewish Telegraphic Agency. “I needed to flip the switch in our community, to begin the healing, and the best way I know how is to dance with such exuberance that the soul begins dancing as well.”

The first Shabbat after the shooting, Goldstein said, felt like a combination of Yom Kippur, a somber High Holy Day when Jews contemplate their deaths, and the joyful Simchat Torah festivities filled with music and dancing.

“For all the survivors, it was a day of introspection, and at the same time it was a celebration of miracles — like the miracle that my grandson was sleeping in his stroller in the line of fire and survived,” the rabbi said. “Miracles” like those worshippers who ushered children to safety during the attack, and like congregants Jonathan Morales and Oscar Stewart, who confronted the gunman and have been credited with helping to prevent further bloodshed.

In the days since the shooting, Goldstein — along with Morales, a Border Patrol agent, and Stewart, a U.S. Army veteran and an electrician — have become folk heroes of sorts. They have been featured in the national media, and on Thursday they appeared alongside President Donald Trump during the National Day of Prayer service at the White House.

Flying home from Washington, D.C., passengers broke out in applause for Goldstein, both of his hands wrapped in blue casts. (He was shot on the hands and lost a finger in the attack.)

Stewart, meanwhile, says he’s been thanked by passers-by while running errands, and that a stranger in line at Starbucks asked to take a picture with him. He’s not used to the attention.

The synagogue, too, now has a national profile — “ingrained in history,” the rabbi said — as the site of the second mass shooting at an American synagogue in six months. The Chabad attack took place six months to the day after a gunman, apparently motivated by his antipathy for Jewish support for immigrants, killed 11 at the Tree of Life complex in Pittsburgh.

Rabbi Avi Weiss, a longtime activist and leader of the liberal wing of Modern Orthodoxy, flew across the country to spend Shabbat in Poway. The New York rabbi had traveled to Paris in 2015 following a siege at a kosher supermarket that killed four, and he was in Pittsburgh the week after the synagogue shooting.

“How could I not be here?” Weiss asked.

Weiss was among the more than 300 people who filled Chabad’s social hall for a Shabbat dinner following Friday services. Also in attendance were Rabbi Simon Jacobson, a best-selling author and the weekend’s scholar in residence, and Peter Yarrow of the 1960s folk trio Peter, Paul and Mary. The musician led those in attendance in an a cappella version of “Blowin’ in the Wind.” 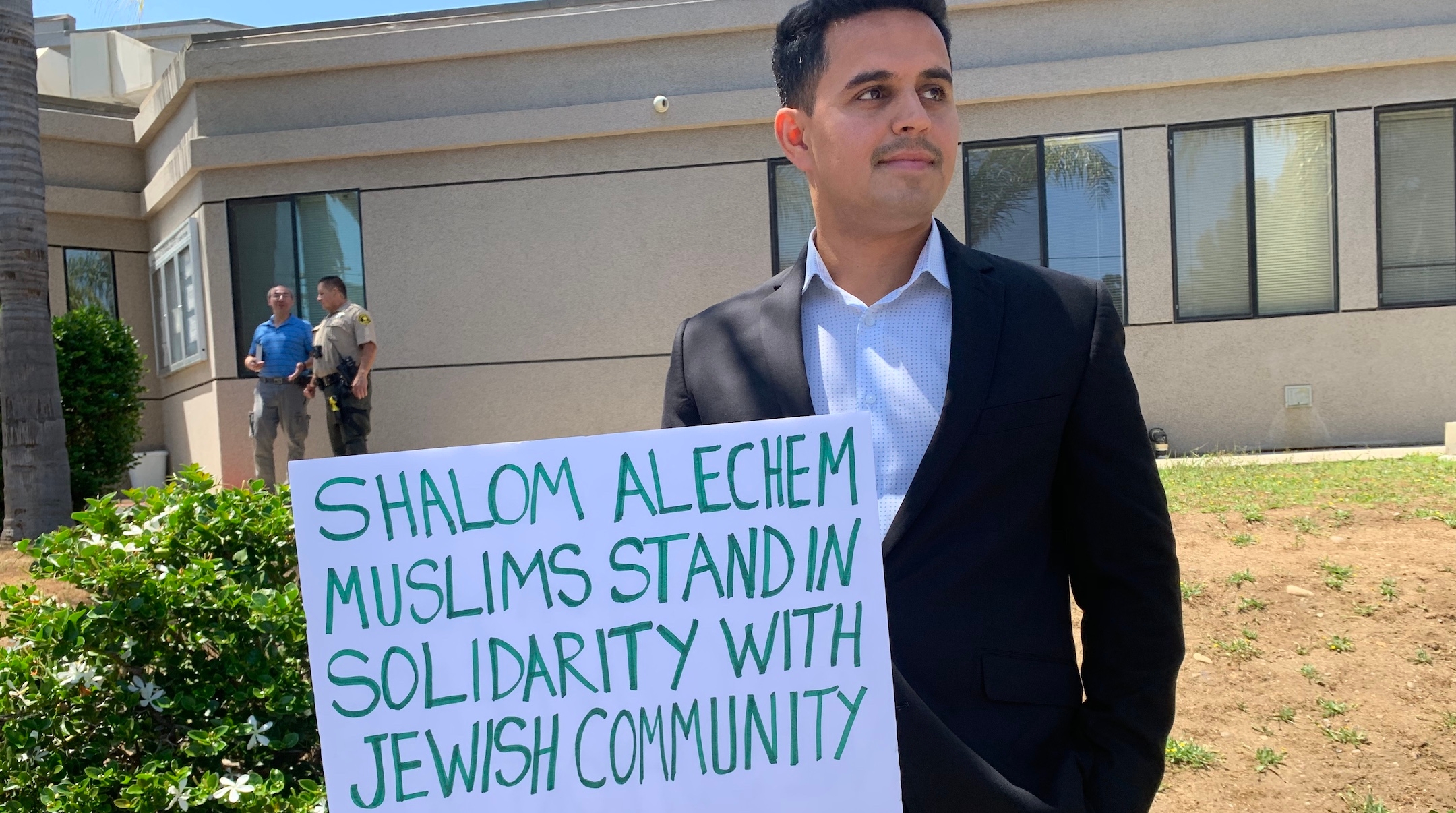 A Muslim attendee of the Shabbat event at the Chabad of Poway shows his support for the Jewish community. (Gabrielle Birkner)

By the following morning, worshippers returning to synagogue were greeted outside by Hamed Arghi, 33, and his homemade placard. “Shalom Alechem,” it read, Hebrew for “peace be upon you.” “Muslims stand in solidarity with Jewish community.”

Arghi, an IT consultant from nearby Oceanside, said that as a Muslim, he wanted to be there for his “Jewish cousins.”

“I think it’s very important for communities to have dialogue and reach out to each other and support each other at all times,” he said. “Hopefully the next time I come here, it won’t be after a tragedy. Never again — that’s my message.”

Many Jewish worshippers, in turn, welcomed him with the nearly identical Arabic greeting of peace: “as-salamu alaykum.”

Inside the synagogue, Goldstein spoke about a moment he shared with Gilbert-Kaye’s 22-year-old daughter, Hannah, at the hospital where the shooting victims were taken. Before he was wheeled into surgery, the rabbi promised that he’d call her every Friday to say “Shabbat shalom,” continuing a tradition Gilbert-Kaye and Goldstein had begun 19 years earlier.

Gilbert-Kaye’s husband, Howard Kaye, and their daughter were at Saturday morning services.

Goldstein said that Chabad of Poway will find ways to honor Gilbert-Kaye’s legacy, ways to heal and ways to grow from this tragedy, but “we’ve got a long road to recover.”

To that end, he announced Saturday that he and his wife planned to see a therapist to work through this trauma. He also said group counseling would be held at the synagogue.

“Being a rabbi for 35 years, I’ve encountered the stigma of people who seek therapy — they think it’s going to denigrate them or make them less of a person,” he told JTA. “But it’s nothing different than going to the dentist for a filling.”

Amid the horror of it all, many local residents are showing support for Chabad and the wider Poway Jewish community, which is home to three synagogues and about 700 affiliated Jewish families, according to Rabbi David Castiglione of the city’s Temple Adat Shalom.

As Shabbat approached, dozens of people lined the route that many congregants walk, or drive, to synagogue on Friday evening — carrying messages such as “Poway Strong” and “Love All.” And hundreds of floral bouquets lined either side of “Chabad Way.” Cards expressing sympathy and support, some signed “Your Christian Neighbors,” covered the walls of Chabad’s social hall.

“My mom and I started crying,” said Shekhtman, 34, a Chabad of Poway member and esthetician. “It brought out so many emotions to see the love for our people. It gives you the feeling that everything is going to be OK.”