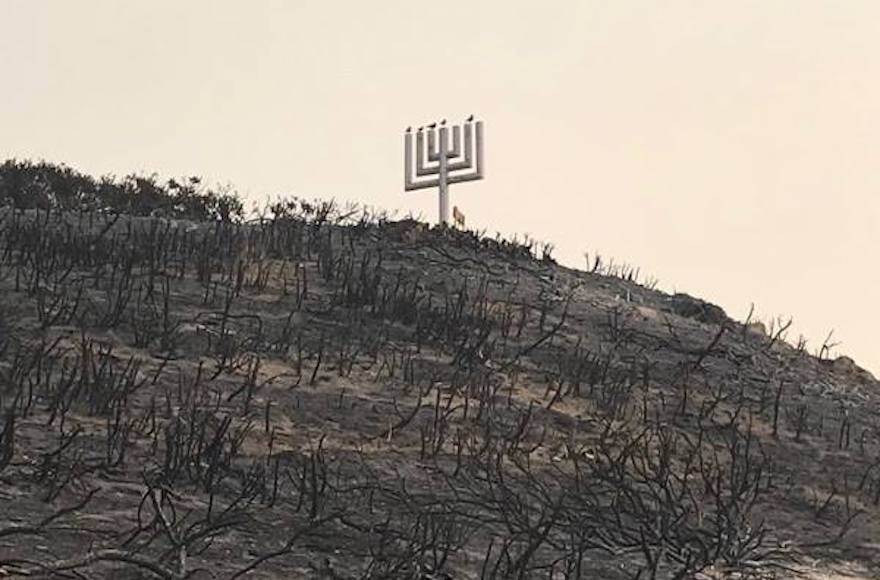 (JTA) — Two camps that suffered major damage in the wildfires that have raged in Southern California sent a message addressed to the “camp family”: We will rebuild and we will endure.

On Sunday evening, the leaders of Wilshire Boulevard Temple in Los Angeles and the camps it runs, Hess Kramer in Malibu and Gindling Hilltop, said that although the full extent of the damages won’t be determined for some time, “we know that it is severe.”

The night before, the temple hosted a special camp-style Havdalah ceremony.

The message said that among the buildings and areas lost at Hess Kramer are two halls, the climbing wall, a library and the ark, along with several staff residences and all but two of the cabins. At Hilltop, all the structures were lost with the exception of two cinder-block staff housing units.

The staff and Torah scrolls had been evacuated from the camps before the fire spread.

“Saturday night’s Havdalah gathering poignantly reminded us that camp is really about the people and what we do together,” the message said. “The location will be a different and temporary one, but we will be together this summer. There will be camp. Then, we will rebuild. Hess Kramer and Hilltop will endure.”

At the Havdalah ceremony, the rabbi of Camp Hess Kramer, David Eshel, said fire has played an important role in Jewish history. The service was live-streamed on Facebook.

Before he knew the extent of the damage to the camps owned by the temple, Eshel told the campers, current and going back many decades: “We remember God spoke to Moses through the burning bush to inspire our people to freedom. God led us through the wilderness with a pillar of fire. This flame will not destroy … rather this flame will light our way to a bright, bright future.”

Campers shared their memories in the comments, all expressing great sadness at the extent of the destruction.

“So many wonderful memories of years as a camper and CIT, especially at Hilltop,” Leslie Cole wrote. “One of my very favorite places is Rabbi Wolf’s Inspiration Point. I used to hike up there, look around and just feel at one with God and the world. Camp was such a formative part of my Jewish identity. Those memories will always be with me and with my kids, who have been and are JCA campers and counselors. Our community is strong and full of life and we will rebuild, as we carry the old memories and make new ones.”

Two people have died in the Southern California blazes called the Woolsey and Hill fires. The fires have destroyed some 90,000 acres and are responsible for the destruction  of 179 homes and other buildings, while another 57,000 remain threatened.

In Northern California, Camp Fire has left 29 people dead and destroyed 113,000 acres as well as 6,453 homes and 260 other structures, including the entire town of Paradise. As of Monday morning it was about 25 percent contained.

More than 300,000 people in total have been forced to evacuate their homes in the northern and southern parts of the state, some 170,000 in Los Angeles County alone.