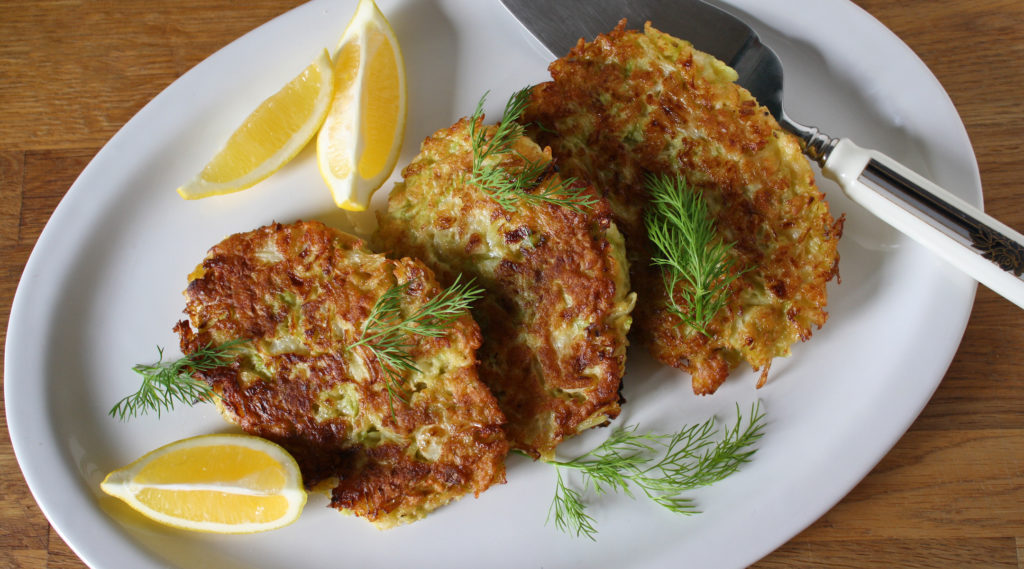 Schnitzel is one of the ultimate comfort foods. It’s hard not to like a food that is fried and golden brown. Schnitzel is commonly made from chicken or veal, but you’ll also find vegetarian versions made from celery root or, in this case, cabbage.

Any recipe for schnitzel always catches my eye, and I’ve often come across cabbage schnitzel in Russian and Eastern European cooking. Meat in that part of the world could be scarce, and cooks came up with creative solutions for making vegetables taste richer.

Cabbage also often was one of the only fresh vegetables available during the long winter months. Even after immigrating to the United States with its year-round abundance of all foods, cabbage is still a favored vegetable among families from the former Soviet Union. We ate a lot of it in my own Russian Jewish home: cooked, fermented, in soups or in salads. I especially love cabbage as a meat stand-in for its texture, volume and versatility.

Cabbage schnitzel can be made with boiled cabbage leaves that are folded into envelope shapes that then get battered, coated with breadcrumbs and fried just like a chicken schnitzel. But my preferred style of cabbage schnitzel requires less work and instead employs a thick batter of shredded cooked cabbage, breadcrumbs and beaten eggs to form the schnitzels. This style of cabbage patty ends up with a schnitzel shape and thickness, golden brown outer layer and crispy edges.

You can serve this unexpectedly rich entrée with a squeeze of lemon and fresh dill for added brightness. Cabbage schnitzel can also be topped with a dollop of sour cream, and I’ve been known to use some hot sauce for heat.

While there are a few steps to this recipe, each one is simple, the ingredients are few, the cooking time is quick and the payoff is big. Cabbage schnitzel tastes little of cabbage and instead transforms into something savory, caramelized, meaty and satisfying.

Directions:
1. Start by shredding your cabbage thin. This can be done with a mandoline, a food processor with the shredding disc attachment, or even with a sharp knife.

2. Fill a large pot with water and bring to a boil. Salt the water generously and then add the shredded cabbage to the boiling water. Cook until the cabbage is tender, about 3-4 minutes. Drain in a colander, then allow the cabbage to sit and continue to drain and cool for at least 10 minutes.

3. While the cabbage is cooling and draining, prepare the remaining ingredients. Grate the onion or chop it very fine. Beat the eggs and reserve.

4. Once cooled, squeeze out any excess liquid from the cabbage and add it to a large bowl. To the cabbage add the onion, beaten eggs, breadcrumbs, flour, and salt and pepper. Stir until the cabbage is evenly and well-coated in the breadcrumb and egg mixture. The mixture should be thick and stick together to be formed into patties. If the mixture is too liquidy, add more breadcrumbs/flour. If you want to taste for seasoning, take a small spoonful of the mixture and cook and brown it in a pan before cooking all of the schnitzels.

5. Over medium-high heat, heat a large skillet filled with a 1/4 inch of neutral cooking oil (like avocado or canola). Once the oil is hot, form the cabbage mixture into schnitzel-shaped patties in the pan, about 1/2-inch thick. Cook the patties in batches, so as not to crowd the pan and cause the cabbage to steam instead of brown. Cover the pan with a lid and brown for 3-4 minutes. Lift the lid, carefully flip over the patties (a fish spatula works well for this), cover again, and brown for an additional 2-3 minutes or until the schnitzels are golden brown and crisp on each side.

6. Once cooked, transfer to a paper towel-lined plate or rack to drain some of the excess oil. Serve the schnitzels immediately, garnished with fresh dill and lemon wedges if desired. Serves 4-6.