BUDAPEST (JTA) — The two main kosher restaurants in this city have had excellent reputations for years.

But neither eatery is particularly cheap, and both require a longer sit-down meal experience. And that felt like a business opportunity to ‪László Györfi.

So Györfi, 51, recently opened a significantly cheaper, no-frills burger shop that he says is the Hungarian capital’s only kosher fast food joint. It’s right around the corner from his competitors, in the 7th District, the center of Budapest’s nightlife.

“Hannah and Carmel are good restaurants, great service, lots of space,” he said. “But often, Israeli families just want a place where they can get a hamburger and fries or a hot dog for their four kids for a fraction of the cost and time. That’s what Kosher MeatUp is there for.”

In 2019, at least 144,000 Israeli tourists visited Hungary, the country’s fourth-highest tally of visitors from non-European countries. That was also a 10% increase over the 2018 tally, demonstrating Hungary’s growing pull on Israeli travelers.

(These statistics provided by the Hungarian government are also likely significantly lower than the reality, as they are based only on Israelis who entered Hungary specifically with an Israeli passport.)

At Kosher MeatUp, customers are not spoiled for choice. For the main course, the options are a hamburger, shawarma or breaded chicken breast. The side dishes are soup, fries or salad.

But even if the business model for Kosher MeatUp is optimal, its timing has been unfortunate. The COVID-19 pandemic stunted the eatery’s brief attempt at a launch last year and eliminated its projected source of income overnight, as both Hungary and Israel shut down touristic air travel.

Tourism to Hungary has picked up in recent months, but the traffic is a mere trickle compared to its 2019 levels. So the reopening of MeatUp has been slow.

“We close at 8 p.m. because staying open past that hour is only losing money,” Györfi said in frustration, noting that normally fast food joints like his enjoy an evening peak in the 7th District. “Business is slow” in the daytime, too, for the eatery’s three employees and its full-time mashgiach, or hired rabbi whose job it is to ensure the restaurant is following kosher rules.

But Györfi, a father of three who also owns a successful kosher bakery outside the center called Semes, says he has “faith in the business model” and is determined to “give it a chance.” For now, he is willing to lose some of his margin from Semes — which sells to locals and Jewish institutions, including schools and nurseries — to keep the lights on at MeatUp. 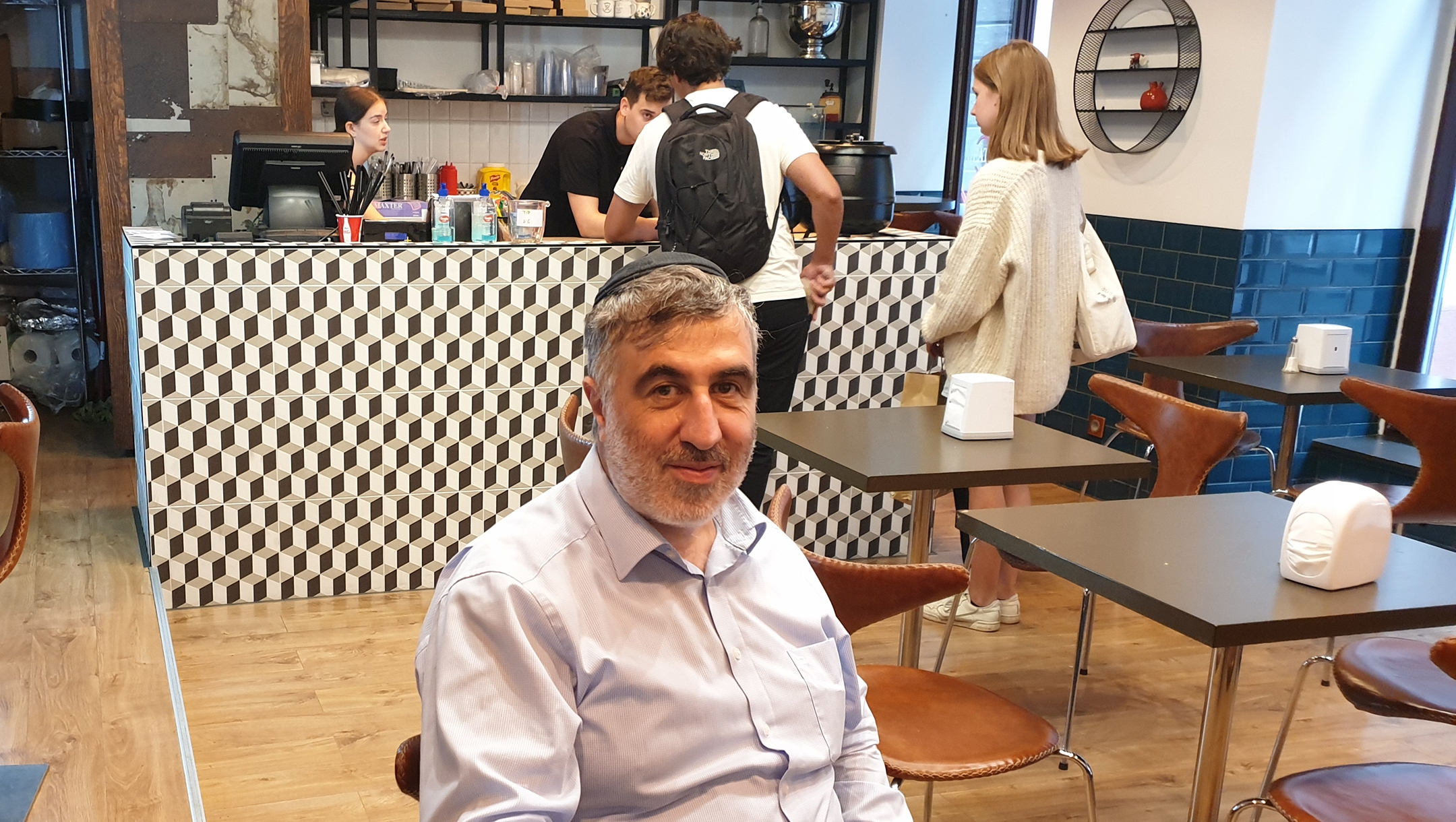 On a recent slow weekday, the staff at MeatUp, young members of the Jewish community who speak Hebrew well, mostly chatted among themselves and checked their phones. The mashgiach sat at a separate table hunched over scripture. The restaurant’s 10-odd tables were clean and empty. Sometimes Györfi, a tall man with a deep voice, sits at one to go over some paperwork while wearing his trademark Ascot cap.

To him, kosher food in Budapest “is a business, but it’s also a mission.”

“When I was younger, there was hardly any kosher food industry, let alone fancy restaurants. So we’re building,” he said.

Many Jewish locals feel that way about most aspects of Jewish Hungarian communal life, which the Nazis came close to erasing entirely, and which Soviet Union Communists then forced mostly underground for decades. MeatUp’s reopening coincided with a string of festive Jewish community events in August and September, including the opening of three new synagogues, a Jewish community center on the banks of the Danube River and a new building at the local Jewish hospital.

It is part of a larger push for renewal that has been going on for about a decade, amid mounting tensions and rivalries between Jewish groups — at times over resources, and at other times over the policies of Hungary’s right-wing government, led by Prime Minister Viktor Orbán.

Györfi has unlikely cheerleaders over at Carmel, his main competitor, which sells higher-end hamburgers and Israeli-style meats alongside its signature Hungarian dishes in a 100-seat cellar space near the famous Dohnay Street Synagogue.

“We don’t know what sort of impact MeatUp might have on Carmel, but even so I’m happy there’s a new kosher restaurant,” said Dániel Preiszler, a 34-year-old businessman who with a partner owns the company that runs Carmel and its kosher dairy eatery across the road, Tel Aviv Cafe.

Like Györfi, Preiszler also believes MeatUp caters to a different demographic than Carmel’s. There’s also a business logic to welcoming competitors, he said, because the more options observant travelers will have, the likelier their numbers are to grow in total.

“But I don’t know, maybe we’ll lose hundreds of dollars a day,” he added. “The availability of kosher food is a basic condition we don’t take for granted here. So it means something every time it’s strengthened.”

Györfi has plans for a follow-up project: A cafe with its own cake shop that would offer kosher variants of the world-famous confectionary traditions of the former Austro-Hungarian Empire, such as the Sachertorte chocolate cream cake, and the Gesztenye Torta chestnut cake.

For now, MeatUp is still relying on Israeli tourists.

“The food’s fine,” one of them, Tomer Ashri, 22, told the Jewish Telegraphic Agency. He was there with a travel buddy.

“It’s not amazing, but it’s a bit cheaper than what it would cost in Tel Aviv,” he said. “It really beats buying vegetables at the supermarket, which is kind of what we expected to do for food here before we heard of this place.”