British Jewry and Labour ask who gets to define anti-Semitism 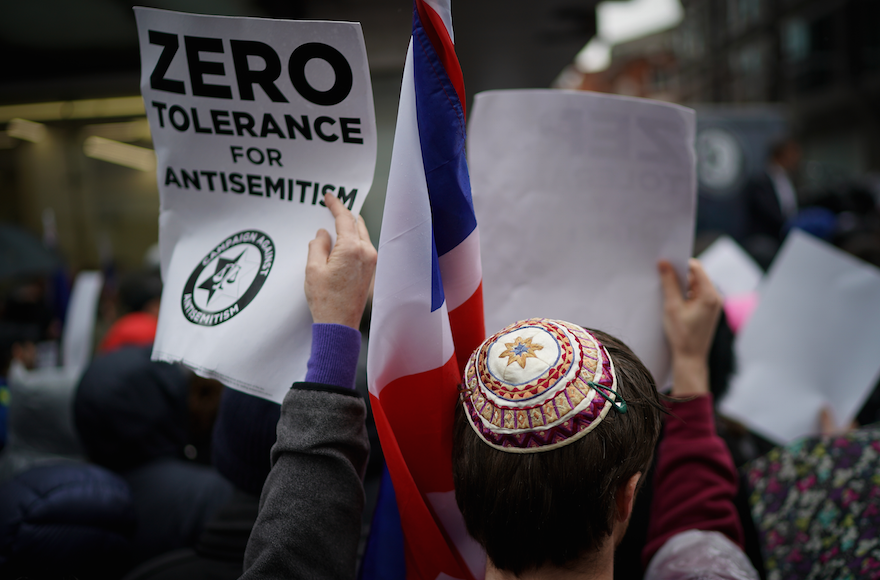 Campaigners from the Campaign Against Antisemitism demonstrate outside the Labour Party headquarters in London, April 8, 2018. (Christopher Furlong/Getty Images)

BOSTON (JTA) — I am a British Jew, though I have spent my adult life in the United States. I’ve found it more comfortable to be a Jew here, but I have always bridled at the notion that Britain is, or is becoming, an inhospitable environment for Jews, whether due to anti-Semitism on the left there or among its large Muslim population.

So I was shocked when I saw the front pages of Britain’s three leading Jewish newspapers all declaring “United We Stand” and featuring identical editorials warning that if the Labour Party, led by Jeremy Corbyn, took power, it would pose “an existential threat to Jewish life in this country.”

What could have prompted such a unanimous and unprecedented expression of concern? Has the Labour Party joined the ranks of some other European political parties on the far left and far right in trafficking in anti-Semitic stereotypes? Has it proposed a ban on male circumcision or the ritual slaughter of animals? Has it denied or downplayed the Holocaust? Or has it called for a boycott of Israel or sanctions against it?

In fact, Britain’s Labour Party has done none of those things. What it has done, specifically its governing body, is promulgate a new code of conduct for its members concerning anti-Semitism. If Labour politicians or activists violate this code of conduct — if they, for instance, say something that the code defines as anti-Semitic — then they could be expelled from the party. Surely this is commendable, not deplorable.

Over the past two years, while the ruling Conservative Party has been feuding over Brexit, Labour has faced accusations of anti-Semitism. Corbyn himself has been fiercely criticized for minimizing the extent of anti-Semitism within the party and failing to root it out. Some of his left-wing supporters have responded by angrily accusing the Jewish community of using charges of anti-Semitism to silence criticism of Israel and undermine Corbyn’s leadership.

This has poisoned the once close relationship between Labour and British Jewry, and led many Jewish voters to abandon the party. To stop this damaging erosion of Jewish support and repair the party’s sullied image, Labour’s leadership is now belatedly — and some would say halfheartedly — tackling the issue of anti-Semitism among its members, particularly those on its left wing, who are most opposed to Israel. To do so, it needs a clear code of conduct regarding anti-Semitism.

The current controversy, however, centers on how Labour’s code of conduct defines anti-Semitism. The definition is based on the “working definition of anti-Semitism” that the International Holocaust Remembrance Alliance, or IHRA, proposed in 2016, and which has since been widely adopted by many governments, including Britain’s. But Labour’s definition omitted some of the examples that the IHRA added to illustrate what could, under certain circumstances, be anti-Semitic — all of which were ways in which discussing or criticizing Israel could be construed as anti-Semitism.

The scathing editorial in Britain’s Jewish newspapers described this “stubborn refusal” to adopt the full IHRA definition as “sinister.” It warned Labour that unless it completely adopted the IHRA definition, it would “be seen by all decent people as an institutionally racist and anti-Semitic party.”

This harsh accusation exacerbates a growing sense of insecurity among British Jews, which leads many to fear that the British Jewish community is much less secure than it actually is.

The outrage over Labour’s definition of anti-Semitism is not about what it says but what it leaves out. Labour’s definition allows for the possibility that it is not anti-Semitic to direct more attention and criticism to Israel’s alleged crimes and misdeeds than toward other democracies (i.e., to have a “double-standard”). Nor would it necessarily be anti-Semitic to claim that Israel is a “racist endeavor,” or to compare its policies and actions to those of Nazi Germany.

In other words, anti-Zionism, or excessive, extreme or exaggerated criticism of Israel’s behavior, is permissible under Labour’s code of conduct. According to the party, it does not want its code to be “used to deny Palestinians, including Palestinian citizens of Israel and their supporters, their rights and freedoms to describe the discrimination and injustices they face in the language they deem appropriate.”

The Labour Party’s caution in devising its code of conduct is understandable. Although it has been rightly criticized for failing to consult with the British Jewish community and listen to its concerns, Labour has an obligation to safeguard its members’ freedom of speech, even if that means permitting statements and views vis-a-vis Israel that many, if not most, British Jews abhor.

The fact that many Jews are justifiably offended by false analogies between Israel and Nazi Germany does not automatically make such analogies anti-Semitic. Calling Gaza a giant concentration camp, for example, is stupid and offensive, but that does not mean that the Labour Party should ban comments such as these and punish people who make them. To do so would surely violate freedom of speech.

Some might argue that if a statement or belief is highly offensive to Jews and they think it’s anti-Semitic, then, ipso facto, it is. That’s what the British Jewish communal establishment declared in its condemnation of Labour’s definition of anti-Semitism: “It is for Jews to determine for themselves what anti-Semitism is.”

While the feelings and sensitivities of Jews should be considered, they are not sufficient. Jews themselves disagree about whether something is anti-Semitic, especially when it concerns Israel and Zionism. Who, then, speaks for Jews? Their communal leadership might be unrepresentative and out of touch with the feelings of many Jews, particularly younger ones. In the case of British Jewry, there are certainly many on the left who are highly critical of Israel and would not be offended if it was characterized as a “racist endeavor” (especially since the passage of Israel’s new nation-state law).

But even if all Jews, or at least the majority, experienced any expression of, say, anti-Zionism as hostile, this should not automatically render anti-Zionism as anti-Semitic. Zionism is an ideology and hence is subject to critique like any political ideology. Opposing a Jewish state is not the same as hating the Jewish people.

To be sure, anti-Semitism can sometimes masquerade itself as anti-Zionism, and condemnation of Israel can occasionally cross the line into anti-Semitism. But not always. It can be difficult to decide when discourse about Israel and Zionism becomes anti-Semitic, and reasonable people with the best of intentions might disagree.

This is largely the reason why defining anti-Semitism has become so complicated and so contentious. For example, the IHRA definition, and its accompanying examples, has been widely criticized on the grounds that it could stifle legitimate criticism of Israel. The definition is not perfect or incontrovertible. In some important respects, Labour’s adoption and elaboration of the IHRA definition is actually an improvement (most notably, it adds a reference to discrimination against Jews).

It is not just Britain’s Labour Party that is grappling with the challenge of defining anti-Semitism and protecting freedom of speech. For the past two years, the U.S. Congress has been debating the Anti-Semitism Awareness Act, which seeks to codify the State Department’s definition of anti-Semitism, based on the IHRA’s, into law. The bill, backed by major Jewish and pro-Israel organizations like the Anti-Defamation League and the American Israel Public Affairs Committee, was passed by the Senate, but stalled in the House of Representatives after an outpouring of criticism, including from the ACLU, which argued that it violated the First Amendment.

The difficulty with defining anti-Semitism today does not mean that we should stop trying. To combat anti-Semitism, we have to agree on what constitutes it. But perhaps this has simply become impossible in our increasingly politically polarized times.

(Dov Waxman is professor of Political Science, International Affairs and Israel Studies, and the Stotsky Professor of Jewish Historical and Cultural Studies, at Northeastern University. Waxman is also the co-director of the university’s Middle East Center. He is the author of three books: “The Pursuit of Peace and the Crisis of Israeli Identity: Defending/Defining the Nation” [Palgrave, 2006]; “Israel’s Palestinians: The Conflict Within” [with Ilan Peleg, Cambridge University Press, 2011]; and “Trouble in the Tribe: The American Jewish Conflict over Israel” [Princeton University Press, 2016].)