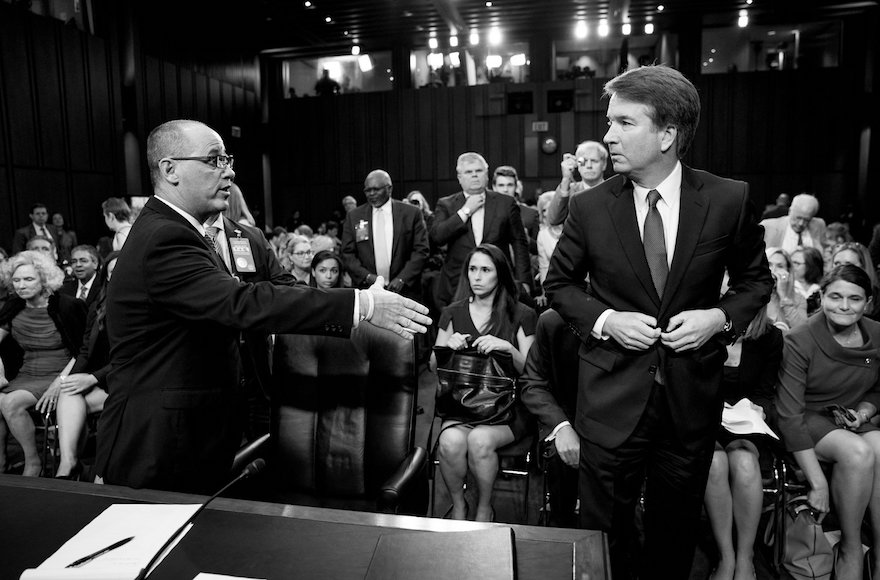 Fred Guttenberg, father of Jaime Guttenberg, who was gunned down along with 16 others during a shooting at the Marjory Stoneman Douglas High School in South Florida in February, reached out his hand to Kavanaugh and introduced himself. As soon as Guttenberg said his name, Kavanaugh turned and walked away.

As Kavanaugh turned, Guttenberg said “My daughter was murdered in Parkland” and then “have a good day.”

Fred Guttenberg, father of Parkland victim, Jaime, tries to shakes hands with Brett Kavanaugh: "My daughter was murdered at Parkland."

White House says an "unidentified individual approached" Kavanaugh, but "before the judge was able to shake his hand, security had intervened." pic.twitter.com/IerpDMOW0h

Guttenberg tweeted about the moment, and Chelsea Clinton responded, saying “I am so very, very sorry Fred this happened.”

Just walked up to Judge Kavanaugh as morning session ended. Put out my hand to introduce myself as Jaime Guttenberg's dad. He pulled his hand back, turned his back to me and walked away. I guess he did not want to deal with the reality of gun violence.

I am so very, very sorry Fred this happened.

Twitter users also debated whether Kavanaugh heard Guttenberg or, in the tumult surrounding the end of an hours-long hearing, was confused by the approach of a stranger who came upon him out of a crowd.

Kavanaugh is a staunch supporter of the right to bear arms and is strongly endorsed by the National Rifle Association. Guttenberg has become a gun control activist following the shooting that claimed his daughter and spoken out against the NRA in public events.

White House spokesman Raj Shah claimed an “unidentified individual approached” Kavanaugh, and “before the judge was able to shake his hand, security had intervened.” Guttenberg denied that security was involved.

Incorrect. I was here all day and introduced by Senator Feinstein. No security involved. He turned and walked away.

Jaime Guttenberg was one of numerous Jewish students and school employees killed in the Parkland shooting.