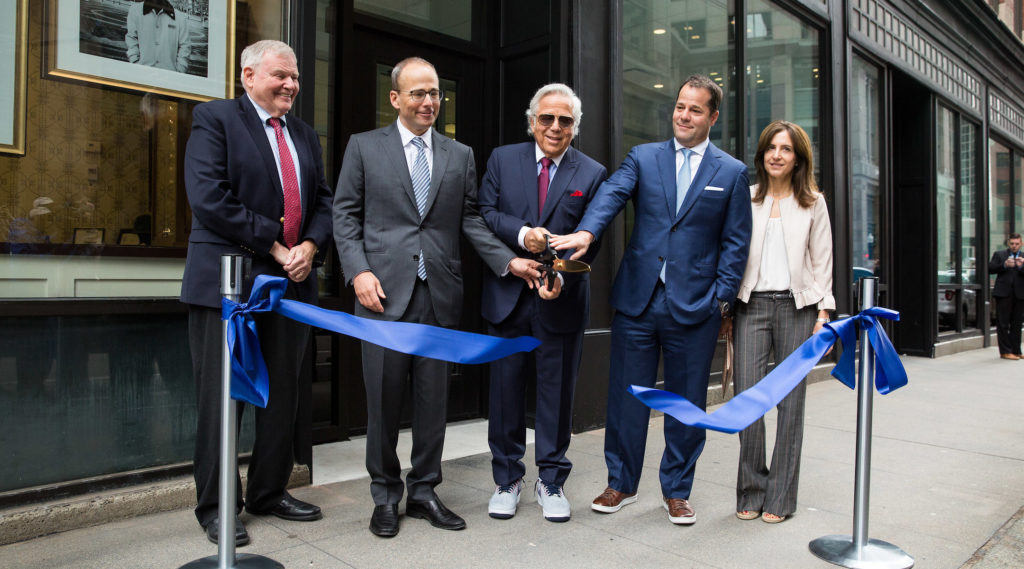 His giving to Jewish causes at home and in Israel is legendary.

And of course he is the owner of the beloved New England Patriots, the NFL’s most successful 21st-century franchise, winner of this year’s Super Bowl and a near-religious force binding together Boston and its suburbs.

The news last week that Robert Kraft, 77, was charged with soliciting prostitution sent shock waves through this city and a philanthropic community, Jewish and otherwise, that saw him as a benefactor and role model.

Ask people for reactions and the word you hear most is “saddened,” followed quickly by a reminder that individuals are presumed innocent until proven guilty. Some point to his age, to the loss in 2011 of his wife of almost 50 years, Myra, to the idea that an indiscretion at a massage parlor should be weighed against the $400 million he has given to charity over the years.

“What has been reported at this time is certainly concerning,” the Combined Jewish Philanthropies, Boston’s Jewish federation, wrote in an email to the Jewish Telegraphic Agency.

“For several generations, the Kraft family has committed their time, energy and resources to support organizations and programs that have benefitted the health and well-being of the citizens of Greater Boston and our region. They have played a transformational role in the life of our Jewish community; helping seniors, families and young people in need as well as working to unite and foster understanding between people of different backgrounds,” the statement read.

The Kraft family donated $10 million to renovate the philanthropy’s downtown Boston building, which was dedicated in a ribbon-cutting ceremony last April attended by Kraft and his sons, Jonathan and Daniel, who serves on the CJP board. The building now houses a boardroom named for Myra Kraft, who also served on the philanthropy’s board. The Harry Kraft Center for Jewish Education was named in memory of Kraft’s father, a longtime and beloved teacher at Congregation Kehillath Israel, the Conservative synagogue in nearby Brookline where Kraft attended religious school as a child. Harry Kraft, who owned the Crown Dress company, also led youth services and served as the synagogue’s president.

CJP did not provide the amount of money donated in recent years by the Kraft family. In 2013, the Robert and Myra Kraft Family Foundation donated $1.12 million. It also supports a program that funds teen trips to Israel, according to the CJP website.

Other area Jewish organizations and religious institutions that have benefited from Kraft’s philanthropy did not respond to JTA’s request for a comment.

Over the years, the Krafts have donated to Kehillath Israel and Temple Emanuel in Newton, both with Kraft family ties, and the Hillel Center of Columbia University and Barnard College, housed in the Kraft Center for Jewish Student Life. Kraft is an alumnus of Columbia.

Kraft Stadium and the $6 million Kraft Family Sports Campus in Jerusalem are physical reminders of his support for the American Football in Israel league.

The family also endowed the Myra and Robert Kraft and Jacob Hiatt Professor of Christian Studies at Brandeis University, Myra’s alma mater; a companion endowed chair in Jewish studies was founded at the College of the Holy Cross in Worcester, the residence of Jacob Hiatt, Myra Kraft’s father, a Holocaust survivor who became a wealthy businessman and philanthropist.

Having a Christian studies position within the Near Eastern and Judaic Studies Department at Brandeis has opened up opportunities for students, said Bernadette Brooten, who holds the Kraft chair in Christian studies at the suburban Boston school. She noted the many Jewish students taking her courses on Christianity and non-Jewish students taking courses she teaches on Jewish subjects.

Brooten scholarship focused on the subject of slavery and sexual exploitation dating back to ancient religious traditions. As the Boston Globe was the first to point out, her field of study provides a troubling juxtaposition with the charges facing Kraft, which came out of a police probe of human trafficking allegations at several massage parlors in and around Palm Beach, Florida.

Brooten told JTA that she was saddened by news of the allegations against Kraft, which she noted he has denied. (Kraft pleaded not guilty on Monday to two charges.) Brooten said the Krafts have been aware of her work and is grateful for their support over decades.

For Brooten, the allegations and wider probe, in which some 100 men were swept up, are not about Kraft but rather raise the broader problem of human trafficking.

“This is shedding light on forced sexual labor,” an issue dating back to ancient history and one that has been tolerated by religions, she observed.

“Slavery is all around us, in ways we aren’t aware of,” she said, including at massage parlors that may be around the corner or in the ways the foods we consume are grown and brought to market.

One welcome development, Brooten said, is that authorities in the Florida case are not treating the women as criminal prostitutes but as victims and providing them with services.

The news of the allegations against Kraft were shocking to Jonathan Sarna, the Joseph H. and Belle R. Braun Professor of American Jewish History at Brandeis. Sarna has known the Kraft family going back decades.

“Robert Kraft is among the most admired Jewish leaders and philanthropists in Boston,” Sarna wrote in an email. “Many of us (including me) knew his remarkable parents … knew his in-laws in Worcester, and knew (and loved) his late wife, Myra. When I think of model Jewish leaders who have given back to their community, I think of Robert Kraft.”

Sarna said it was important to keep in mind that Kraft is innocent until proven guilty.

“My own sense is that we should let the story play out before passing judgment,” he said.