(JTA) — On the surface, “Untogether” is a drama about a pair of young women struggling to come into their own as adults in contemporary Los Angeles. While that setup may sound mind-numbingly familiar to fans of American indie film, “Untogether” — which debuts Friday in theaters in several cities as well as on demand — is different from the norm in a couple of key ways.

First, the film is very Jewish for the genre, both in theme and cast. Second, it represents the anticipated film debut of Jewish writer Emma Forrest, the British-American journalist and novelist who wrote an acclaimed memoir, “Your Voice In My Head,” back in 2011 (it covered, among other things, her relationship with movie star Colin Farrell). She wrote the “Untogether” screenplay and directed the movie.

Real-life sisters Jemima Kirke (best known for her role in Lena Dunham’s “Girls”) and Lola Kirke (best known for roles in “Mistress America” and “Mozart in the Jungle”) play the main characters. Jemima’s character is an ex-junkie and aspiring writer who is dating a doctor-turned-war-memoirist played by “Fifty Shades of Grey” heartthrob Jamie Dornan. Her sister, a masseuse, is dating a much older rock star (Ben Mendelsohn, to whom Forrest was formerly married) but soon finds herself drawn to a liberal rabbi played by Crystal, who’s even older.

While Crystal may have sounded very rabbinical while eulogizing at Muhammad Ali’s funeral back in 2016, and has told numerous rabbi jokes throughout his long career, “Untogether” marks the first time he has ever played a rabbi in a movie.

In addition to Crystal, “Dirty Dancing” star Jennifer Grey has a small role in the film, as does Scott Caan (son of Jewish actor James Caan). The Kirke sisters have a Jewish mother and Israeli grandmother.

Several scenes are set in a synagogue, and at one point, one character suggests that another has “copy-edited the Torah.” The rabbi character, Forrest said, is inspired by an “amalgamation” of Los Angeles rabbis, including David Wolpe, Mordecai Finley and Sharon Brous.

While the film is Forrest’s first to be produced, it was far from her first screenplay. In fact, she’s spent several years in Los Angeles as a screenwriter, and had two different films for which she wrote screenplays fall apart shortly before production. She was able to get the film financed, with herself as director, by agreeing to a low budget and by getting Dornan, then in the middle of the “Fifty Shades” series, on board to star. She described it as “a small film, just with people talking in rooms.”

The London-born Forrest became a music journalist when she was a teenager, later writing three novels and then her memoir before getting into screenwriting. “Untogether” isn’t 100 percent autobiographical, but Forrest did incorporate various inspirations from her own life. 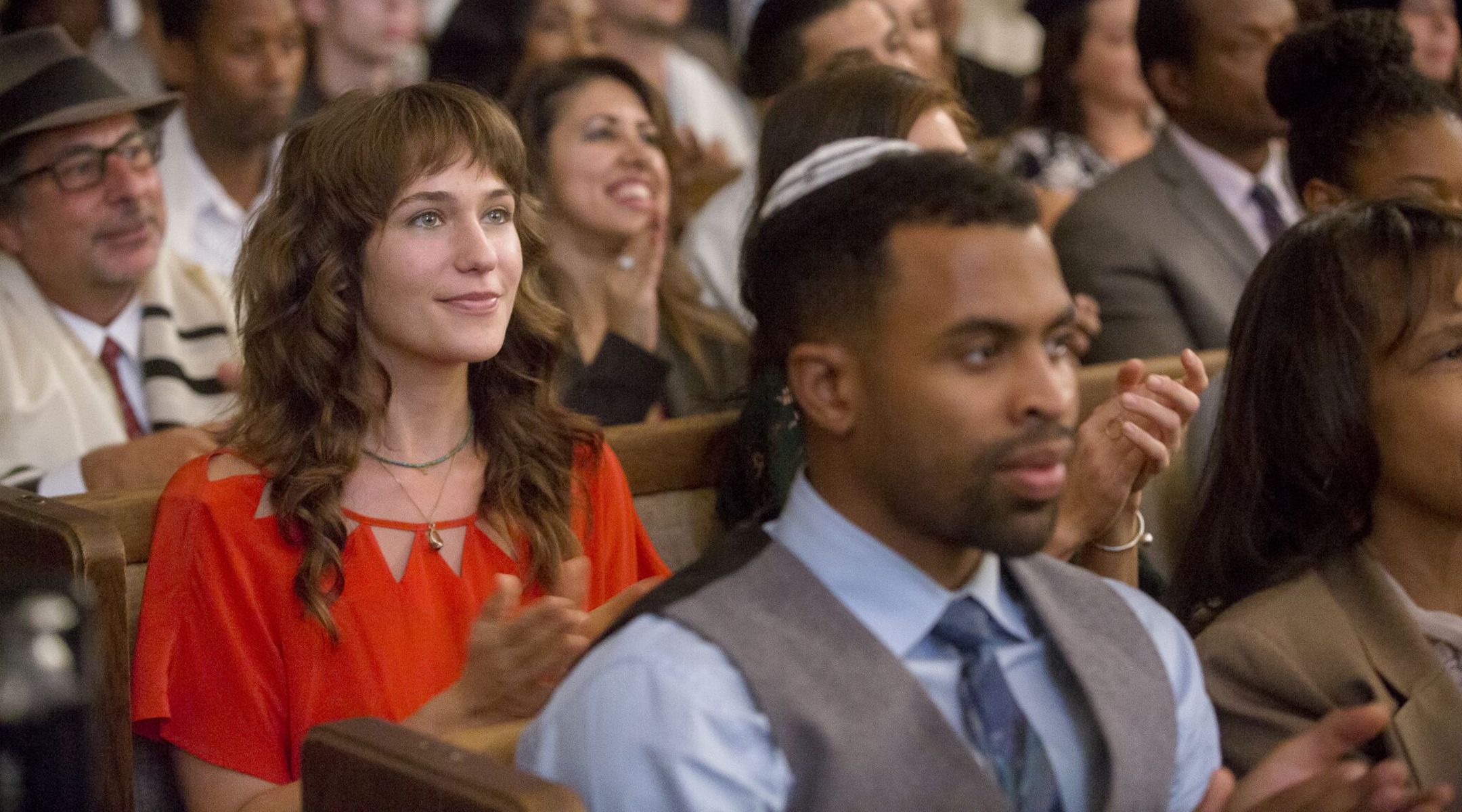 Lola Kirke in synagogue in a scene from “Untogether.” (Freestyle Digital Media)

One big thing that inspired her was her Jewish background. Raised in a Jewish family in London, Forrest wrote in her memoir about how affected she was, at a very low moment in her life, by a synagogue sermon delivered by the well-known Rabbi David Wolpe, of Sinai Temple in Los Angeles. She described Wolpe as “a real moral force” and added that “certainly Billy’s character is the one in the piece who has the strongest moral clarity.”

“[Being Jewish] is a massive part of who I am,” she said. “In the time of my life a long time ago when I didn’t like myself, it was one of the things that I did like about myself … When you’re struggling with how to stay alive, it’s helpful to recognize [that you are] singing the same songs that people had sung a thousand years earlier. And part of that choosing to stay alive was carrying on a bloodline.”

Crystal at first passed on the part, but a rewrite ultimately got him on board, and Forrest said she got valuable input from him, which “really enriched the script and the film.”

As for the Kirke sisters, Forrest knew that she wanted real sisters playing sisters. She also praised the acting the Kirkes do, particularly with their faces.

“[They] have really lively, interesting faces. It has to be a face that you want to stay with. It means a face where you can feel what’s happening underneath the surface,” Forrest said.

She also compared Jemima’s acting style to that of the prolific Jewish actress Rachel Weisz.

As for the line about copy-editing the Torah, Forrest said that came from her own observations about how, as the character says in the film, “there are too many ‘and’s’” in Jewish prayer texts.